Pence arrives in Jerusalem after asking Egypt, Jordan to intercede with the Palestinians 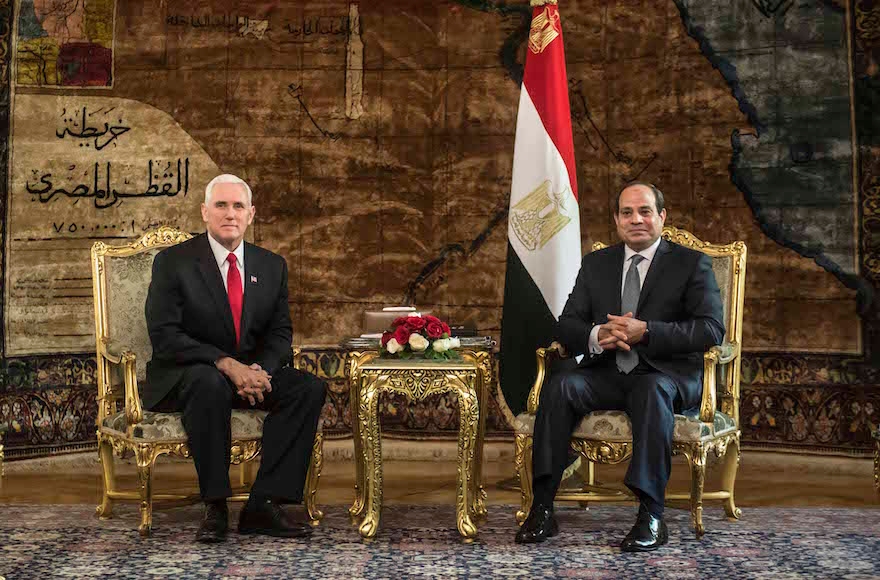 JERUSALEM (JTA) — U.S. Vice President Mike Pence reportedly asked Egypt and Jordan to reach out to the Palestinian Authority on behalf of the Trump Administration.

Pence met over the weekend with  both Egyptian President Abdel Fattah al-Sisi and Jordan’s King Abdullah, where he reassured both leaders that the United States remains committed to restarting peace talks between Israel and the Palesitnians and is committed to a two-state solution if both sides agree.

Pence asked both leaders to tell the Palestinians that the U.S. is interested in restarting direct talks, Bloomberg reported Sunday citing an unnamed source familiar with the meetings.

The report came as Pence landed in Israel amid heightened security on Sunday evening. He was met at the airport by Tourism Minister Yariv Levin.

The heightened security and the closure of some roads in the city will remain in effect until Pence leaves on Tuesday.

Thousands of @Il_police officers will take part in the security operation of the US vice president, who will visit Israel in the up coming days. As part of the preparations, a drill was held to escort & secure the convoy of the Vice President pic.twitter.com/y38nTmv7zI

Israel’s Prime Minister referenced Pence’s visit on Sunday evening in a speech at an ambassadors conference at the Foreign Ministry in Jerusalem.

“This evening we welcome U.S. Vice President Mike Pence, a great friend of Israel. He has landed here and we will welcome him with warmth and pride. I will discuss two issues with him: Peace and security,” Netanyahu said. “On peace, I have a message for Abu Mazen (Palestinian Authority President Mahmoud Abbas): There is no alternative for American leadership in the diplomatic process. Whoever is not ready to talk with the Americans about peace – does not want peace. On security, I have a message for the countries of Europe: I suggest that they take President Trump’s words seriously.”

Ahead of Pence’s impending arrival, Joint Arab List party head Ayman Odeh announced in a tweet that he and the lawmakers from the parties on the List would not attend Pence’s speech to the Knesset on Monday, in protest over the U.S. recognition of Jerusalem as Israel’s capital.

“This is a dangerous man with a messianic vision that includes the destruction of the entire region,” Saturday’s tweet also said.

Pence on Saturday told Egyptian President Abdel Fattah al-Sisi that the United States would support a two-state solution and is committed to restarting the peace process between Israel and the Palestinians.

Pence said after his meeting with Sisi that he told the Egyptian president that the United States is “absolutely committed to preserving the status quo with regard to holy sites in Jerusalem, that we have come to no final resolution about boundaries or other issues that will be negotiated,” the Associated Press reported.

Sisi’s office said the president stressed Egypt’s support for a two-state solution and “the right of the Palestinian people to establish an independent state with east Jerusalem as capital,” according to the Associated Press.

Pence told Abdullah on Sunday morning during his stop in Amman that President Donald Trump made it clear in his announcement on Jerusalem that the United States is “committed to continue to respect Jordan’s role as the custodian of holy sites, that we take no position on boundaries and final status,” and that Jordan would continue to play a central role in new peace efforts.

The king called Pence’s visit a mission “to rebuild trust and confidence” in the two-state solution.

The vice president is scheduled to meet with Prime Minister Benjamin Netanyahu and President Reuven Rivlin, and to address the Knesset. He also is scheduled to visit the Western Wall and Yad Vashem.

Palestinian leaders have refused to meet with Pence in the wake of President Donald Trump’s recognition last month of Jerusalem as Israel’s capital.

Pence postponed a planned mid-December visit to Israel so he could preside over the vote on a tax overhaul favored by Trump. It was believed that the vice president may have been needed to cast the deciding vote in the closely divided Senate, but he was not as the plan passed.