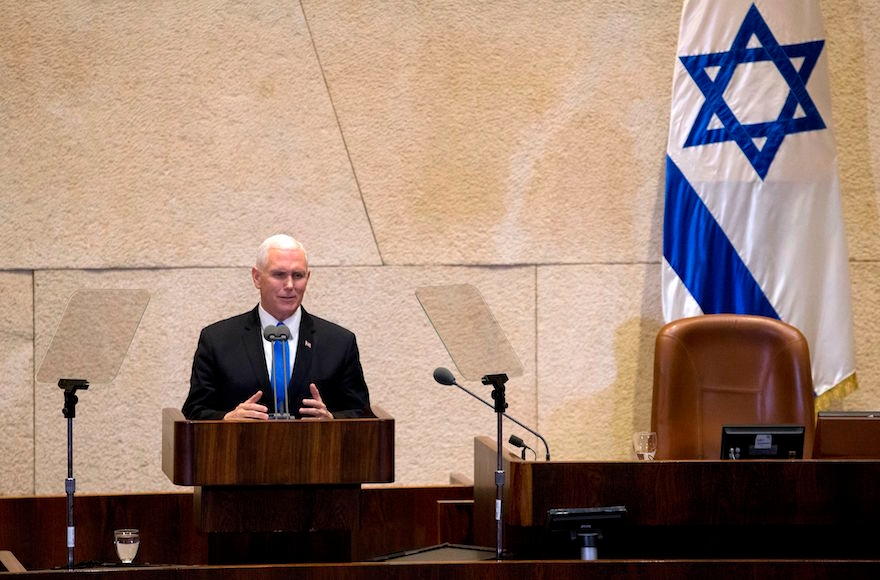 JERUSALEM (JTA) — Vice President Mike Pence said the U.S. Embassy would move to Jerusalem by no later than the end of next year during an address to Israel’s parliament.

In his address Monday, the first by a U.S. vice president to the Knesset, Pence also called the Iran nuclear deal a “disaster” and said “the United States of America will no longer certify this ill-conceived agreement.”

As he began to speak, Arab-Israeli lawmakers from the Joint Arab List party began waving signs protesting the U.S. recognition of Jerusalem as Israel’s capital, leading to their expulsion from the Knesset chamber.

The United States now has its embassy in Tel Aviv, like other nations with embassies in Israel.

Pence called the decision to recognize Jerusalem as Israel’s capital “in the best interest” of peace, saying that “fact is the only basis for peace.” He stressed that such recognition does not change the status quo arrangements on holy sites in the city and that the United States has not taken a position on final status issues such as borders.

Pence reaffirmed that “if both sides agree, the United States of America will support a two-state solution.”

He praised Israel for being willing to come to the peace table and said the U.S. “strongly urge(s) the Palestinian leadership to return to the table. Peace can only come through dialogue.”

Pence asserted that “radical Islamic terrorism knows no boundaries” and called to destroy ISIS at its source. He added that the United States has directly committed more than $110 million to help Christians and other religious minorities in the Middle East to rebuild after years of repressive wars, and called on Israel and others to join the effort to restore a “rich diversity” to the region.

Pence had a message for the people of Iran.

“We are your friends,” he said. “And the day is coming when you will be free of the evil regime that suffocates your dreams and buries your hopes.”

Pence cited passages from the Bible and alluded to biblical history, as well as the parallels between the founding of the United States and Israel, many times during his 30-minute address.

He praised Israel for returning “to the land which your fathers possessed” and noted that all major religions claim Abraham as a forefather.

In talking about Israel’s 70th independence celebrations, Pence recited the Shehechiyanu prayer in broken Hebrew, earning him one of at least a dozen standing ovations from the lawmakers.

Among those in the Knesset chamber for the speech were the U.S. ambassador to Israel, David Friedman; Israel’s ambassador to the United States, Ron Dermer; and the U.S. special envoy to the Middle East, Jason Greenblatt.

At the end of his address, Pence said: “May God bless the State of Israel and all who call these lands their home.”

Prior to his speech to the Knesset, Pence met with Israeli Prime Minister Benjamin Netanyahu at the Prime Minister’s Office in Jerusalem.

Following the meeting, in remarks to reporters, Pence called it “my great honor, on behalf of the president of the United States, to be in Israel’s capital, Jerusalem, following on the president’s historic decision.”

He said that in addition to speaking to Netanyahu about Israel’s shared goals and common interests, “I also am here hopeful, hopeful that we are at the dawn of a new era of renewed discussions to achieve a peaceful resolution to the decades-long conflict that has affected this region.”

Netanyahu thanked Pence and President Donald Trump for their decision to recognize Jerusalem as Israel’s capital.