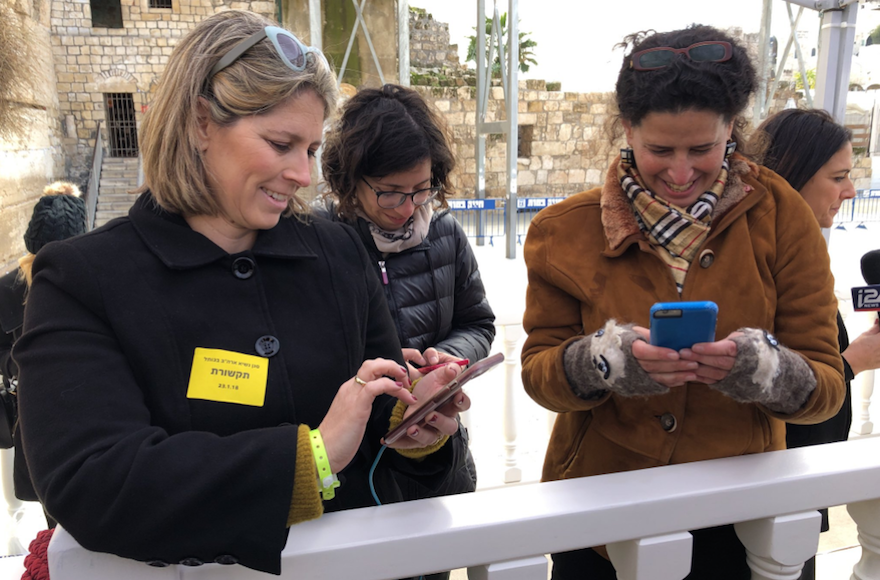 (JTA) — Vice President Mike Pence’s “private” visit to the Western Wall Tuesday was at the center of a very public fracas when women reporters complained that they were segregated from their male counterparts and were unable to adequately cover the event.

Angry at being sent behind a mehitza, or fence, while Pence prayed at the holy site, the women reporters created a hashtag — #PenceFence — and took to social media to lambaste whoever was responsible for separating the sexes.

Separation at the Western Wall. The women stuck in isolation and can not photograph, work. Women journalists are second-class citizens. The American women photographers are frantically yelling at the representatives of the White House. #PenceFence pic.twitter.com/LFh1AkSROE

Tal Schneider, diplomatic and political correspondent for the Israeli financial news site Globes, tweeted that “women [are] stuck in isolation and can not photograph, work. Women journalists are second-class citizens.”

The Western Wall and the plaza that abuts it have been the center of a years-long controversy pitting religious feminists and non-Orthodox denominations against the haredi Orthodox authority in charge of the site. The Western Wall Heritage Foundation essentially runs the best-known section of the Wall as an Orthodox synagogue and uses fencing to maintain the separation of men and women standard during Orthodox worship.

Several journalists asserted that there was no reason to enforce the separation during a visit by an evangelical Christian like Pence.

Factually incorrect to say that “keeping with Jewish tradition at the holy site, female journalists were placed behind a barrier.” I have covered many visits; this was an aberrant first. #PenceFence https://t.co/7t7nolErJz

“Factually incorrect to say that ‘keeping with Jewish tradition at the holy site, female journalists were placed behind a barrier,'” wrote journalist Noga Tarnopolsky, quoting the Jerusalem Post. “I have covered many visits; this was an aberrant first.”

Allison Kaplan Sommer wrote in Haaretz, “The justification for keeping the genders separate during the Pence visit was a weak one.” She noted that the site had been cleared of non-VIP visitors and, unlike during a previous visit by President Donald Trump’s daughter Ivanka and her husband Jared Kushner, who are both observant Jews, there was no reason to think that Pence or his wife Karen required separate-sex accommodations.

In another tweet, Schneider asked, “[N]o worshipers are here today so what’s the point in shoving us behind the fence?”

I guess people here are concerned I’m gonna grab a guy and kiss him or maybe force my female presence at him. Btw, no worshipers are here today so what’s the point in shoving us behind the fence? #PenceFence pic.twitter.com/YsdYVV0vCH

Nevertheless, the Western Wall Heritage Foundation defended its actions, telling Israeli’s Channel 10 that it had made an effort to grant “maximum accessibility” to journalists of both sexes and said it “rejected any attempt to divert the discussion away from the important and emotional visit of the U.S. vice president and his wife to the Western Wall.”

The dispute was magnified by a set-up that allowed male reporters and a temporary canopy to block the women’s view of Pence at the Wall. Tarnopolsky tweeted, “Our male colleagues are not saying a word. They are happy to stand in front of us blocking our view.” Only after the #PenceFence tweets started making the rounds did someone think to get the women chairs to stand on, and to remove the canopy.

“The incident was a last-minute public relations black eye that was utterly avoidable,” wrote Kaplan Sommers. “It seemed that the American embassy in Israel, which set up the press arrangements in cooperation with the rabbinical authorities at the Wall, had paid little attention to the grumbling of female journalists back in May, when U.S. President Donald Trump and his family visited the wall. During that visit, too, women and men, including journalists, were completely separated.”

Some activists compared the reporters’ plight to their own battles with the Wall’s haredi authorities.

“Today, senior women journalists from Israel and abroad were discriminated against,” Anat Hoffman, chairperson of Women of the Wall, wrote in a statement. Women of the Wall has fought a long legal battle to allow women to pray at the wall as they wish.

“Today, they’ve experienced first-hand what happens to a woman who challenges the ultra-Orthodox monopoly of the Western Wall,” Hoffman added. “Now they too know, that a woman who strives for gender equality in Israel has to bravely face the heart of discrimination at the center of gravity.”