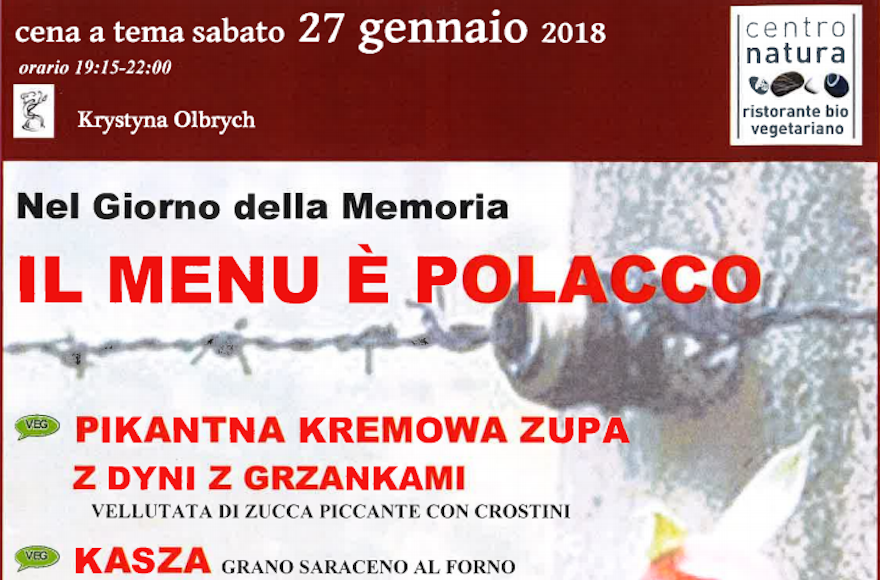 (JTA) – After a wave of protests on social media, a restaurant in Bologna, Italy, cancelled a “Polish menu” dinner it had planned to mark International Holocaust Memorial Day.

“On the Day of Memory, the menu is Polish,” an ad for the Jan. 27 meal stated. The text of the menu was superimposed on a background photo featuring Auschwitz-style barbed wire and a rose.

International Holocaust Memorial Day is marked on Jan. 27, the anniversary of the liberation of Auschwitz in 1945. In Italy, the date is commemorated with educational programs, lectures, concerts, exhibits, publications, and other initiatives, including school trips to Auschwitz.

Whether or not they meant to honor Poles murdered in the Holocaust, including 3 million Jewish citizens and 1.9 million non-Jewish civilians, the restaurant stumbled into an extremely sensitive area for Poles: Death camps in Poland were established and run by the Nazis, and Poles are adamant that it not be referred to as Polish.

The restaurant of the Centro Natura wellness center, which serves organic vegan and vegetarian food, offered the Polish menu as one of its Saturday night “themed dinners.” The menu included spicy pumpkin soup, kasha cooked “in the oven,” vegetarian seitan cooked like pork and served with potatoes, and cheesecake.

A website for Poles in Italy first wrote about the dinner. The story was picked up by media in Poland, sparking a wave of angry comments on social media, including on the restaurant’s Facebook page.

“Once you are convinced that commercialization of Auschwitz memory reached its limits and nothing new can be invented by humanity, there always comes a big surprise,” Tomasz Cebulski, a Polish scholar in Krakow whose doctorate work focused on post-Holocaust Auschwitz, wrote on his own Facebook page.

On Wednesday, the restaurant posted an apology on its Facebook page, saying it had been taken aback by the comments and that its aim in offering the menu had been misunderstood. It then announced on Facebook that the event had been cancelled. Natura Center, the statement said, “has always had respect as its founding principle.” Proposing a Polish menu to mark Holocaust Memorial Day had provoked “in good faith, a most unfortunate misunderstanding,” it said.

“The dinner is cancelled to confirm that it was not our intention to offend anyone. We apologize to everyone,” the statement read.