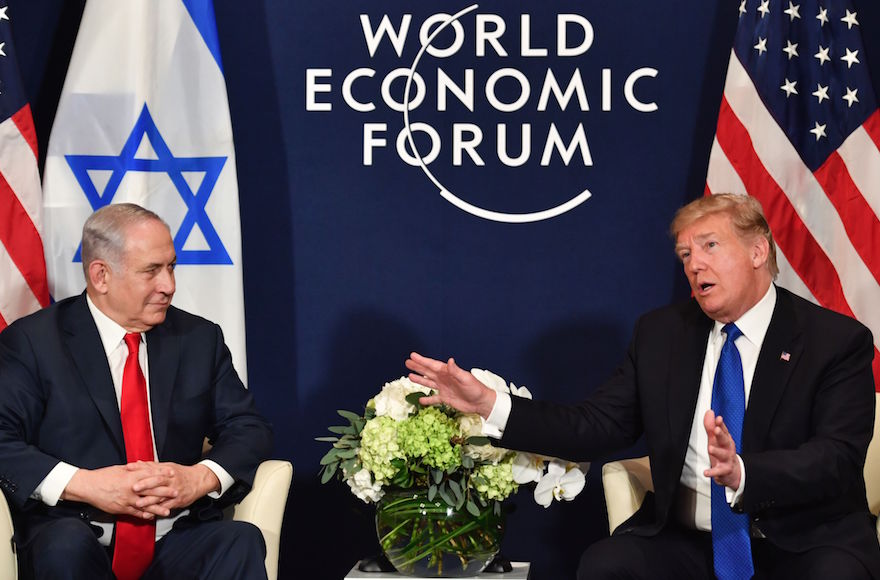 (JTA) — President Donald Trump said Palestinians disrespected Vice President Mike Pence when they snubbed him this week and threatened to cut off assistance to the Palestinians unless they returned to the negotiating table.

“When they disrespected us a week ago by not allowing our great vice president to see them and we give them hundreds of millions of dollars in aid and support, tremendous numbers, numbers that nobody understands, that money’s on the table, that money’s not going to them unless they sit down and negotiate peace,” Trump said Thursday at a meeting with Israeli Prime Minister Benjamin Netanyahu at the World Economic Summit in Davos, Switzerland.

Palestinians declined to meet with Pence during his visit to the region, blaming Trump’s decision last month to recognize Jerusalem as Israel’s capital. Trump has since threatened to cut all funding to the Palestinians, and in recent weeks, the administration froze $65 million in U.S. funding for UNRWA, the organization that delivers relief to Palestinian refugees and their descendants. It is allowing another $60 million to go through.

Trump suggested that should negotiations resume, Netanyahu would have to come up with concessions. “You win one point,” Trump said, looking at Netanyahu and apparently referring to his recognition of Jerusalem as Israel’s capital, “and you’ll give up some points later on in the negotiation if it ever takes place. I don’t know that it ever will take place.” He also said he believed Israel wanted to negotiate peace.

Pence said during his Israel trip this week that the United States would move its embassy to Jerusalem to 2019, and Trump added some detail on Thursday. “We anticipate having a small version of it open by next year,” Trump said, apparently confirming reports that the embassy will temporarily be in a building already owned by the United States, while a larger new embassy is built.

Netanyahu thanked Trump for recognizing Jerusalem as Israel’s capital and promising to move the embassy, for his support for Israel’s position on the Iran nuclear deal and for U.S. support at the United Nations.

“As you finish your first year in office, I want to say that I look forward to continuing our remarkable, tremendous friendship in the years ahead, and I want to express the appreciation of the people of Israel to you,” said Netanyahu.