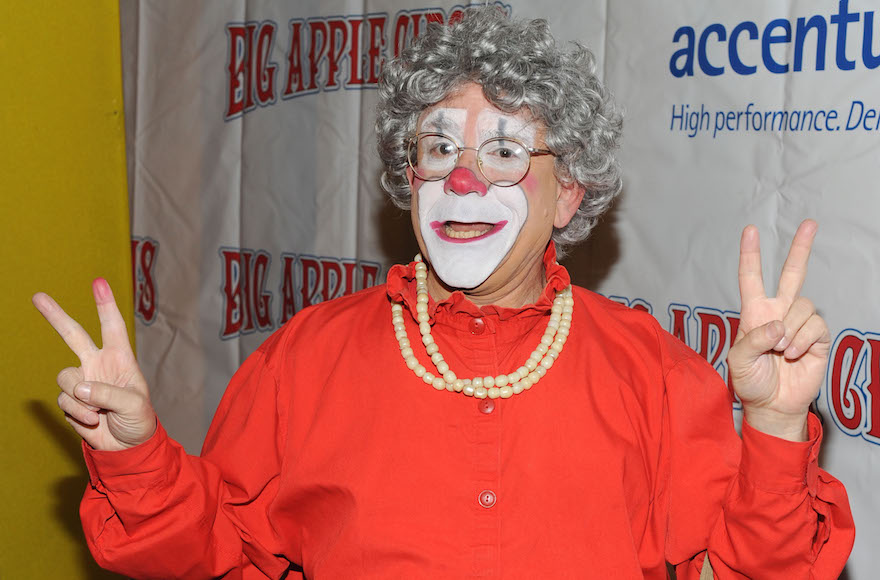 (JTA) — A star of the Big Apple Circus has resigned over revelations that he pressured a female performer to pose for pornographic pictures.

Barry Lubin, 65, who played Grandma the clown in a wig, pearls and an oversized red dress, was put on leave and then resigned on Friday, hours after a former aerialist contacted the circus to accuse him, said the circus’s chairman, Neil Kahanovitz, on Tuesday, the New York Times first reported.

Kahanovitz reportedly had told the accuser, Zoey Dunne, after receiving her letter, “We found the allegations put forth in your correspondence very disturbing.”

It was the second time that Dunne, then known as Zoey Phillips, has contacted the circus with the allegations. She initially contacted the circus about Lubin in 2012. But at that time, he had recently left Big Apple circus and a circus official said there was little it could do, according to the New York Times. He rejoined the circus several months ago, leading Dunne to contact the circus again.

Lubin, through his lawyer, released a statement Tuesday night apologizing for his conduct. “The allegations are true. What I did was wrong, and I take full responsibility for my actions.”

“I know that what happened has had a lasting impact on her life, for which I am sorry,” the statement said. “I not only failed Ms. Phillips, but I also failed in my responsibility as a man, an adult, a father, and as a representative of the Big Apple Circus.”

Lubin told the Jewish Week in New York in 2011 that he patterned the randma character after his own Jewish grandmothers, with whom he spent time as a youth in Atlantic City, New Jersey in the 1950s and ’60s.

The circus just finished its annual three-month run at Lincoln Center in Manhattan, and is set to open in Alpharetta, Ga., on Friday.