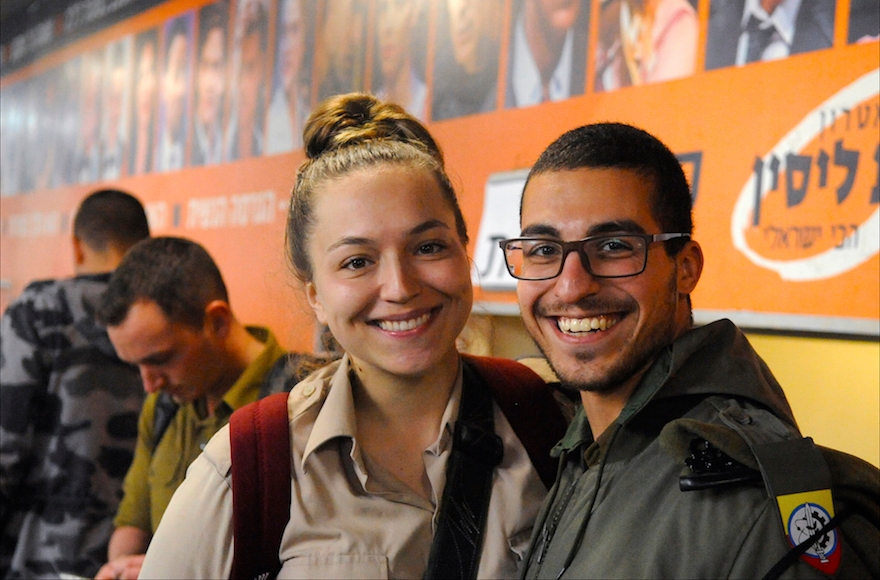 Hannah Carnat-Gronnerud, 23, of Calgary, Alberta and Benji Yefet, 21, an Israeli who grew up in New York, were two of the 1,700 or so Israeli lone soldiers who attended an annual errands day in Tel Aviv called Yom Siddurim, Jan. 25, 2018. (Larry Luxner)
Advertisement

TEL AVIV — Hannah Carnat-Gronnerud stood outside in the Tel Aviv drizzle enjoying her cigarette, an M-16 slung over her shoulder.

A native of Calgary, Canada, Carnat-Gronnerud was in a good mood: She had just wrapped up several weeks’ worth of errands in a matter of hours.

“I got my driver’s license, I switched the address on my ID card and I saw what options there are for studying after I get out of the army,” said Carnat-Gronnerud, who moved to Israel just two years ago and now works on Israel’s Iron Dome missile defense program. “It’s too frustrating to do these things normally.”

Carnat-Gronnerud was among some 1,700 “lone soldiers” – Israeli men and women in uniform whose families live abroad – who converged one day in late January on Beit Hachayal (Soldiers’ House) for an annual “errands day” co-sponsored by Nefesh B’Nefesh and Friends of the Israel Defense Forces.

The idea behind Yom Siddurim is to offer these busy young recruits a one-stop shop where they can take care of everything from applying for municipal tax discounts to obtaining a new biometric Israeli identity card.

“I had to change my ID card to an international one and see about schools for when I’m finished with military service,” said Benji Yefet, 21, who recently moved back to his native Israel after many years in Brooklyn. “I got things done quickly, and it was fun.”

Noya Govrin, director of the Lone Soldier Program at Nefesh B’Nefesh, the nonprofit agency that assists with immigration to Israel from the United States, Canada and Great Britain, said Yom Siddurim dates back to 2014.

“Soldiers get one day every month in order to take care of all their errands,” Govrin said. “From our experience, lone soldiers don’t have the family, the language skills or the time to finish all they have to do. As a result, many of them don’t receive their full benefits, and so we said, ‘Let’s bring all the government offices together under one roof.’” 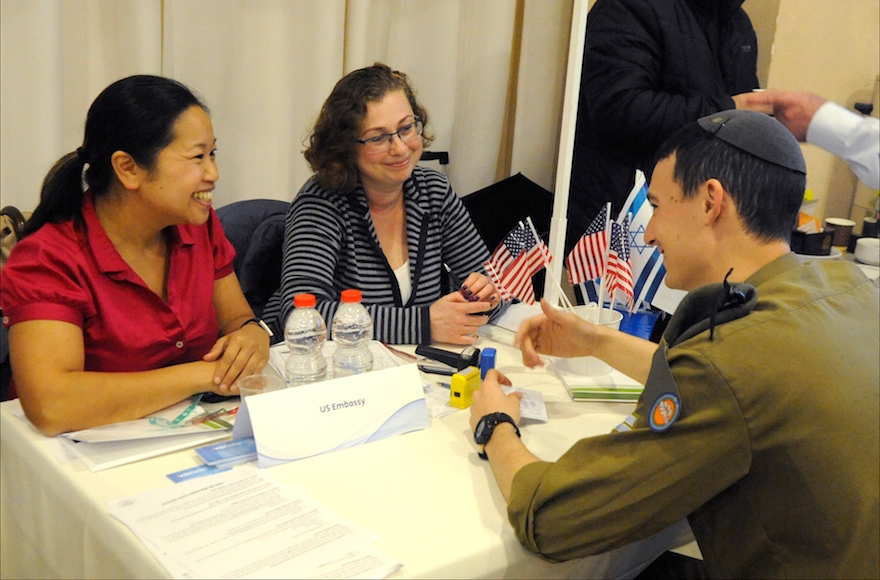 Among the agencies participating in Yom Siddurim this year were the Israeli Ministry of Interior, the Ministry of Aliyah and Integration, the Tax Authority, the Bank of Israel, the Automobile License Authority, the Ministry of Housing and the Jewish Agency for Israel. Representatives of the U.S., Russian and French embassies also were on hand. In a single day, soldiers could take care of their driver’s licenses, figure out their taxes, open a bank account and resolve any number of bureaucratic chores.

“This is our second year participating, and we know there’s a need for our services,” said Ruby Marcelo, a consular officer with the U.S. Embassy in Tel Aviv. “Many Americans have dual nationality and choose to serve in the Israeli army, so we help them with services like passport renewal, notaries and advice about absentee voting. And while we’re not the IRS, we also remind U.S. citizens that everybody still has to file their taxes.”

The full-day event, which drew lone soldiers from some 70 countries, had the air of a trade show. Attendees signed in at a registration desk where they were given name tags and blue tote bags. Among the 50 exhibitors were representatives of the Israeli municipalities of Tel Aviv, Jerusalem, Haifa, Karmiel, Ramat Gan and Herzliya. There were appearances by numerous Israeli politicians and a long table lined with sandwiches, snacks and cold drinks for the soldiers.

But the day was also a crowded, noisy, emotional reunion of army buddies — many of them toting assault rifles or machine guns as they waited patiently in line to finish errands as mundane as paying their electric bills or arranging for housing stipends.

“I’m getting out of the army in two weeks, so now I want to continue my education,” said Sammy Gelman, originally of Spring Valley, New York. The 25-year-old studied chemistry at SUNY Binghamton and has been living in Tel Aviv for a couple of years, but hadn’t had the chance to get an Israeli passport.

“I have a day job in the army, but a lot of combat soldiers are on base 21 days at a time, so they don’t have a lot of free time,” Gelman said. “And when they do, the last thing they want is to sift through government bureaucracy.” 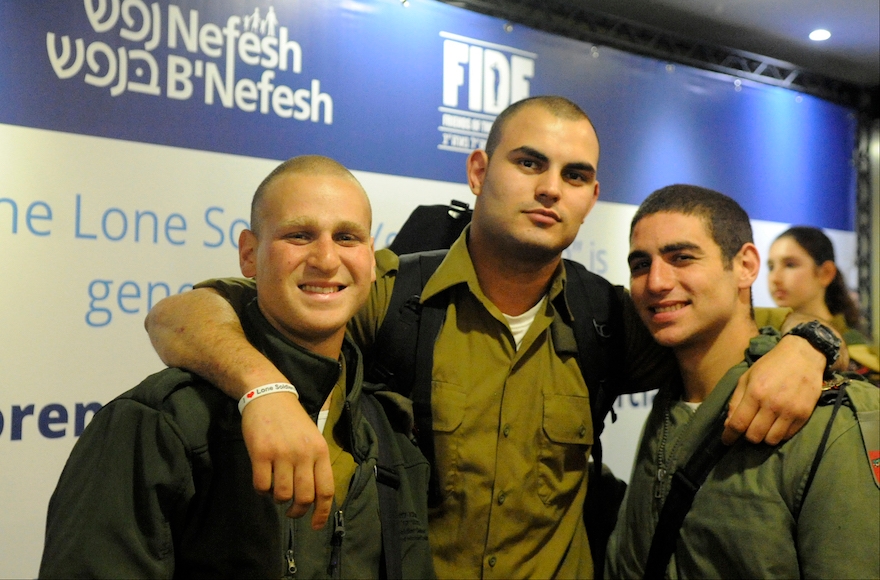 The errands day for lone soldiers is organized by Nefesh B’Nefesh and Friends of the Israel Defense Forces so that Israeli soldiers from abroad can take care of many bureaucratic chores in a single day. (Larry Luxner)

That’s exactly the point, said Nefesh B’Nefesh’s Govrin, estimating that the program has assisted at least 6,000 lone soldiers since its inception four years ago.

“It usually takes eight steps to convert a foreign driver’s license into an Israeli one — from the first application form to the actual test,” Govrin said. “Here it’s just one stop and it takes between two to four hours. This is a dream come true for these lone soldiers.

More than 3,000 lone soldiers from around the world — one-third from the United States and Canada — are currently serving in the Israel Defense Forces. In 2017 alone, 358 lone soldiers made aliyah, or immigrated to Israel, through Nefesh B’Nefesh, which works in conjunction with Israel’s Ministry of Aliyah and Integration, the Jewish Agency, Keren Kayemeth LeIsrael (KKL) and JNF-USA.

“From New York, Moscow, Paris and around the world, these soldiers have love and uncompromising commitment to the Jewish state,” said Israeli Defense Minister Avigdor Liberman, who breezed into Yom Siddurim for a quick morning pep talk. “The thousands of lone soldiers are valuable, each in their own way, all serving on behalf of the State of Israel.”

Listening to Liberman was Ezra Cuelho, who recently made aliyah with his brother from the tiny Montana town of Manhattan, 20 miles northwest of Bozeman. The 21-year-old serves on a military base near the West Bank town of Nablus and lives in Petach Tikvah, a Tel Aviv suburb.

“I’m working on switching my driver’s license and getting an Israeli one,” he said. “I’m on base 11 days at a time, and free three days, so it would be hard to do all this in one day. Parts of it would have to wait another month for the next time.”

His friend Leah Levinson hails from an even more distant place: Sitka, Alaska. Having moved to Israel just 18 months ago, she’s an officer in Oketz, the IDF’s K-9 unit.

“I have to do my driver’s license, need to go to the Ministry of Aliyah, and I also have questions about my apartment rent subsidy,” said Levinson, who said she’s proud of her Alaskan roots but can’t imagine living anywhere else but Israel. “It would have taken me a couple of months to do all this, so Yom Siddurim is definitely one of the best things I can imagine.”

(This article was sponsored by and produced in partnership with Nefesh B’Nefesh, which in cooperation with Israel’s Ministry of Aliyah, The Jewish Agency, KKL and JNF-USA is minimizing the professional, logistical and social obstacles of aliyah, and has brought over 50,000 olim from North America and the United Kingdom in the past 15 years. This article was produced by JTA’s native content team.)