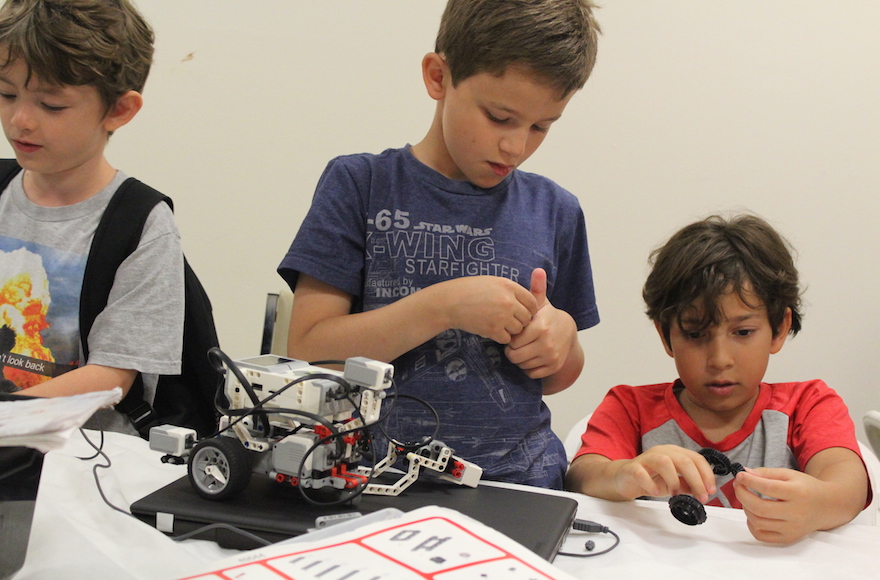 CHICAGO (JTA) — Sam Rosen, a 10-year-old Minecraft player, builds virtual castles at his computer and protects himself from monsters. His mother, Carrie, a high school math teacher, knows the game teaches tech skills and engineering — valuable skills he can build on in school.

So when JCC Chicago announced plans to roll out a tech day camp for the first time this summer, Carrie signed up Sam, understanding that he would learn programming or, as she calls it, “the back end of games.”

The new specialty camp, offering different tech workshops for second- to ninth-graders, is one of the first North American partnerships for Big Idea in Israel. Big Idea, a 10-year-old tech sleepaway camp located on the outskirts of Zichron Yaakov, is where 1,000 elementary to high school-aged children from around the world get a taste of Israel’s culture of innovation every summer. It also runs travel trips and a gap year program.

“This is pretty new and exciting for us,” said Dotan Tamir, the 34-year-old founder and CEO of Big Idea Educational Projects, of the Chicago spinoff.  “It’s part of our mission to help kids in the Jewish world dream of a better world through innovation and creativity – things Israel is known for.”

A second Big Idea day camp is starting this summer at the Bender JCC of Greater Washington in Rockville, Maryland. And this summer will mark the third year for a Big Idea program at the Kaplen JCC on the Palisades in Tenafly, New Jersey. In its first two years in New Jersey, an all-Hebrew track drew day campers from an Israeli-American community already familiar with the Big Idea brand.

This year, an English track will open up the program to more families who don’t necessarily want Hebrew immersion, said Aaron Atlas, the camp director at the Kaplen JCC on the Palisades.

At the end of the two weeks, campers present a final project. All the software links are sent home for campers to keep working on projects.

Guy Goren, 8, is continuing to explore programming since he attended a coding workshop at the Tenafly JCC. He took a break from his computer to tick off all the fun activities during his day at camp, including lunch.

“I did like DJ,” Guy told JTA. “You choose a song and add a few things to it to make your own song.”

Omer Kariv, 19, is typical of the Israeli shlichim, or emissaries, who teach the workshops. He spent one summer in Tenafly after being released from the Israeli army’s Intelligence Corps. A counselor at Big Idea in Israel, Kariv came to New Jersey knowing the latest technologies it offered back home. He is studying mechanical engineering and competes in robotics competitions. He hopes to attend MIT and then the Technion-Israel Institute of Technology.

“I love the way we make the kids interested in high tech,” Kariv said of the Big Idea program. “We show them the high-tech world through their own games. Instead of the hard robotic stuff I learn in college, we add programmable robotics to Lego projects, making it fun and functional.”

The specialized workshops of no more than eight kids are combined with unplugged time for swimming, arts and sports.

“It’s a good mixture with being outside enjoying summer, but it’s technology that my son is really into,” Carrie Rosen said.

“They really bring the Israeli technology spirit to kids,” said Sharon Goren, Guy’s mother, “teaching them how to be more creative and expand their knowledge in a laid back environment.”

Jewish summer camps have been adding specialty camps at a fast clip in recent years, in everything from tech to targeted sports training, the arts, sciences and filmmaking. The Foundation for Jewish Camp, which runs an incubator for specialty camps, said the options are necessary for attracting youth who are bombarded with competing programs and responsibilities.

“To make camp appealing,” the foundation wrote in a report last year, specialty camps “need to continue marketing their newness, to new campers coming for their first experience and returning campers who want to do something different from last summer.”

Big Idea’s satellite camps in North America provide campers with an introduction and feeder track to its programs in Israel. Ariel Oren, 17, of Toronto, attended the camp in Israel for two summers — one as a camper for two weeks, the other as a counselor in training for four weeks. He remembers surfing in the morning, learning 3-D modeling and taking a course in entrepreneurship.

He and his team members created a survey and did market research for an app that connects young adults beset by mental illness with a therapist. Business moguls judged the entry and gave feedback on the product and presentation. The session included a visit to a university where the campers were lectured on how to launch a startup.

Oren most remembers the new and lasting friends he made at Big Idea.

“What’s really unique was the fact that this is really an international camp and I really connected with a lot of people who are now friends,” he said.

The Chicago JCC is committed “to bringing Israel to life for kids who have probably never been there,” said Jamie Lake, its day camp marketing manager. “It’s interwoven within the fabric of the camp, helping kids connect to modern Israel, giving them a sense of pride in Israel’s success in technology.”