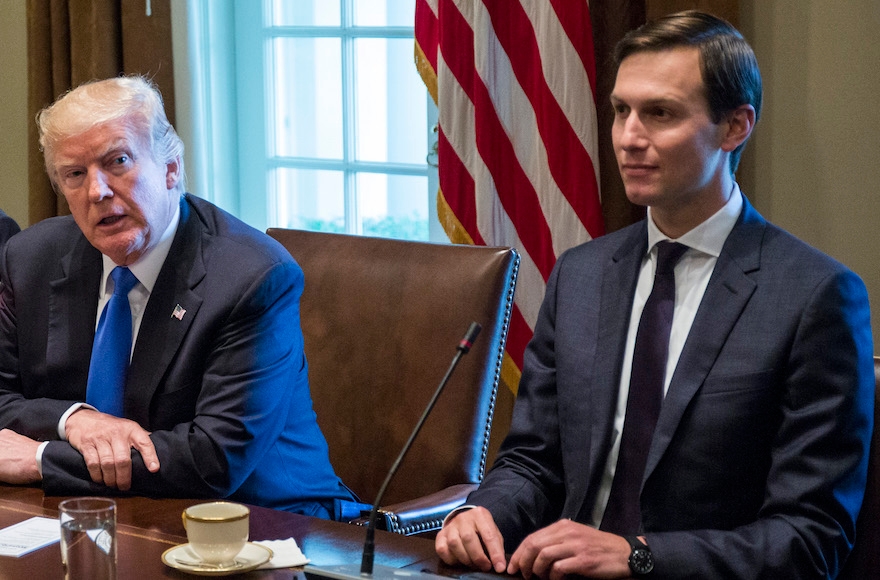 (JTA) — Donald Trump is just the man to get an Israeli-Palestinian peace deal done.

The Israeli prime minister was gushing last week about Trump’s negotiating team, which is led by his son-in-law, Jared Kushner.

“The thing the people don’t realize is that these people have made their mark in the markets, in real estate,” Netanyahu said in an interview in Davos, Switzerland, with CNN’s Fareed Zakariah. “Now this is not only a real estate deal, it’s fundamentally not a real estate deal but a problem recognizing Israel’s existence, the problem of not recognizing a Jewish state in any boundary. But it also has its real estate elements and they are, I have to say, very creative.”

Odds are you’re snickering — because you think Trump’s recent decision to move the embassy to Jerusalem shows the president is only interested in doing right by Israel, not getting the Israeli-Palestinian negotiations back on track. The only question is if you think that’s a good thing or a bad thing.

Just one problem: Donald Trump and Team Kushner sure sound like they want to get a deal done.

At his joint news conference with Netanyahu in Davos, Trump made clear that the embassy decision was not a freebie but an advance payment for future Israeli concessions.

“You win one point,” Trump said to Netanyahu. “And you’ll give up some points later on in the negotiation if it ever takes place. I don’t know that it ever will take place.”

Trump coupled that comment with a promise to slash U.S. aid to the Palestinians unless they come back to the negotiating table.

The president isn’t looking to kill the peace process; he’s looking to get the negotiations started. And that shouldn’t be surprising.

When he showed up for the Republican Jewish Coalition’s candidate forum in December 2015, Trump could have hit a grand slam by sticking to bash-Obama talking points, declaring Jerusalem the eternal, undivided capital of Israel and telling the Palestinians to take a hike. But he demurred when asked about Jerusalem’s status and stressed the need for the United States to be seen as evenhanded. And he talked about his desire to get a deal done.

“The hardest deal in history to put together,” he said. “If I can do that, it would make me so happy.”

Since then, Trump has gotten in step with key constituencies (like Jewish Republican donors and evangelical Christian voters) by dropping the neutral talk in favor of unabashedly pro-Israel talking points. But he hasn’t backed off the push for Israeli-Palestinian negotiations and a final deal.

In fact, he signaled just how important it is to him by putting Kushner in charge and adding  Trump Organization lawyer Jason Greenblatt to the team. Sources on all sides have praised Greenblatt for his tireless efforts and willingness to listen.

Just days before Trump’s Jerusalem announcement in December, Kushner — who almost never speaks publicly — appeared at the Brookings Institution’s Saban Forum in Washington, D.C. His message: “If we’re going to try and create more stability in the region as a whole, you have to solve [the Israeli-Palestinian] issue.”

As Kushner acknowledged, none of this means a deal is close, or even possible.

These days, Mahmoud Abbas would throw shade on the idea that Trump is serious about getting a deal done. The Palestinian leader says he’s had it with U.S.-led talks, claiming Trump’s embassy decision proves Washington is incapable of serving as an honest broker.

But blaming Trump’s Jerusalem move for the lack of Israeli-Palestinian talks is like saying today’s rainstorm is responsible for the ocean.

Abbas has been signaling for years that he thinks his best play is to sidestep U.S.-sponsored bilateral talks with Israel in favor of some sort of international forum. He halted direct, public negotiations with Israel since 2014, back when Barack Obama was in the White House and Trump was still on “The Apprentice.”

Whatever you think of the embassy decision, it doesn’t mean Trump is trying to fire the Palestinians. You could just as easily point to signs that he’s still itching to host a Mideast version of “Let’s Make a Deal.”

(Ami Eden is the CEO and executive editor of 70 Faces Media, the parent company of JTA.)