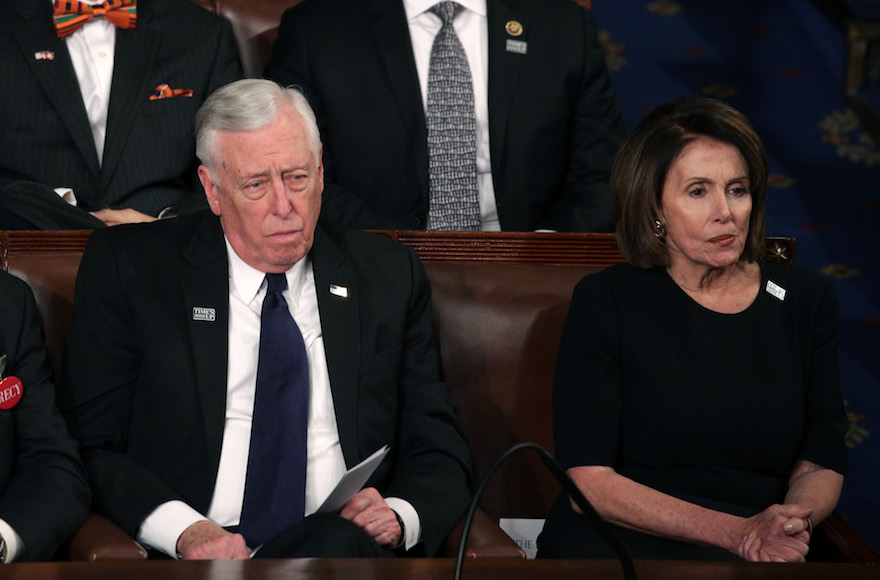 Democratic Reps. Steny Hoyer, left, and Nancy Pelosi at the State of the Union address in the chamber of the U.S. House of Representatives, Jan. 30, 2018. (Alex Wong/Getty Images)
Advertisement

(JTA) — President Donald Trump’s recognition of Jerusalem as the capital of Israel made it into his State of the Union speech.

“Last month, I also took an action endorsed unanimously by the Senate just months before: I recognized Jerusalem as the capital of Israel,” he said to applause, mostly from Republicans.

Trump segued from that to a favored theme of his presidency — countries that contradict U.S. policies may no longer get U.S. funding, he said, noting a subsequent U.N. vote condemning his decision. Still, it was a significant moment. State of the Union speechwriters cull plenty in the process of shaping what a president wants to tout from the previous year as representing his vision. Jerusalem got in.

Democrats, with a couple of notable exceptions, did not applaud. (The exceptions included Jewish pro-Israel stalwarts Sen. Charles Schumer of New York, the minority leader, and Rep. Debbie Wasserman Schultz of Florida.)

By and large, Democrats didn't even applaud last night at the mention of recognizing Jerusalem as the capital of Israel. @USJewishDems, #WhatsThePlan to stop the erosion of support for Israel in your party?#SOTU https://t.co/6gjRajylRA

And here’s Morton Klein, the president of the Zionist Organization of America:

It was painful to see Democrats sit on their hands when President Trump stated he recognized Jerusalem as Israel’s Capitol and that we should give no foreign aid to our enemies(like the Palestinian Arab Regime who receives $450 million a year of US Taxpayer money.

I asked a bunch of Jewish Democratic lawmakers why no applause. As Trump noted in his speech, his recognition came six months after the Senate in a 90-0 vote reaffirmed a 1995 law that recognizes Jerusalem as Israel’s capital.

Only one got back to me — both parties are at retreats this week and many members are hard to contact. Rep. Nita Lowey, D-N.Y., a pro-Israel stalwart and the top Democrat on the U.S. House of Representatives Appropriations Committee, sent me the following:

“The congresswoman believes that Jerusalem is the eternal capital of the State of Israel and the Jewish people. She also believes that we must remain focused on the goal of two states for two peoples – the Jewish state of Israel and a Palestinian state – living side-by-side in peace, security, and mutual recognition — something she would have liked to see the president discuss last night.”

In other words, recognizing Jerusalem as Israel’s capital is premature absent a deal. The Senate resolution Trump cited seems to make the same point: It “reaffirms that it is the longstanding, bipartisan policy of the United States Government that the permanent status of Jerusalem remains a matter to be decided between the parties through final status negotiations towards a two-state solution.”

I followed up with Ron Klein, a former Democratic congressman who now heads the Jewish Democratic Council of America. He made two points, the first echoing Lowey’s issue with the United States remaining focused on the peace process.

“There’s a question about timing, about being the facilitator of the peace process. Did he do something that jeopardized that role?” Klein asked. He noted that the Palestinians have walked away from Trump administration attempts to restart the peace process since the Jerusalem announcement.

Klein said there was the bigger picture: a deeply polarized Washington, where Democrats blame Trump for sowing division with unfettered attacks on their party, the media and, at times, on minorities.

(It should be noted that Democrats sat on their hands through a range of Trump announcements on bread-and-butter issues, including low unemployment and lower prescription drug prices.)

Particularly galling, Klein said, was Trump’s retreat last month from a deal that Democratic leaders believed they had secured to protect illegal immigrants who arrived here as children.

“There is a grave lack of trust and dislike between the president and Democrats at this moment,” Klein said. “You saw that on display” at the State of the Union.