Twice in four years, Joe Arpaio said he did not know he was speaking to the same anti-Semitic newspaper 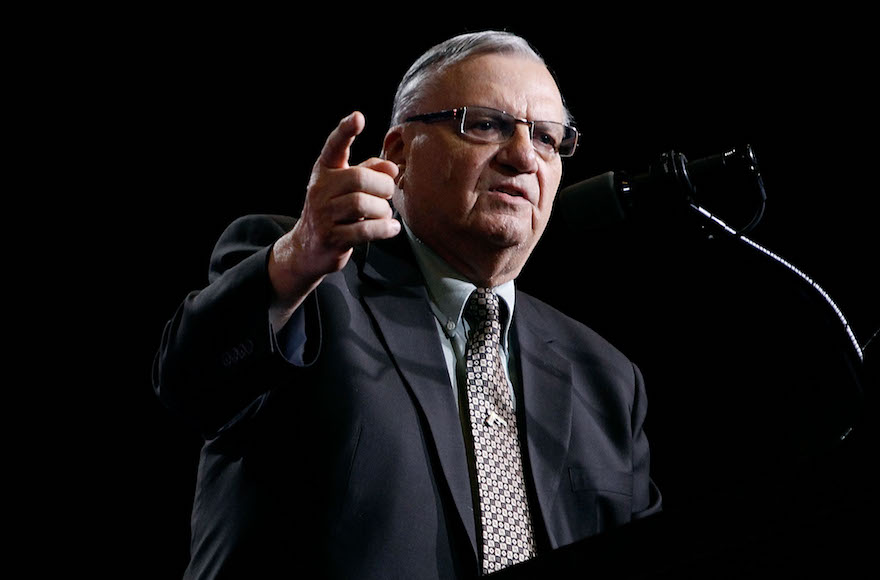 WASHINGTON (JTA) — Senate hopeful Joe Arpaio, the former Arizona sheriff pardoned by President Trump after his conviction in a racial-profiling case, said he did not realize he had given an interview to a publication that peddles anti-Semitism and Holocaust denial.

Arpaio’s statement posted on Twitter on Thursday was a virtual repeat of the statement he issued to the press in 2014, after speaking with the same publication.

The Washington Post uncovered five instances when Arpaio spoke to the publication, the American Free Press.

“It was brought to my attention I gave interview to publication that supports antisemitism; I was unaware and don’t support that view point,” Arpaio said Thursday.

It was brought to my attention I gave interview to publication that supports antisemitism; I was unaware and don't support that view point

“The sheriff does hundreds of interviews with different people and doesn’t do background checks on them before he does them,” a spokesman for Arpaio said in 2014 after Arpaio gave an interview to the American Free Press.

Arpaio, 85, is one of three viable candidates so far vying for the Republican nomination to replace Sen. Jeff Flake, R-Ariz., who is retiring. The likeliest Democratic candidate is Rep. Kyrsten Sinema.

Arpaio was sheriff of Maricopa County in Arizona for 24 years, losing a re-election bid in November 2016. He was found guilty in a Justice Department investigation for racially profiling Latinos and convicted on July 31 of criminal contempt for disobeying a federal judge’s order on detaining individuals suspected of being in the U.S. illegally. Trump pardoned Arpaio in August before he was sentenced. Arpaio had been a prominent backer of Trump in the 2016 election.

An array of organizations slammed Trump for the pardon, including a number of Jewish groups.

Rep. Lou Barletta, R. Pa., last week drew fire when it was revealed that he had given an interview to the American Free Press in 2006, when he was earning national headlines for cracking down on illegal immigration in the town where he was mayor.

Articles in the American Free Press include “Jewish Academic Details Role of Israeli Mossad in 9/11,” “Someone Tell Trump: It was Jews, Not Arabs, Dancing on 9-11,” “International Jewry Defeats Canadian Publisher in Landmark Case” and “Pacifist Historian Denied U.S. Entry,” the latter in praise of Ernst Zuendel, the late German Holocaust denier.