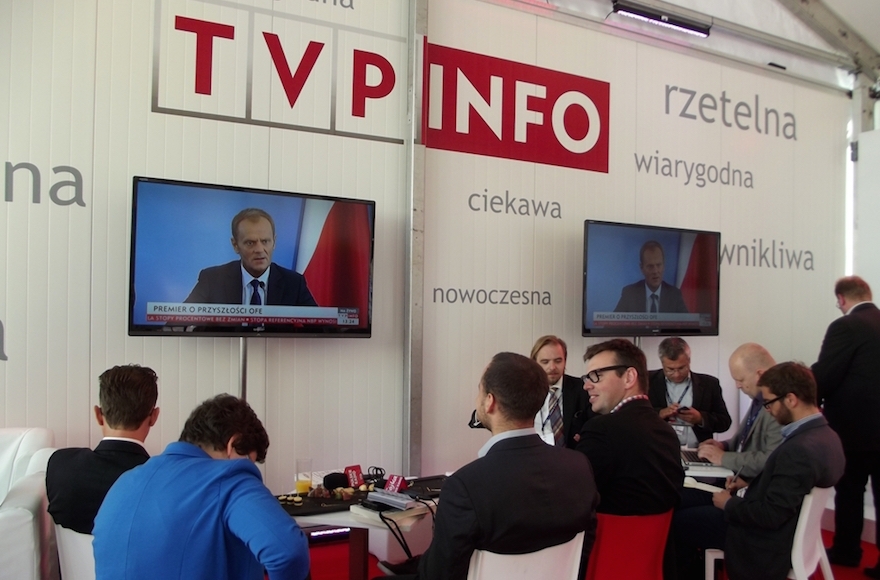 TVP, the state-owned television station in Poland, apologized to an Israeli ambassador for a tweet accusing Israel of ulterior motives in objecting to a new law regulating how Poles may discuss the Holocaust. (Flickr Commons/Piotr Drabik)
Advertisement

WARSAW, Poland (JTA) — Debate over a Polish law that proposes to outlaw rhetoric blaming Poland for Nazi crimes has prompted a wave of anti-Semitic comments in the Polish media.

RMF, one of the largest Polish commercial radio stations, suspended a journalist who wrote about the “war with the Jews.” Poland’s state-owned television station apologized to the Israeli ambassador for a tweet alleging that the Jewish opposition to the law was part of an attempt to seize Polish property.

Also, a former priest began selling T-shirts denying Polish responsibility for a pogrom against Jews by their non-Jewish neighbors during the Nazi occupation.

All three events came after the Polish Senate approved an amendment to the National Remembrance Act levying a penalty of up to three years in prison for those who blame the Polish nation for the crimes of Germany committed during World War II. It also outlawed the phrase “Polish death camps.”The bill must still be signed by the president.

Historians of the era, Jewish groups, the U.S. State Department and the Israeli government are all critical of the law, which they said could inhibit academic freedom and distort the historical record of World War II.

“Poles, we are at war! We are at war with the Jews! Not for the first time in our history,” wrote Bogdan Zalewski, an RMF journalist, on his Facebook page on Thursday. “We can find ourselves in a state of absolute isolation that completely exhausts us down to annihilation. In my opinion, it is necessary for Poles to be aware and to work on the development of the national spirit.”

His statement appeared just after the Senate approved the amendment.

He went on to blame Jews for the “iron fist” of Soviet rule in Eastern Europe, and accused the Jews of a reign of terror against the British and Arabs in prestate Israel.

“The U.S. authorities were full of Jews in many key positions. Many of these Jews have been actively engaged in espionage in favor of the Soviets,” he said.

“I can only condemn these words,” said Bogdan Frymorgen, a producer and journalist. “I can only show contempt for a man who in the 21st century, with full awareness of the horrors of the previous century, goes to ‘war with the Jews,’ regardless of being a public figure. Virtually, I can spit in his face.”

The radio station suspended Zalewski, who apologized and deleted his post.

On Feb. 2, the Israeli Embassy in Warsaw condemned a tweet from the state-owned TVP Info Channel claiming that Israel’s reaction to the new law was part of an attempt to reclaim properties in Poland.

“It’s hard to find a brighter example of an anti-Semitic fake news,” the embassy statement read.

The public television station apologized to Israeli Ambassador Anna Azari, saying that the tweet “was a mistake” and relied on an unverified source of  information.

“Disciplinary consequences will be drawn against this person,” TVP said in a statement.

Last week, a TVP host and a guest mocked critics of the legislation, suggesting that Jews were in part responsible for their own slaughter during the Holocaust and joking that the death camps should be referred to as “Jewish death camps.” The host apologized, but the guest, Rafał Ziemkiewicz, said he didn’t regret using the term “Jewish death camps.”

Ziemkiewicz, a writer and journalist, also demanded the resumption of the exhumation of victims’ remains in Jedwabne, the site of the 1941 massacre of hundreds of Jews by their non-Jewish Polish neighbors. The controversial plan was proposed in 2014 in an effort to provide conclusive forensic evidence about the massacre.

“Since we already have a war, I appeal to the Institute of National Remembrance to take this opportunity to finally make exhumation in Jedwabne, blocked effectively over 10 years ago by the pressure of Jewish organizations,” he wrote on Facebook.

Ziemkiewicz said the exhumation could provide evidence that the crime “was committed by the Germans.”

The head of the Polish Press Agency, Wojciech Surmacz, also blamed Jews for the deaths of other Jews during the Holocaust, sharing on Twitter a photo of Jewish ghetto police. He said the police were responsible for the deaths of “millions of Jews” in Poland.

The Nazis often forced Jews to police the ghettos, usually under threat of death.

Surmacz is the author of a 2013 Forbes article accusing Polish Jewish leaders of personally benefiting from the restitution of prewar property. Forbes later apologized.

Also last week, a former priest, Jacek Miedlar, began producing T-shirts and sweatshirts with the inscription “I am not sorry for Jedwabne.”

Counterprotesters chanted the slogan during an anti-racism march in Bialystock in 2011. Two years later a court said the chant was incitement to hatred and sentenced those counterprotesters to prison terms of six to 10 months, which were suspended. Their lawyer said that “research shows that nearly 50 percent Poles do not want to apologize for Jedwabne.”

Miedlar is associated with Polish nationalists and last year was indicted in the western Poland city of Wroclaw for “public incitement to hatred based on religious and national differences.” In 2016 he gave a speech in which he called for hatred against Jews and Ukrainians.

Michał Szczerba, a member of the parliament from the opposition Platforma Obywatelska party, said he would report Miedlar to the prosecutor’s office for selling the shirts.

“In my worst nightmares I never expected to hear jokes about Auschwitz, Jews and gas chambers on state-owned television,” Piotr Kadlcik, a prominent Warsaw Jewish leader, told JTA. “I sincerely hope that the Polish president will veto this law and we will be able to start the process of putting back together Polish-Jewish relations.”