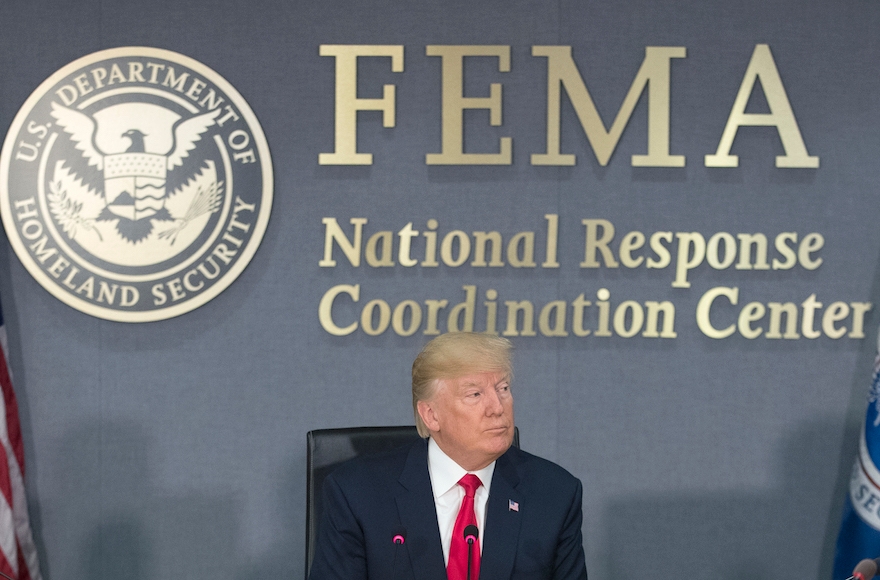 On Friday morning, Trump signed a two-year budget measure that included the provisions extending assistance. The government had shut down overnight, as lawmakers were unable to agree on the larger budget bill.

Last month, FEMA adopted a policy to allocate disaster aid to houses of worship, reversing years of policy that excluded such aid. The law makes that policy permanent, as a future president could have reversed the FEMA policy.

Under previous rules, relief funds could not go to churches, synagogues and other houses of worship due to concerns about separation of church and state.

Orthodox Jewish groups, which had been lobbying for the bipartisan bill, hailed its passage.

“This is a very welcome change to the federal government’s unfair treatment of houses of worship, which made it so much harder for them to rebuild after the devastation wrought by hurricanes such as Harvey and Irma, and years ago by Superstorm Sandy,” the Orthodox Union’s executive director for public policy, Nathan Diament, said in a statement.

“With this change, they will no longer be unfairly treated as ‘second-class citizens’ in regard to disaster relief aid,” Rabbi Abba Cohen, the group’s vice president for federal affairs and Washington director, said in a statement.

Advancing the bill in the House were Reps. Peter King and Grace Meng, a Republican and Democrat, respectively, both from New York, and Chris Smith, R-N.J. The regions they represent were hard hit by Sandy in 2012.

Leading the Senate’s legislation were Sens. Roy Blunt and Claire McCaskill, a Republican and Democrat, respectively, from Missouri, along with James Lankford, R-Okla., and Ted Cruz, R-Texas.