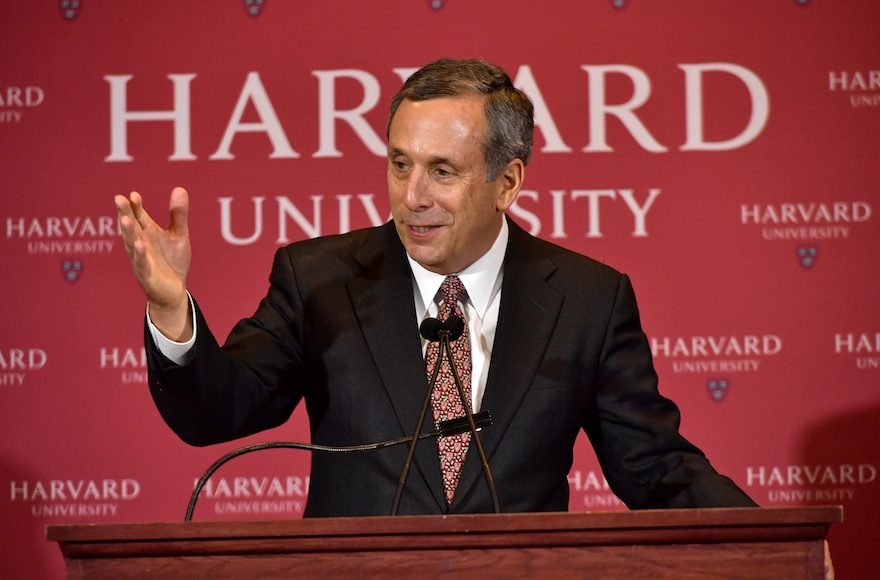 (JTA) — Lawrence Bacow, the former president of Tufts University and the son of a mother who survived Auschwitz, has been tapped as the president of Harvard University.

The university made the announcement in a statement issued Sunday, The Boston Globe reported.

Bacow, a lawyer and economist, will replace Drew Gilpin Faust, who is retiring in June. Bacow had served on the search committee that hired Faust, the first woman president of Harvard, according to the Globe. He becomes the third Jewish president of the last four to hold the post at the Ivy League school.

Bacow, 66, hung a mezuzah on the front of the president’s residence at Tufts, an eminent Boston university that he served from 2001 to 2011, and participated in events at the campus Hillel. Along with his mother surviving the concentration camp, his father, a native of Minsk, Belarus, was brought to the United States as a child “to escape the pogroms of Eastern Europe,” he said in a video interview with Harvard, the Globe reported.

“I would not be standing here today, literally, if this country had turned its back on my parents,” Bacow said Sunday during a news conference.

An expert in environmental policy, Bacow is originally from Pontiac, Michigan. He received his undergraduate degree from MIT and has a law degree and doctorate from Harvard. Prior to leading Tufts, he was chancellor of MIT, where he also spent 24 years on the faculty.

At Tufts he oversaw a fundraising campaign that raised $1.2 billion and is credited with strengthening the university’s ties to the surrounding community, according to the newspaper.

At Harvard, he joins Neil Rudenstine and Lawrence Summers as Jewish presidents of the Ivy League school. Rudenstine served from 1991 to 2001 and Summers from 2001 to 2006.