For Jews in the Netherlands, Catholic Carnival feels like ‘hardcore Purim’ TILBURG, Netherlands (JTA) — Although he lives in a city with only a few dozen Jews, the Israel-born photographer Idan Hemo and his family enjoy each spring what he calls “hardcore Purim” street festivities.

“Everyone dresses up, including and especially the adults, in elaborate costumes and there’s just constant drinking and an incredible party atmosphere on the street,” Hemo said of the annual street party that takes place around the time of Purim in his city of Breda and other places in Holland’s south.

Actually, the costume parties that are held in parts of Europe in early spring are organized independently of the Jewish holiday of frivolity, dress-up and excessive alcohol consumption with which they often coincide.

They are instead part of Carnaval, or Carnival, a Catholic tradition with pagan roots that grew out of the need to consume winter larders. (The name is derived from the Latin word for meat.) It features a temporary suspension of the prohibition on consuming meat during Lent, a monthlong period of repentance, and a license for tipsy and ribald behavior.

The similarities between Purim and Carnival have long been apparent, and are probably the result of a universal desire to celebrate winter’s end and of centuries of cultural borrowing.

But for Israelis in the southern Netherlands, where Catholicism is dominant, it’s a chance to continue the beloved tradition of Adloyada, or Purim parade. The name is a mashup of an Aramaic injunction in the Talmud that Jews should drink enough on Purim so that they should “no longer know” the difference between the holiday’s hero and its villain.

Of course, there is drinking, and there is drinking. The amount of alcohol consumed by Purim revelers is negligible compared to Carnival, according to Kristina Tali Salman, an Israeli mother of one from Breda, where Carnival is a weeklong affair.

Even for a seasoned Adloyada participant from Tel Aviv — the city where the Purim procession began in 1912 — Breda’s Carnival was for her  a “culture shock,” she said.

“The amounts of alcohol the Dutch consume is insane, simply insane,” she said. “You see men lugging around crates of beer as they stumble around town in a drunken stupor that they begin in morning and continue, often without interruption, for 24 hours or longer.” 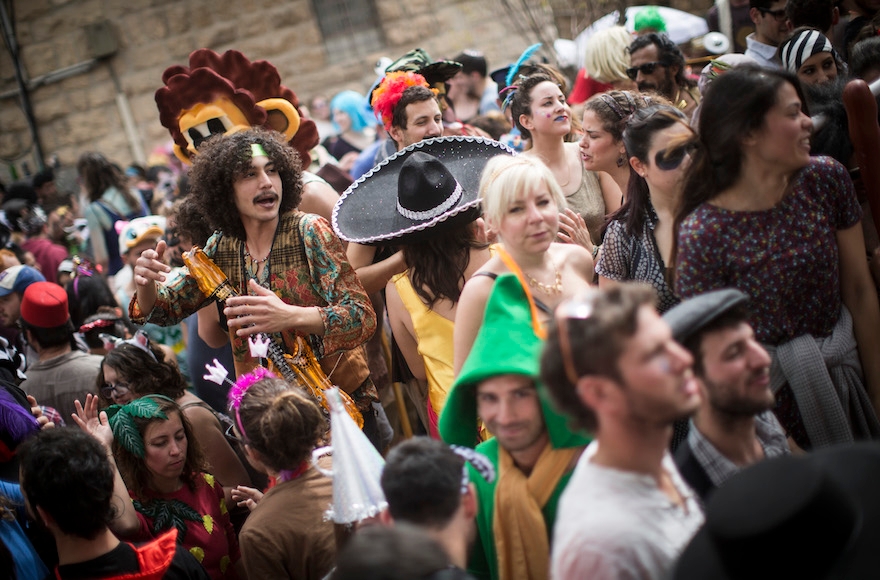 Some parents take children bar hopping on Carnival, which is a bank holiday in some parts of Holland, Salman said. The children do not drink, playing around the tables “as their parents get hammered,” she said.

“The bars are packed. When you enter one, you are overwhelmed by a unique stench of evaporated beer and the sweat-soaked costumes made from cheap materials like plastic and rubber,” Salman said. “Then you immediately get showered with beer from people bumping into you. But you don’t mind anymore after a pint or two.”

On the street, some neighborhoods set up Carnival groups that prepare matching costumes for a local procession, like Brazil’s famous Carnaval celebrations. In addition to the grassroots processions, there are also citywide ones organized by the municipality.

These events are “similar to the Adolyada,” Israel’s Purim procession, “but also much more individualistic,” Salman said. “The Adolyada will have more structure because it’s made up of schools or groups where everyone is wearing a matching outfit.”

During Tel Aviv’s annual Adloyada, tens of thousands of spectators line the streets for a procession of floats and costumed children and adults. Purim is celebrated this year on Feb. 28.

But Carnival is more lively and chaotic, with adult individuals joining in with imaginative and ambitious get-ups.

At this year’s Breda Carnival, which ends this week, Salman admired three women dressed as trees.

“They were each basically implanted into a large tree suit,” she said. “It was cumbersome, huge and totally impractical. and I loved how seriously they took Carnaval.”

Despite the similarities with Purim, it’s no replacement for Purim, agreed Hemo, Salman and Riki Nudler-Rahamim, an Israel-born mother of four from the southern city of Maastricht. 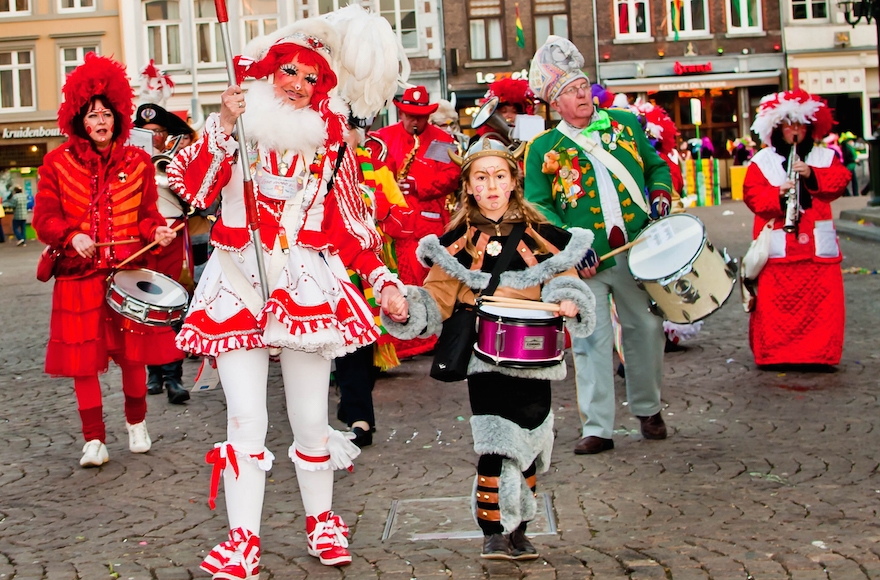 “No, it’s not instead of Purim,” said Nudler-Rahamim, a professional party organizer who has four children and moved to the Netherlands 13 years ago. “It’s a lovely Purim addition, not a substitute.”

Salman, 39, said she and her 5-year-old son have different costumes for Purim and Carnival.

“We don’t mix meat and dairy,” she joked, referencing one of the kosher laws.

Today’s Carnival has little to do with anything Jewish, although in the past Jews occupied a central and often demeaning role in two of the Catholic world’s main Carnival celebrations: the masked processions in Venice and the Carnival in Rome.

In Rome, the Catholic Church under Pope Paul II in 1466 revived a custom in which Jews were forced to race naked through the streets.

“Before they were made to run, the Jews were richly fed, so as to make the race more difficult for them and at the same time more amusing for spectators,” one witness to that event wrote, according to David Kertzer’s 2001 book “The Popes Against the Jews: The Vatican’s Role in the Rise of Modern Anti-Semitism.” The Jews ran “amid Rome’s taunting shrieks and peals of laughter, while the Holy Father stood upon a richly ornamented balcony and laughed heartily,” the account read.

Throughout the 18th and 19th centuries, rabbis of the ghetto in Rome were forced to march through the city streets wearing foolish guise, jeered upon and pelted by the crowd. Replying to an 1836 petition by the Jewish community to put an end to the custom, Pope Gregory XVI replied, according to Kertzer’s book: “It is not opportune to make any innovation.” The custom was abolished in the 19th century, but Jews were still made to pay for Carnival through a special tax.

In the larger Venice Carnival, participants wore “Jew” masks, complete with hooked noses and grotesque expressions, according to James Johnson, author of the 2011 book “Venice Incognito: Masks in the Serene Republic.”

That custom may be the reason Jews wear costumes today during Purim, according to Ethan Dor-Shav, director of education at the Israel Innovation Fund, who has researched the Venice mask carnival.

Wearing masks and costumes on Purim dates back no earlier than the Middle Ages, Dor-Shav wrote in a Feb. 3 column for Ynet. “The Jews of Venice were inspired by the mask Carnival and incorporated it into their coinciding holiday. Synagogue-goers dressed up as characters from the Book of Esther.”

David Cassuto, a renowned Florence-born Israeli architect and expert on Italian Jewry, said he is familiar with the theory that dressing up on Purim began in Venice.

A different explanation suggests that Sephardic Jews wishing to assimilate began organizing costume galas in Italy with non-Jewish guests when the city’s rabbis forbade such interaction.

“But the masks prevented you from being identified, meaning galas could be held with impunity,” Cassuto told JTA on Friday.

To Dor-Shav, the Purim costumes represent a strong emotional need on the part of the Jews.

The story of Purim is the salvation of the Jewish people in Persia from the hands of an anti-Semitic and genocidal aide, Haman, to the king, Ahaseurus. Dor-Shav wrote that masks could be “put on by Venice’s Jews as a kind of payback for the humiliation of Carnival, presenting in a subversive manner the non-Jews’ defeat and demise.”