Why Jewish leaders are fighting about Qatar 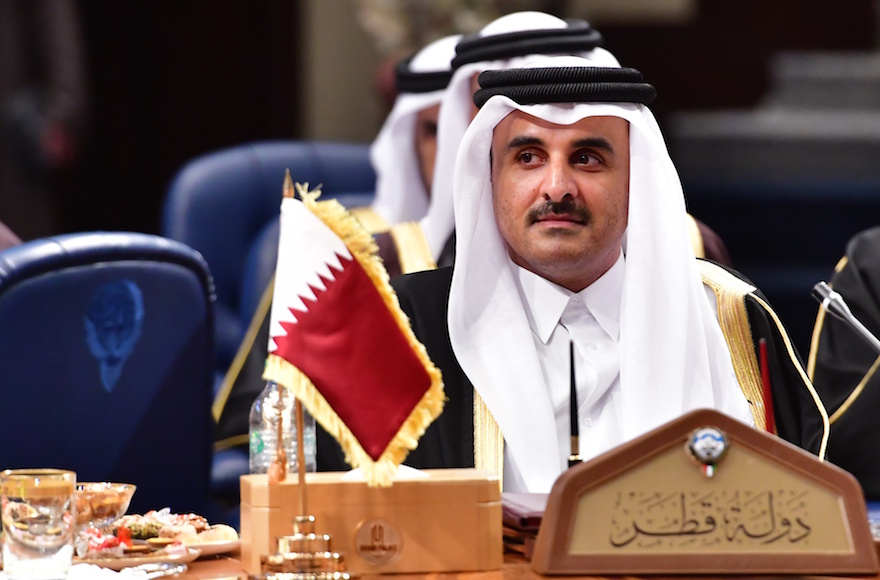 WASHINGTON (JTA) — There’s a battle going on among pro-Israel leaders, and it’s over Qatar. It’s like watching ice hockey players clear the bench for a brawl, only the antagonists are all on the same team.

The folks lining up to praise or bury the emirate are best known for sharing the same stages, and often the same opinions about their overarching concern: Israel. But here they are, old friends at odds over another small Middle Eastern state surrounded by hostiles.

What’s going on? Here’s a pocket history — and a scorecard.

In June, Saudi Arabia spearheaded a five-nation blockade of Qatar seeking to punish the rival emirate for its support of Islamist groups and its close relations with Iran, the Saudis’ main regional rival. Since then, both countries have been seeking favor with the United States, with Qatar aiming some of its charm offensive at Jewish and pro-Israel leaders.

In recent weeks, some high-profile Jewish leaders — including Harvard attorney Alan Dershowitz, Morton Klein of the Zionist Organization of America and Malcolm Hoenlein of the Conference of Presidents of Major American Jewish Organizations — have paid visits to Qatar at the invitation of its rulers. Other Jewish and Israeli leaders have criticized the visits. On Feb. 9, Itai Bar Dov, a spokesman for the Israeli Embassy in Washington, D.C., told the The New York Times, “We do not approve of these visits by the Jewish organizations to Qatar.”

Why Qatar? Why now?

Saudi Arabia has long seen itself as the pre-eminent Sunni Arab state in the Persian Gulf. Its royal family is the guardian of two of the holiest cities in Islam, Mecca and Medina. Most of its neighbors have been content to defer to its leadership.

Most, but not Qatar. The Al-Thani family, which has controlled Qatar since at least the mid-19th century, has long chafed at taking instructions from Qatar’s massive neighbor. Their defiance of the Saudis has led to contradictions: Qatar was among the first Gulf Arab nations to openly welcome Israeli travelers, but also backs Islamist groups like the Muslim Brotherhood (although, it insists, not ISIS or al-Qaida). Home to the largest U.S. military base in the region, Qatar also enjoys friendly relations with Iran. Qatar, like its neighbors, closely controls expression in the country; it also bankrolls the freewheeling TV network Al Jazeera.

When Mohammed bin Salman, the tyro son of the current Saudi Arabian king, was named crown prince in June, he quickly flexed his muscles at home and in the neighborhood. Bin Salman has marked territory in recent months in Lebanon and Yemen, and led the blockade of Qatar. 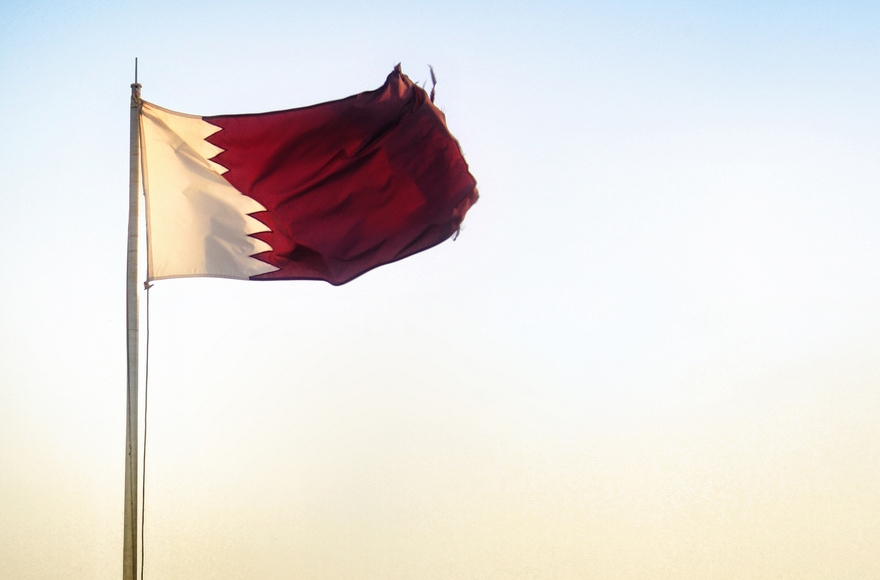 Qatar has been blockaded by its neighboring Arab states since June. (Flickr Commons)

Bin Salman’s manspreading also has much to do with the election of another alpha male: Donald Trump. The president has signaled he appreciates bold moves among U.S. allies. (Trump’s son-in-law, Jared Kushner, is super friendly with bin Salman and is perceived in the Middle East as having given the green light for much of the prince’s recent posturing.)

Not that the Trump administration has been consistent, exactly. Trump tweeted support of the blockade in June, even as his secretary of state, Rex Tillerson, worked mightily to undo it and last week called Qatar “a strong partner and longtime friend.”

Since then, both sides, the Qataris on one and the Saudis and smaller Gulf states on the other, have been working hard to gain Washington’s favor. Bizarrely, those who have yet to formally recognize Israel have focused most intently on the pro-Israel lobby.

Dershowitz, the constitutional lawyer and defender of Israel, said his visit to Qatar last month disabused him of much he had heard about the emirate and also made him warier of the Saudis. For one thing, Qatar was allowing an Israeli to compete in a tennis tournament, while the Saudis were keeping out an Israeli chess competitor. Saudi pressure to shut down Al Jazeera especially offended Dershowitz, a free speech advocate.

Qatar denied other offenses, including backing for Israel’s deadly enemy Hamas. Dershowitz was skeptical but wanted to know more before endorsing steps as drastic as a blockade.

“Qatar is quickly becoming the Israel of the Gulf States, surrounded by enemies, subject to boycotts and unrealistic demands, and struggling for its survival,” he wrote in The Hill on Jan. 12.

That was too much for Rabbi Shmuley Boteach, the celebrity rabbi who advocates for Israel and against anti-Semitism as the head of the World Values Network. In a Jerusalem Post column, he wrote that likening Qatar to Israel is “an absolutely shocking statement that must be totally and completely rebutted.” He called Dershowitz, his one-time debate partner (they teamed up at Harvard in 2002 against two pro-Palestinian advocates) a “Jewish junketeer” and a “mouthpiece.”

Dershowitz wrote to the Post saying that Boteach’s column “mischaracterizes what I actually said and then rails against the straw man he has deliberately substituted for the truth of what I said.” On Twitter, Boteach called the letter a “personal attack.” In fact, Dershowitz’s letter was to the point and Boteach was the one using pejoratives like “junketeer,” but then, yes, Dershowitz got personal on Twitter.

“I once made mistake of being in a debate at Harvard with @RabbiShmuley on my side,” Dershowitz said. “He screamed and yelled like a child. Hurt the cause of Israel. I promised never again to be in debate with him.”

I once made mistake of being in a debate at Harvard with @RabbiShmuley on my side. He screamed and yelled like a child. Hurt the cause of Israel. I promised never again to be in debate with him. He only wants publicity not truth. Happy to debate any reasonable expert. https://t.co/qga9XaJfxn

On Monday, the Forward reported that Boteach had clamored to join the same Qatar junket, according to the Jewish PR firm that organized the trips there, but was turned down when the Qataris came to the conclusion that he wasn’t (yikes) influential enough.

Boteach is not quite down — he was on Twitter Tuesday morning still challenging Dershowitz to “repudiate his preposterous sycophantic, obsequious, brown-nosing, & deeply libelous” comparison of Qatar and Israel.

Round 2: Flack vs. flack

In August, Bluelight Strategies, a public affairs firm, began touting a London conference organized by Khalid Al-Hail, a Qatari businessman who is one of the leaders of the political opposition in Qatar. It was an early sign that pro- and anti-Qatari forces were seeking influence among a Jewish audience.

Bluelight is run by Steve Rabinowitz and Aaron Keyak, long experienced in repping progressive causes in the pro-Israel community and pro-Israel causes among progressives. Bluelight’s work was not limited to promoting the September conference to Jews, but Keyak told JTA that was certainly part of its strategy– and of Bluelight’s appeal to Al-Hail.

Then in September, Nicolas Muzin, an observant Jew and a rising star among conservative Republicans, announced that his own government and public relations firm was going to make Qatar’s case to the Jewish community. A trade publication said his fee was $50,000 a month.)

“Engagement with Qatar can only be in the best interests of the United States and the Jewish community, as we cannot allow Qatar to be ostracized by its neighbors and pushed into Iran’s sphere of influence,” he said at the time.

This seemed to set up a partisan cast to the appeals: Muzin (who has advised the House Republican caucus, and Sens. Tim Scott of South Carolina and Ted Cruz of Texas), was the Republican representing Qatar. Keyak, who has worked for House Democrats, and Rabinowitz, a veteran of the Bill Clinton White House, were the Democrats repping Qatar’s antagonists.

In fact, while the hirings of Muzin, Keyak and Rabinowitz signaled how seriously foreign actors take the American Jewish community, the flacks, in this case, were playing in different arenas. The Bluelight hiring was a one-off, ahead of a conference. (Keyak and Rabinowitz for a short period also touted an October conference in Washington that slammed Qatar, but edged away when Steve Bannon, Trump’s former top strategic adviser, was invited as a keynote.) Muzin is drawing a monthly salary from Qatar (now $300,000, according to Politico), and so is more invested long-term in his assignment. Paying Muzin to be persistent had dividends — he arranged for the five and counting pro-Israel leaders, including Menachem Genack of the Orthodox Union and Hoenlein, to visit the country.

Keyak and Rabinowitz were working for an individual, and thus not subject to the stringent restrictions of the Foreign Agents Registration Act. Muzin must make public his payments and whomever he meets with to advance his agenda.

In September, the Zionist Organization of America dismissed its invitation to visit Qatar.

“Rather than change any of those monstrous and evil actions, Qatar may be trying to create the optical illusion of Jewish support to moderate their image by hiring a well-connected PR firm and by having ‘secret’ meetings with Jewish leaders – which of course won’t be a secret, as the whole reason for the meetings may be for the Qataris to point to them as evidence that the ‘Jews’ (and thus Israel) don’t view them as enemies,” ZOA President Morton Klein said in a release at the time.

Klein soon changed course: He visited Qatar in January, and yes, it was leaked to Haaretz. Why did he go?

“At first I refused because of their support for Hamas and the anti-Semitism being broadcast on Al Jazeera,” he told the newspaper. “But over time, I saw that more and more Jewish leaders were going there, and I realized that at this point, they won’t be able to use me for propaganda because everyone is already going, but I might use the visit to push them on these issues.”

Klein subsequently spoke to the Jerusalem Post’s Seth Frantzman and clearly emphasized two things: He was not paid for the visit; and he did not hold back. The ZOA put together a 50-page report on Qatar’s perceived transgressions against Israel, and Klein said he handed it to every official he met and had a two-hour conversation with the emir of Kuwait.

“Reports relayed to me said I was the roughest and toughest of all the leaders in presenting the issues,” he told Frantzman. “Some others were obsequious and overly warm and overly friendly. I was forceful and focused.”

Roughest and toughest, but boy did Klein appreciate those Qatari pajamas.

“The airline had great service,” he told Frantzman. “They handed out pajamas, the softest I ever felt. I wear them every night.”