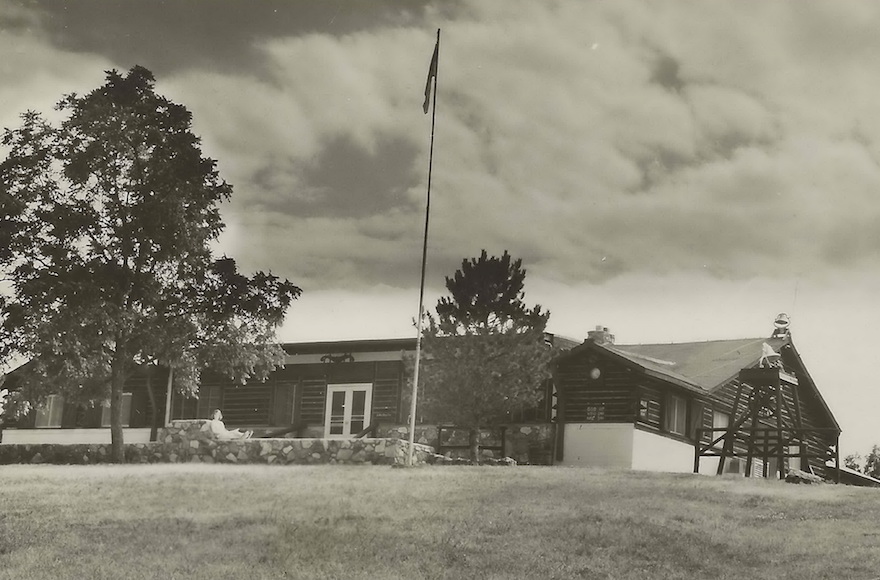 Camp Wah-Kon-Dah in Rocky Mount, Miss., on the Lake of the Ozarks was a camp for Jewish youth from St. Louis. (Frank E. Green/Flickr)
Advertisement

NEW YORK (JTA) — Long before “Wet Hot American Summer,” the Jewish summer camp fired the literary imagination. A summer away at camp provides escape, romance, nature, slapstick, self-realization and a varied cast of characters thrown together in a hothouse atmosphere — all grist for a fiction writer.

Camps also kept pace with the generations of writers who spent their summers there. The first wave of camps offered inner-city kids fresh air and a break from their often overcrowded homes. The next wave featured Jewish education and acculturation, from left-wing, politically conscious Workmen’s Circle camps to Zionist camps like Habonim Dror’s Camp Naaleh to denominational camps like the Reform movement’s Union Institute in Oconomowoc, Wisconsin. Modern camps come with more bells and whistles, but at their core are factories for Jewish memories.

Here are seven works that capture the summer camp experience, for better and for worse.

“City Boy: The Adventures of Herbie Bookbinder,” by Herman Wouk (1948)

The author of “The Caine Mutiny” looks back on the pains and pleasures of growing up in the Bronx in the summer of 1928. Chubby, awkward Herbie Bookbinder connives to spend the summer at Camp Manitou in the Berkshire Mountains, which is run by by his school principal, in hopes of wooing the red-haired girl of his dreams. The plot revolves around Herbie’s attempt to construct a crowd-pleasing attraction for the camp’s annual Mardi Gras carnival.

Key quote: “Herbie’s vision of Camp Manitou had been woven of rainbows. He had dreamed of smooth, grassy playing fields freshly marked in white, luxurious cottages, a wide, gleaming lake with a sandy beach, and sundry other charms compiled from books of English school life and movies laid in summer resorts. The reality was a mud puddle after the rain.”

Goodman was a leading Jewish New York intellectual who in the 1960s became a guru of the anti-Establishment. He is less well known for his fiction, which includes this collection of autobiographical stories set at a soon-to-go-broke Jewish summer camp on Lake Champlain. There the children are taught Yiddish and Zionism, and the young narrator, Matthew, struggles with the demands of Jewish practice and belief. Instead he is drawn to a French-Canadian canoeist and outdoorsman who kindles his homosexual desires.

Key quote: “I feel at home, as if I had been staying here all summer, though everything is strange and new; I seem to recognize everyone, rather than to be seeing them for the first time.” 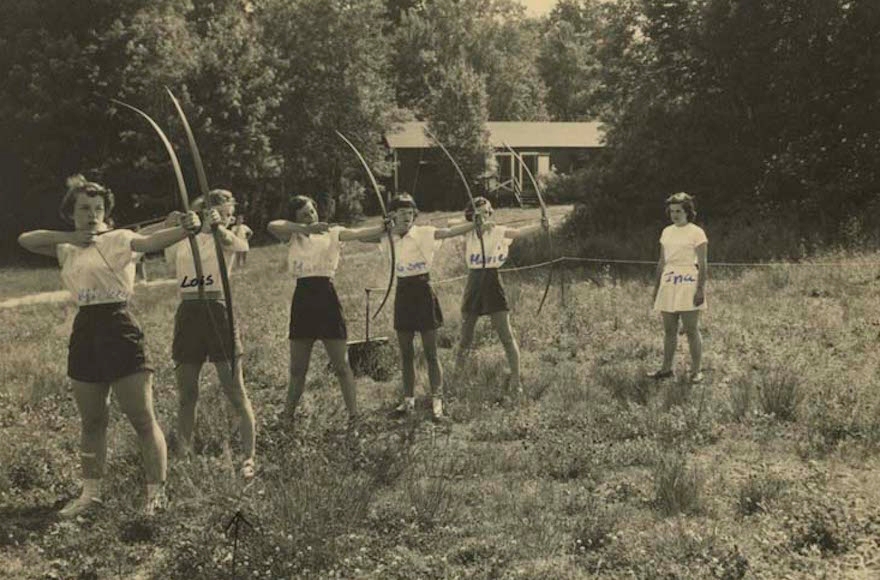 Campers at Camp Watitoh in Becket, Mass., in 1950. Established in 1937, the camp continues to mark Shabbat on Friday nights. (Center for Jewish History)

Klane is best known for the blacker-than-black humor of his 1970 novel “Where’s Poppa?” and the George Segal film it inspired. He also wrote the screenplay for the 1989 movie comedy “Weekend at Bernie’s.” His debut novel — long out of print but still vouched for by loyal readers as one of the funniest novels ever written — was a sex romp featuring the dyspeptic Nemiroff, the only Jewish counselor at the Jewish-owned, rundown Camp Winituck. The book gets its title from the “gentle” horse used at the camp riding school (it’s actually dead).

Key quote: “Ever since the first day of camp, Mr. Hartley had been unable to locate the group that had been assigned to him. Rumors had it that the entire group had defected to another nearby day camp, where they were busy plotting a coup to take over Camp Winituck with the intention of killing Mr. Hartley the minute they were in command. It was supposed to be a mercy killing. A few of the parents had started to complain about Mr. Hartley’s losing their children, but none of them insisted on an investigation right away. They did not want to risk finding their kids until the summer was over.”

Roth’s slim novel looks back on a polio epidemic that falls hard on the storied Jewish community of  Newark, New Jersey, in 1944. Although largely set on the streets and playgrounds of Roth’s old Weequahic neighborhood, the novel’s action shifts to a summer camp, Indian Hill, in eastern Pennsylvania. Protagonist Bucky Cantor has joined his girlfriend Marcia to escape the disease, but even when alone with Marcia or leading kids in athletic contests, he can’t shake off the guilt he feels about surviving an epidemic that has struck down others.

Key quote: “As for God, it was easy to think kindly of Him in a paradise like Indian Hill. It was something else in Newark—or Europe or the Pacific—in the summer of 1944.”

The debut young adult novel by an award-winning Canadian author takes place at Camp Arava, a Jewish sleepaway camp where the supernatural has a way of breaking into the everyday. Thirteen-year-old Dahlia encounters two girls who are dressed in vintage clothing — they may or may not be ghosts — and sets out to unravel their identities on the basis of Jewish folklore, kabbalah and old-fashioned campfire tales. Summer camp is a “great setting for a coming-of-age story because for lots of kids, summer camp is the first time in their lives that they are really free to define themselves outside of the umbrella of their family,” Goelman told an interviewer.

Key quote: “Her father maneuvered their minivan around the periphery of the central sports field, pulling up in front of a double cabin next to the bathrooms. He turned off the engine and said, ‘Here we are: Tzrif Grofeet. Tzrif means “bunk.” You’re going to learn a lot of Hebrew without even knowing it.’

“‘And you say magic camp is useless,’ Dahlia said.” 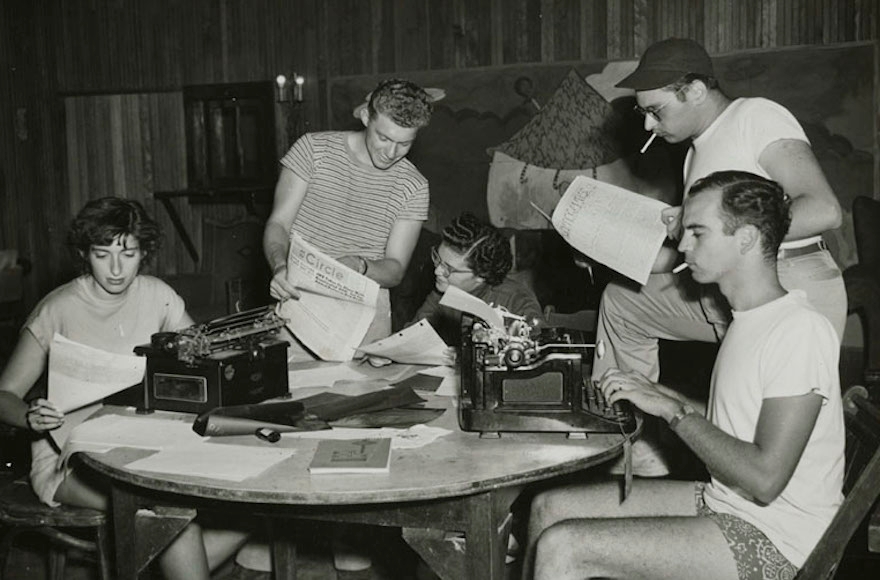 Young writers work on the camp newsletter at Camp Wel-Met in Sullivan County, New York in 1948. The camp was launched in 1935 as the Metropolitan Jewish Centers Camp Association. (Center for Jewish History)

Mann self-published this novel, which went on to win the 2016 National Jewish Book Award for Young Adult Literature. Reena, 14, is a reluctant newbie at Camp Tova, where her parents met 20 years before. Reena’s summer away is an opportunity to learn more about her late mother, whose story is also told in an alternating narrative.

Key quote: “Behind the photo was a box of yellowing letters and ancient glossy photographs. She picked out a letter addressed to Mara, and put it back, feeling she probably shouldn’t go through her aunt’s personal things. But she was curious, so she flipped through some of the photos. There was one of Aunt Mara and her mother in one-piece bathing suits, with a lake behind them. And there was one of Mara laughing with a guy with shoulder-length straight hair. It took her a moment to realize it was her dad.”

Auster’s latest novel offers four alternative takes on the life of a Jewish man, Archie Ferguson, born, like Auster, in Newark in 1947. In one of the four versions of Archie’s life, the boy returns to Camp Paradise for another summer, where he reads Mad magazine and J.D. Salinger, writes letters to his best friend back home and learns about sex from older bunk mates. The chapter concludes with an incident Auster says came straight from his own summer-camp days: At the age of 14, while hiking in the rain with other campers, he saw a boy killed by lightning.

Key quote: “Ferguson was happy at camp. He had always been happy there, and it was good to be reunited with his New York summer friends, the half dozen city boys who kept going back year after year as he did. He took pleasure in the eternal sarcasm and humor of their fast-talking, high-spirited selves, which often reminded him of the way American soldiers spoke to one another in movies about World War II …”