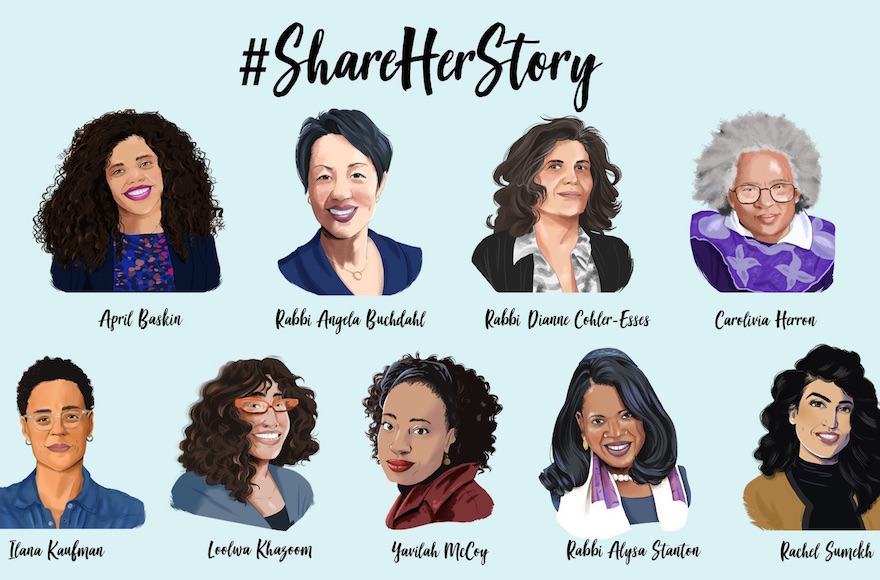 (JTA) — A new online campaign highlights the stories of Jewish women who identify as Sephardi, Mizrahi and women of color.

The #ShareHerStory campaign, which launched on Tuesday, is tied to Purim — the holiday during which Jews celebrate the story of Esther, the Jewish queen who saved Jews from their deaths at the hands of the Persian King Ahaseurus and his henchman Haman.

The campaign encourages social media users to share short bios about women such as Angela Buchdahl, the first Asian-American rabbi and cantor; Dianne Cohler-Esses, the first female rabbi from the Syrian-American Jewish community; and Alysa Stanton, the first African-American rabbi. It was created by the Jewish Multiracial Network, Jewish Women’s Archive and Repair the World.

“Purim is a holiday that teaches us about the power of women’s stories to make change,” Judith Rosenbaum, executive director of the Jewish Women’s Archive, said in a statement. “But these stories can only have an impact if we remember them, and too often, women’s stories are left out of the narrative.”

"In the spirit of Esther’s story, we are sharing stories of modern Jewish women of color, Mizrahi, & Sephardi women, powerful Jewish leaders, whose efforts to strengthen & broaden the Jewish community deserve to be celebrated, emulated, & remembered." #ShareHerStory #Purim pic.twitter.com/38trOVKwYG

Tamara Fish, president of the Jewish Multiracial Network, said Purim served as a good platform to share the stories of Jewish women of color, Sephardi and Mizrahi women.

“The fact that we mark Purim as a holiday is a testament to the power of storytelling. We can learn a lot from this! So in the spirit of Esther, we are ringing out loud the stories of risk-taking and groundbreaking Jewish women of color, together with Sephardi and Mizrahi women, who deserve to be remembered in history,” she said in a statement.

“For hundreds of years, women, people of color, especially women of color, and other marginalized communities have mobilized to fight persistent challenges that face our society,” she said in a statement. “Finally, mainstream institutions and media have started to catch up with those movements. Together, we can act now to amplify their stories.”

Some Twitter users, such as Jonah Pesner, the head of the Religious Action Center of Reform Judaism, have already shared the hashtag.

I have learned so much from these talented leaders, seeing their faces together is magnificent and inspiring @anbaskin @Yavilah #ShareHerStory https://t.co/g6uK3YA0xF