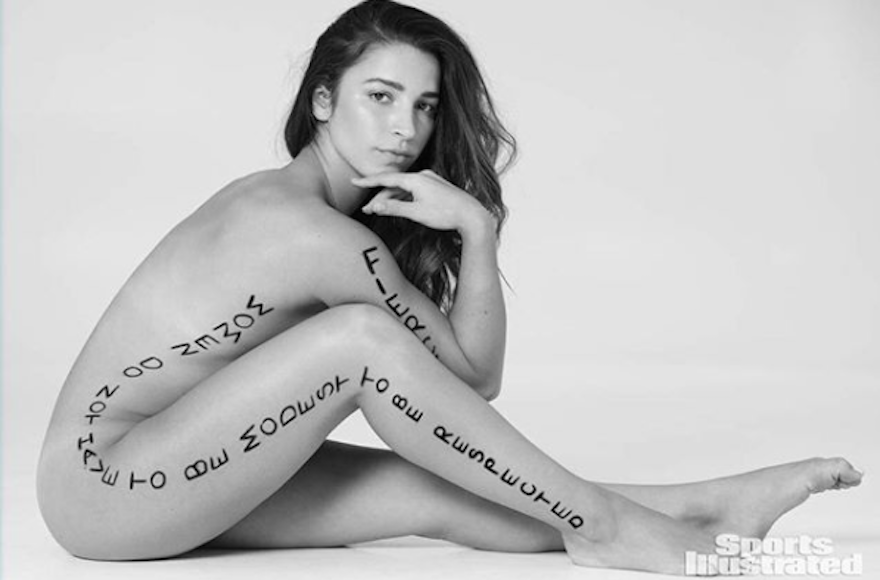 (JTA) — Aly Raisman posed nude for Sports Illustrated for the second year in a row. But this year, the Jewish Olympic gymnast added a message to her photos.

While posing for the magazine’s annual swimsuit issue, Raisman was also included in a new campaign associated with it called “In Her Own Words.” In the separate portrait series, Raisman chose to have words such as “survivor,” “trust yourself,” “every voice matters” and “abuse is not ok” painted on her body.

The 23-year-old Olympic gold medalist’s messages are references to her abuse by Larry Nassar, a former doctor for the U.S. Olympic gymnastics team. Nassar was sentenced to 40 to 175 years in prison for molesting over 150 women and girls over two decades.

Raisman has been one of his most vocal public critics since last fall. A video of her giving powerful court testimony at his sentencing hearing went viral last month.

In conjunction with the photo shoot, she talked to Sports Illustrated about being a victim of abuse.

“I would like to remind everyone that being a survivor is nothing to be ashamed of, and going through a hard time does not define you,” Raisman said.

Some criticized the photos online, saying that nude photographs don’t send a positive message. But Raisman had some thoughts of her own aimed at her critics.

“I hope that we can one day get to a point where everyone realizes that women do not have to be modest to be respected,” she told Sports Illustrated. “We are free to draw confidence and happiness in our own way, and it is never for someone else to choose for us or to even judge us for that matter.”

Raisman endeared herself to her Jewish (and non-Jewish) fans by competing to “Hava Nagila” at the London Olympics in 2012. She also lit the opening flames of the 2013 Maccabiah Games in Israel, and she is set to speak at the Jewish youth group BBYO’s conference in Orlando on Friday.