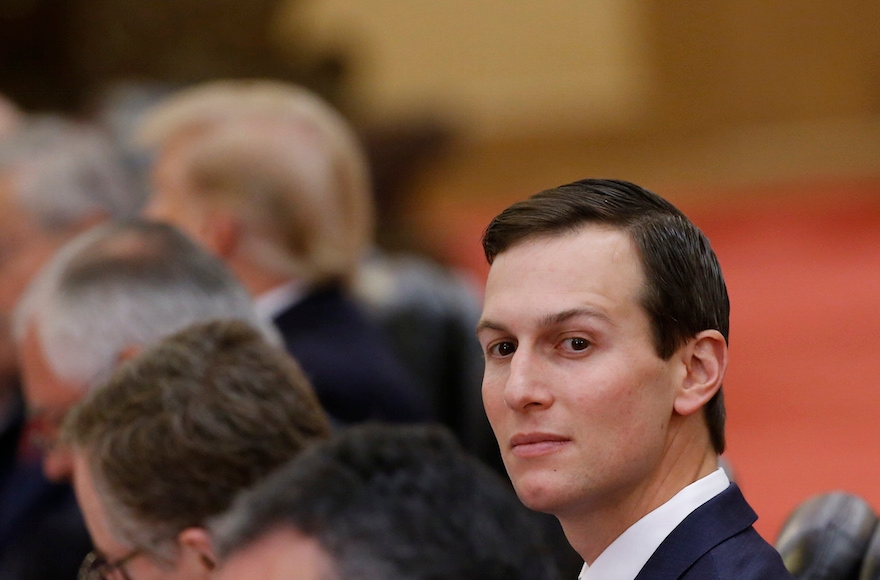 Jared Kushner at a meeting between President Donald Trump and China's President Xi Jinping at the Great Hall of the People in Beijing, Nov. 9, 2017. (Thomas Peter-Pool/Getty Images)
Advertisement

WASHINGTON (JTA) — Nothing should keep Jared Kushner from pressing ahead in trying to achieve Israeli-Palestinian peace, the White House chief of staff, John Kelly, said as reports of a rift between Kelly and President Donald Trump’s key adviser proliferated.

“As I told Jared days ago, I have full confidence in his ability to continue performing his duties in his foreign policy portfolio including overseeing our Israeli-Palestinian peace effort and serving as an integral part of our relationship with Mexico,” Kelly said in a statement released Tuesday to The New York Times.

The Times had asked Kelly about reports that he is rolling back security access for staffers whose security clearance is still pending. Kelly did not directly reply to that line of inquiry, instead releasing the statement on Kushner, who is Trump’s son-in-law.

“Everyone in the White House is grateful for these valuable contributions to furthering the president’s agenda,” Kelly said of Kushner. “There is no truth to any suggestion otherwise.”

Kushner, who is Jewish, leads a team attempting to revive Israeli-Palestinian peace talks. Middle East negotiators traditionally are privy to some of the most sensitive U.S. intelligence about the region.

Kushner has been waiting for clearance for a year. It is not clear what is causing the delay, but Kushner is a focus of a special prosecutor’s investigation of alleged ties between the Trump campaign and Russia. The real estate venture he headed is known to be deeply in debt, including to overseas lenders.

Kushner, according to The Times, believes he has been unfairly singled out by Kelly, who has been tasked with reforming a chaotic White House.