The accusations against Benjamin Netanyahu: What you need to know 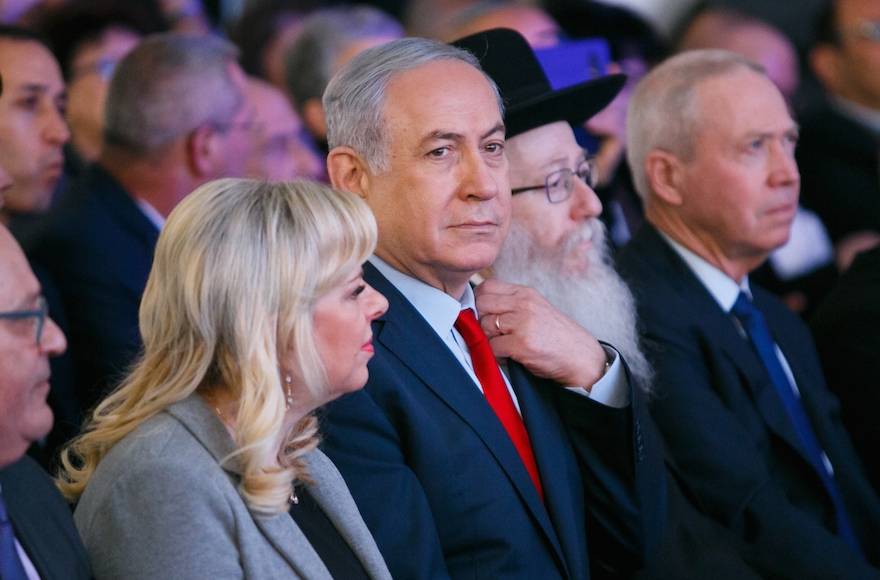 Israeli Prime Minister Benjamin Netanyahu and his wife Sara attending the opening ceremony of the inauguration of the new emergency ward at the Barzilay hospital, in Ashkeon, southern Israel, Feb. 20, 2018. (Flash90)
Advertisement

The Israeli prime minister is engulfed simultaneous in four separate scandals, and each day seems to bring him more bad news. Netanyahu could be indicted or pushed out of office — or both.

Whether this is the beginning of the end of the Bibi Netanyahu era, or just the latest challenge to a seasoned political survivor, is the hot topic in Israel.

At least one of Netanyahu’s friends has turned on him, and the police have recommended that he be indicted. His opponents have put up a billboard on a major highway suggesting he step down. His allies have hemmed and hawed.

All the while, Netanyahu has maintained his innocence, claiming the media and police have conspired against him.

Will it all mean the end of Netanyahu’s nine-year rule? It’s too soon to tell. But here’s a quick guide to the biggest corruption scandal to rock Israel in years and what it means for Jews outside of Israel.

He’s accused of bribery, fraud and obstruction of justice.

Netanyahu is facing an array of allegations that are hard to follow, even for those who follow Israeli politics. Here’s a rundown of the four main accusations:

* Accepting a bribe from Israeli Hollywood producer Arnon Milchan in the form of champagne and cigars totaling about $200,000. The prime minister allegedly returned the favor by pushing for a U.S. visa for Milchan, as well as a beneficial tax break.

* Trying to obstruct an investigation of his wife, Sara. A senior aide to the prime minister allegedly offered the post of attorney general to a judge if the judge agreed to stop the probe. Sara Netanyahu was indicted last year for improperly spending state funds on fancy cooking.

Last week, the Israel Police recommended that Netanyahu be indicted in the first two cases. The third and fourth emerged this week, turning up more heat on the beleaguered leader.

Netanyahu has been in trouble before. But this time it looks real.

The prime minister has been accused multiple times of illegally charging the state for personal expenses, along with other allegations, but none of them has ever resulted in an indictment.

This time could be different. Along with the recommended indictments, in the cases that emerged this week, a close confidant has agreed to become a state witness in return for avoiding prison time.

If Israel’s attorney general decides to indict Netanyahu, it would be an unprecedented legal threat to his leadership.

This could be the end of his nine-year rule.

Will Netanyahu have to resign? Other prime ministers facing corruption scandals have quit before this point in the process. Ehud Olmert, who went to prison for bribery, announced his resignation a couple months before the police recommended that he be indicted.

But it’s unclear whether Netanyahu will leave his post. According to a Feb. 21 poll on Israeli Channel 2, half of Israelis say Netanyahu should step down, as opposed to 33 percent who think he should stay. But none of his political allies are calling for him to resign (something that did happen with Olmert), saying they’ll wait to see if he is actually indicted.

Through it all, Netanyahu has remained defiant, denying the allegations and attacking the police and the media for seeking to topple him. He’s even adopted the term “fake news,” a favorite of President Donald Trump.

“What’s happened over the past two days is simply madness,” Netanyahu said in a video posted to Facebook on Wednesday. “A scandal. False claims are brought, lies, as part of a hunting campaign against me and my family that’s gone on for years … And we know the goal: to forcibly create a public cloud over the prime minister. Simply unbelievable.”

If Netanyahu does resign, it will be the end of a defining era for Israel. He has served as prime minister for nearly a decade, representing Israel pugnaciously on the world stage — opposing Iran, picking fights with (or, as many would have it, standing up to) the Obama administration, courting the Trump administration and taking a (usually) hard line on the Israeli-Palestinian peace process.

His Israeli supporters credit him with guiding Israel through numerous threats in a chaotic region, advocating for Israel internationally, expanding its relations in Africa and Asia, and maintaining a prosperous economy at home. His opponents blame him for diplomatic inaction on the Palestinian front, economic inequality, personal corruption and stoking internal divisions in Israeli society.

Even if he does resign, that does not mean the Israeli government will lurch to the center or left. Netanyahu stepping down would likely trigger an election, and polls show his right-wing Likud party again winning the most votes. His main rivals, centrist Yair Lapid and Avi Gabbay, the head of Israel’s center-left Labor Party, have consistently lagged behind him in surveys.