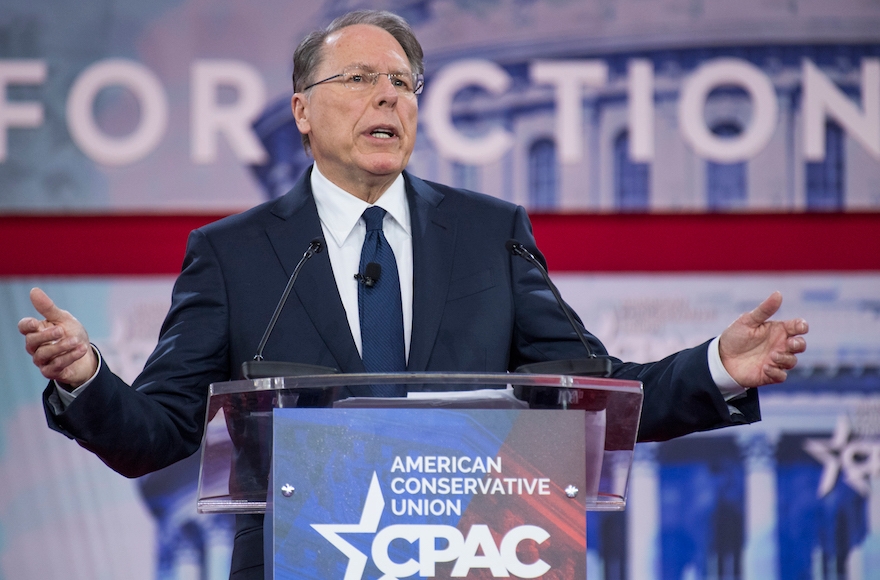 Speaking at CPAC, the annual arch-conservative gathering, LaPierre accused proponents of gun control of promoting “socialism” in the guise of public health and safety. Behind this “social engineering,” he said, are the billions of dollars donated by “people like George Soros, Michael Bloomberg, Tom Steyer and more.”

The fact that he singled out three Jews — and later, the late Jewish community organizer Saul Alinsky — was alarming to many on Twitter and to two columnists for the Israeli newspaper Haaretz. Bradley Burston wrote that LaPierre’s defense of gun rights “included expressions of dog-whistle anti-Semitism reminiscent of the ‘Protocols of the Elders of Zion,’ with descriptions of a powerful plot to destroy America’s freedom by ‘European-style Socialists’ who he said had taken over the Democratic Party.” Rabbi Avraham Bronstein of Long Island’s Hampton Synagogue wrote that LaPierre “delivered a Christian nationalist call to arms that should be chilling to us all” and that the “association of Jews with shadowy foreign threats is not new in this political moment.”

The anti-Semitic fringe heard the same things in LaPierre’s speech.

“The NRA Representing White People Against the Jews” blared a headline in the Daily Stormer, the neo-Nazi website. LaPierre “knows it’s Jews coming for our guns,” wrote Andrew Anglin, the site’s founder. Another neo-Nazi website, Infostormer, declared, “There is no denying the Jewish role in pushing for gun control and it is good to see that the NRA is now indirectly exposing this fact.”

Neo-Nazis hear what they want to hear — the obscene flip side of Jews who are too quick to cry anti-Semitism. Neither are completely reliable judges of what is and isn’t anti-Semitism.

There were Jews who found the accusations of dog-whistling far-fetched. Jonathan Tobin of the Jewish News Syndicate noted that Soros is “arguably the nation’s leading funder of liberal causes” and that Bloomberg has put his money behind an organization, Everytown for Gun Safety, that decries the National Rifle Association’s influence.

“If you were amassing a list of prominent opponents of the NRA, such as the one LaPierre spouted about,” Tobin wrote, “it would be impossible to do so without naming many Jews primarily or even solely known for their politics.”

That seems fair and accurate, and it would exonerate LaPierre if his speech were a reasoned, careful consideration of the challenges to the NRA’s agenda. But because LaPierre’s address was an emotional defense of the Second Amendment, as opposed to one that was legal or intellectual, it’s fair to explore the emotional impact of the words he chose. Soros and Bloomberg? Naming either or both is a surefire way of riling up a conservative crowd — but is that solely because of the causes they back or because they represent an insidious archetype? Perhaps most CPAC members can identify Alinsky, who died in 1972 — or does the name itself signify something alien and ethnic?

Beyond the name checks, LaPierre also delivered an anti-socialist manifesto combined with a religious sermon about providential destiny. The constitutional right to bear arms “is not bestowed by man, but granted by God to all Americans as our American birthright,” said LaPierre, channeling a largely Christian theology that merges Americanism and religion.

Some Jews might agree, although the more typical Jewish approach is to acknowledge that while rights derive from the obligation of all humans to God, government is instituted among mortals to interpret and secure those rights. Regardless, the notion that something so peculiar to the American experience as gun rights is God-given is something you’d rarely hear outside of an NRA rally. I assume LaPierre believes all Americans have the right to bear arms, but this argument appeals almost exclusively to a religious minority (and a minority of a minority at that: A Pew study says evangelicals are as likely to back stricter gun laws as most other Americans).

Which is to say, words matter, and LaPierre chose words meant to appeal to a particular audience — one that quakes at the notion of a socialist takeover of America and shivers at the idea of godless billionaires who would take away our rights. I wouldn’t call that anti-Semitism, but it is certainly a gambit that comes straight out of an anti-Semitic playbook. At the very least it echoes the paranoid-style populism that has almost always defined Jews as Other.

LaPierre’s speech reminded me of the office debate we had as the 2016 presidential campaign drew to a close. That’s when Donald Trump gave a speech in Florida warning that Hillary Clinton “meets in secret with international banks to plot the destruction of U.S. sovereignty in order to enrich these global financial powers …” When that speech was turned into a campaign ad, “these global financial powers” were identified as Soros, Lloyd Blankfein of Goldman Sachs and Federal Reserve chair Janet Yellen — all Jews. My colleagues and I debated whether it was OK for a Jewish news service like ours to say that the speech echoed a number of ominous anti-Semitic tropes. In the end Ron Kampeas, JTA’s Washington bureau chief, wrote just that — always carefully noting that neither Trump nor the ad had specifically spoken about Jews. After speaking with various Jewish observers, Ron wrote that the Trump campaign “entered what many saw as a territory, real and ideological, where hostility to Jews perpetuates and thrives even in their absence.”

In thinking about anti-Semitism, I am always drawn back to what former Harvard President Lawrence Summers said about the connection between harsh anti-Israelism and old-fashioned Jew hatred.

“[P]rofoundly anti-Israel views are increasingly finding support in progressive intellectual communities,” he said. “Serious and thoughtful people are advocating and taking actions that are anti-Semitic in their effect if not their intent.”

I would hesitate before calling anyone — a campus BDS activist or the leader of the NRA — an anti-Semite. I can’t judge their intent. But I can note the effect of their words and actions. And if they do edge too close to classic anti-Semitic tropes — that territory where hostility to Jews thrives — I think it is fair and necessary to point it out.