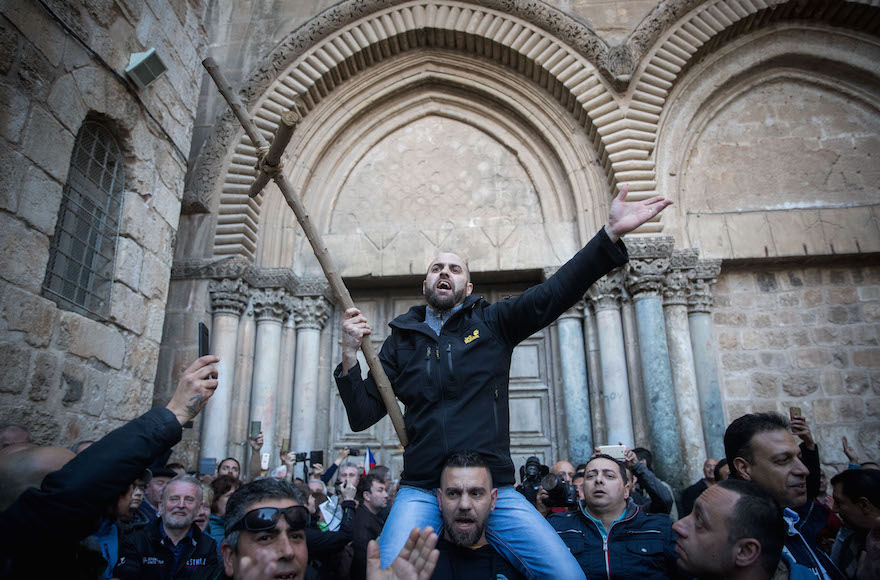 Protestors demonstrating outside the closed doors of the Church of the Holy Sepulchre in Jerusalem's Old City, Feb. 27, 2018. (Yonatan Sindel/Flash90)
Advertisement

JERUSALEM (JTA) — The Church of the Holy Sepulchre in Jerusalem, one of Christianity’s holiest sites, reopened after a three-day protest by church leaders.

The decision to reopen the church, a major destination for Christian tourists to Israel, was made early Wednesday morning, hours after Prime Minister Benjamin Netanyahu announced that a team of lawmakers led by Minister for Regional Cooperation Tzachi Hanegbi, including representatives of the Ministries of Finance, Foreign Affairs and the Interior, and the Jerusalem Municipality, will work together with representatives of the churches to come to a solution on municipal taxes, which would apply to church investment land holdings, not houses of worship.

The announcement also said that the Jerusalem Municipality will suspend the new tax collections undertaken in recent weeks that, in part, led to the protest and closure.

The Jerusalem municipality had said it would collect about $186 million in what it said are back taxes owed by churches and international bodies with property in the city.

The church is believed to be the place where Jesus was crucified, buried and resurrected. The church is under the administration of the Greek Orthodox, Armenian and Roman Catholic churches.

“After the constructive intervention of the Prime Minister, the churches look forward to engage with Minister Hanegbi, and with all those who love Jerusalem, to ensure that Our Holy City, where our Christian presence continues to face challenges, remains a place where the three Monotheistic faiths may live and thrive together,” the church leaders said in a statement.