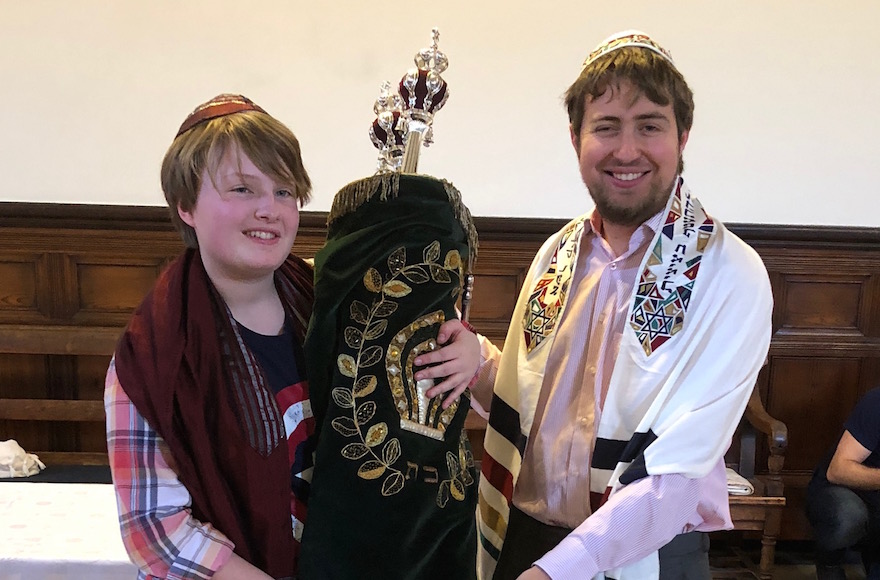 (JTA) — When Esther Thorpe came out as non-binary a year ago, identifying neither as male nor female, Miriam Taylor Thorpe was worried. Esther’s mother already had a child come out as gay and feared that Esther, 14, would have trouble finding a Jewish community that would be accepting and inclusive.

The family was already planning for Esther’s bat mitzvah, but with the new revelation, Miriam wondered how her child could be comfortable taking part in a Jewish ceremony whose very name — bar mitzvah for boys and bat mitzvah for girls — is gendered.

“I was quite concerned because if something is important in your coming of age, it should reflect who you are in a person and not squeeze you into the traditional two genders that we happen to have just because of history,” Miriam, who lives with her husband, Martyn, and seven children in the village of Otterburn, in northeast England, told JTA.

As transgender and gender nonconforming people gain more acceptance, synagogues are having to think about how to welcome those with a diverse set of gender identities. Statistics about gender identity in children are hard to come by, but a University of Minnesota study published last year found that 2.7 percent of children in the state identify as transgender or gender nonconforming.

Catherine Bell, senior director of program and leadership at Keshet, a Massachusetts-based group that promotes LGBTQ equality, said the organization gets requests on how to make religious ceremonies inclusive of different gender identities.

“A real frontier for the work that Keshet does these days is around gender identity and gender diversity, a lot around transgender inclusion and making sure non-binary and trans youth are included,” Bell told JTA.

The Union for Reform Judaism — the congregational arm of the movement in the United States — has a toolkit for synagogues that includes a section on how to tailor b’nei mitzvah ceremonies to align with the child’s gender identity, said Rabbi Leora Kaye, director of program.

“What we’re seeing now is that there are families and there are congregations that are very open to exploring with the kids that are becoming bar and bat mitzvah how they want to be identified,” Kaye told JTA.

The Thorpe family worked with the student rabbi of their synagogue, York Liberal Jewish Community, to adapt the ceremony, which was held in December. Gabriel Webber is a first-year student at London’s Leo Baeck College, a rabbinical school associated with the Liberal movement, a partner under the worldwide Reform umbrella. As part of his research ahead of the ceremony, he came across examples of ceremonies for non-binary children in the United States but not in the United Kingdom.

“Although this is the first one that we’ve had on the radar, it’s going to be far from the last one,” Webber said. 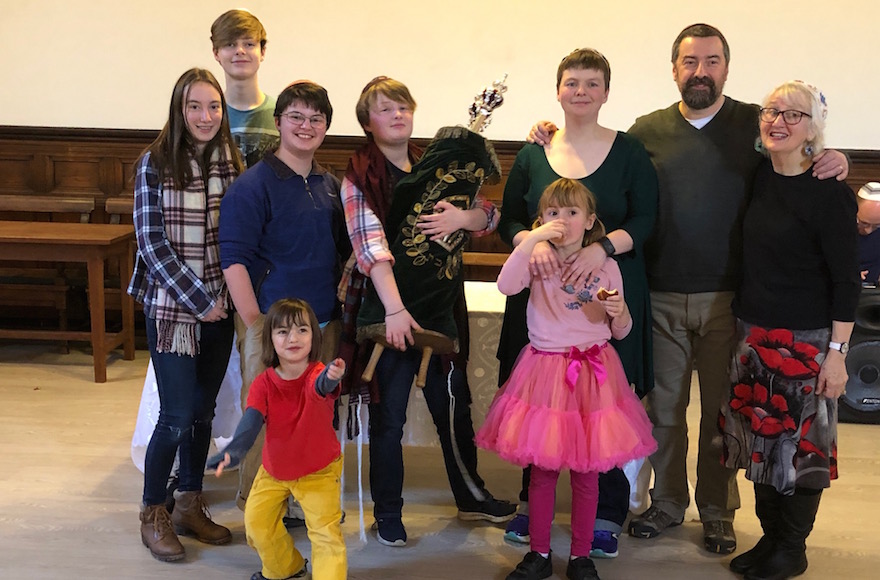 Webber spent a lot of time thinking about how to eschew gendered words in Hebrew during what they came to call Esther’s b’nei mitzvah, using the Hebrew plural term b’nei, which could refer to a mixed-gender group of people. Esther uses “they” as a singular pronoun rather than “he” or “she.”

Before settling on b’nei mitzvah, Webber looked for other possibilities. He found that other non-binary people had used terms such as “ban mitzvah” (“ban” is a made-up word that combines the Hebrew words for boy and girl, “ben” and “bat”) and “zera mitzvah” (“zera” means seed or offspring in Hebrew).

He also looked into how to call up Esther to read from the Torah. Traditionally, readers are called up using their first name in Hebrew followed by “ben” or “bat” (son or daughter) and their parent’s or parents’ names.

Finding the right way to be called up to the Torah held a major significance for Esther.

“It felt like a big responsibility for other non-binary kids in the future,” Esther told JTA in an email.

Using a Hebrew name that relayed family ties and fit into the larger Jewish tradition was important to Esther, said their mother, who wrote about Esther’s b’nei mitzvah in The Jewish Chronicle.

“If you have a name that doesn’t give that tie into your family and your history, you are much more isolated, and that compounds isolation that I know Esther still does feel — if you are non-binary or trans and you are the only person in your shul that are already in a different position,” Thorpe said.

In the end Esther chose “Esther m’beit Miriam,” meaning “Esther from the house of Miriam.”

In addition to the liturgical changes, Esther had of course to read their Torah portion and write a drash, or sermon. Since the family lives a three-hour drive from York, Esther did their learning via videochat with Webber and a congregant, Hava Fleming.

In December, Esther led the service in front of some 100 people. Afterward there was a celebration with food, ice cream, popcorn machines and doughnuts, as the rite fell during Hanukkah. The event was significant not only because it may have been the country’s first gender-neutral b’nei mitzvah but also because it was York’s first bar, bat or b’nei mitzvah ceremony in over 50 years. The city’s Jewish history is mainly known for a 12th-century anti-Semitic massacre in which all the Jewish residents were killed.

Despite the adaptations, there were still some lingering issues. Though immediate friends and family were respectful of Esther’s gender identity, others gave “bat mitzvah” cards and gifts geared toward girls, Miriam Thorpe said.

“It was quite easy to make the service be reflective of [Esther being] non-binary, once you have a rabbi that’s on board with it and you have a congregation that’s prepared to take that through,” she said, “and as soon as you left the service you’re back to it’s either a bar mitzvah or a bat mitzvah and there’s nothing in between.”

Still, Esther is happy about how things turned out.

“I feel better,” they said. “I feel part of a community, accepted and acknowledged.”