US will withdraw from Iran deal unless it is fixed soon, Pence tells AIPAC 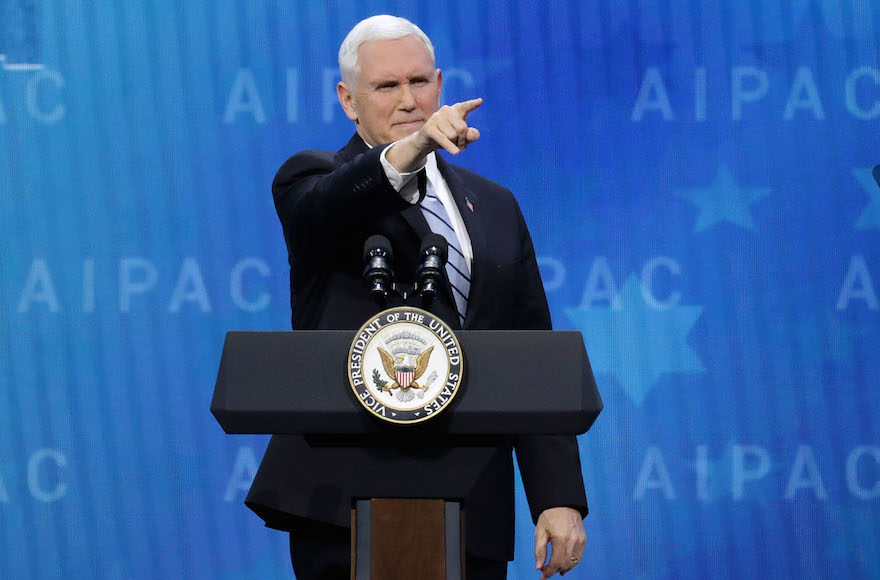 WASHINGTON (JTA) — Vice President Mike Pence said that unless the Iran nuclear deal is fixed in the “coming months,” the United States would withdraw from it.

Pence made the promise, to cheers, during his address Monday night to the annual conference of the American Israel Public Affairs Committee in Washington, D.C.

The deal, which was signed in 2015 by Iran, the United States and a group of other world powers, curbs Iran’s nuclear program in exchange for sanctions relief.

President Donald Trump opposes the agreement. In October, he declined to certify that Iran was complying with it, but he has yet to fully withdraw the United States from the accord, instead asking Congress to pass legislation altering the pact.

Pence told AIPAC that Trump waived the sanctions to give U.S. lawmakers and America’s allies time to act.

Pence, like several of the other speakers Monday, praised Trump for recognizing Jerusalem as Israel’s capital and vowing to move the United States embassy there in May. Pence also praised the administration for weakening ISIS, supporting Israel in international forums and giving Israel a large security aid package.

He called Trump “the most pro-Israel president in American history,” but not before slipping up and accidentally calling him “the most pro-life” president. Pence also ended his speech by quoting the Shehechiyanu blessing, which Jews recite on special occasions.

“Thanks to the president’s leadership, the alliance between America and Israel has never been stronger,” he said. “America stands with Israel today, tomorrow and always.”

Also speaking Monday night was U.S. Ambassador to the United Nations Nikki Haley, a crowd favorite who sprinkled her speech with one-liners that drew 12 standing ovations. She repeated the promise that the United States would tie foreign aid to countries’ voting records in the U.N., though she added that would be one of several considerations.