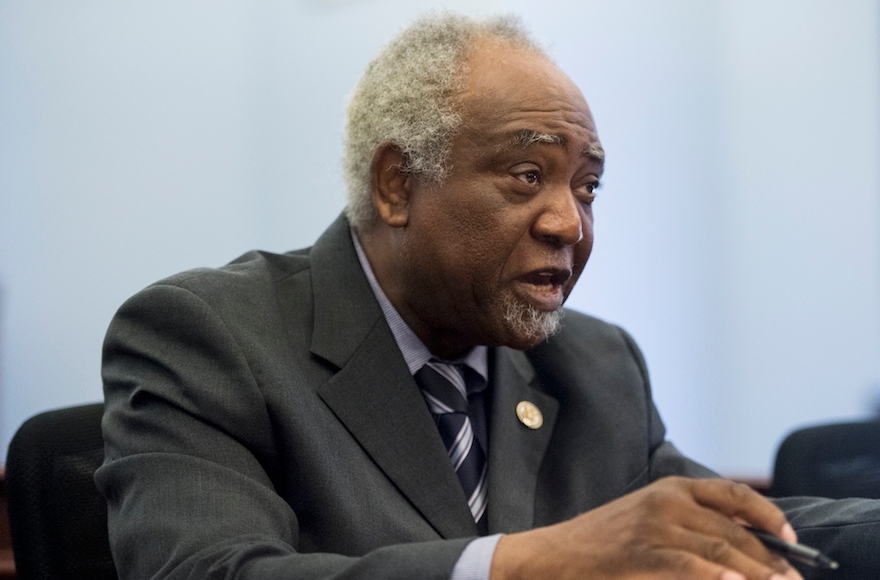 WASHINGTON (JTA) — Rep. Danny Davis, the Illinois Democrat who came under fire for praising Louis Farrakhan, is now condemning the anti-Semitic leader of the Nation of Islam.

“There have been attempts to question my commitment to these principles because I did not specifically single out the views and remarks of Minister Louis Farrakhan,” Davis said Thursday evening, referring to an earlier statement in which he opposed “all forms of hatred, bigotry and separatism based on race, ethnicity, religion, gender, disability or language including specifically anti-Semitism.”

“So let me be clear: I reject, condemn and oppose Minister Farrakhan’s views and remarks regarding the Jewish people and the Jewish religion,” Davis said in his statement Thursday.

Farrakhan, a vocal anti-Semite for decades, recently gave a speech laced with anti-Semitic statements. There have been calls in the speech’s wake on anyone ever associated with Farrakhan to disavow him, including on figures who had disavowed him in the past. The Republican Jewish Coalition called on seven members of Congress who it said met with Farrakhan in recent years to resign, although its statement did not substantiate most of the meetings it said took place. All are members of the Congressional Black Caucus.

One of the members listed in the RJC statement was Davis. Two others, Reps. Barbara Lee, D-Calif. and Gregory Meeks, D-N.Y., subsequently denounced Farrakhan on Twitter.

Davis praised Farrakhan as an “outstanding human being” in an interview last month with the Daily Caller, a conservative news site. In another interview this week, Davis told the Daily Caller that Farrakhan’s anti-Semitism does not concern him enough to disavow Farrakhan, who heads a black separatist movement.

Those statements drew condemnation from the Anti-Defamation League, which had previously accepted Davis’ claim that the Daily Caller has misquoted him, and the Jewish Democratic Council of America. They also led J Street, the liberal Jewish Middle East policy group, to contact Davis for clarification. J Street’s political action committee lists Davis as an endorsed candidate.

“Anti-Semitism is a scourge and Louis Farrakhan is a shameless peddler of it, for which there is no excuse or justification. We condemn his record of anti-Semitism and other forms of hatred unequivocally,” it said in a statement. “We expect Representative Davis and all other members of Congress we endorse to reject Farrakhan’s deeply disturbing views of the Jewish people.”

In the wake of Davis’ latest statement, the JDCA said it “appreciated” his denouncing Farrakhan. “Rep. Davis listened to the concerns of the Jewish community, and responded appropriately, with a strong repudiation of Farrakhan’s anti-Semitism, as the congressman long has on all anti-Semitism,” it said in a statement.