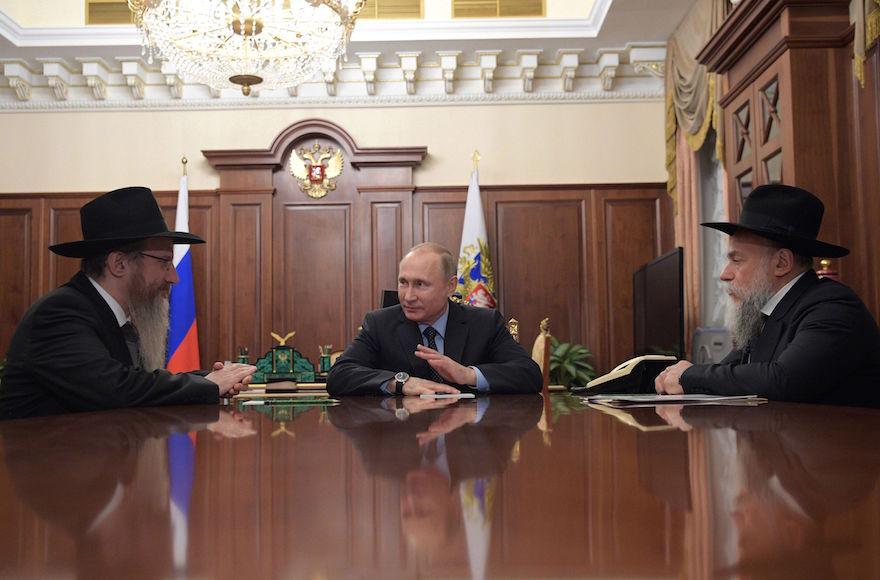 (JTA) — When Boruch Gorin, a well-known rabbi in Moscow, traveled for the first time from Russia to the United States, a U.S. Customs officer asked him whether he was Russian.

The semantics behind the exchange, Gorin said, are the reason that local Jewish groups remained largely indifferent to a remark about Jews aired Sunday by Russian President Vladimir Putin that to foreign ears sounded anti-Semitic.

In the interview with NBC News, Putin said that Russians who allegedly interfered with the 2016 U.S. presidential election perhaps are “not even Russians,” adding “Maybe they’re Ukrainians, Tatars, Jews, just with Russian citizenship. Even that needs to be checked. Maybe they have dual citizenship. Or maybe a green card. Maybe it was the Americans who paid them for this work. How do you know? I don’t know.”

The American Jewish Committee on Twitter said his remark was “eerily reminiscent of the ‘Protocols of the Elders of Zion,’” calling on Putin to “clarify his comments at the earliest opportunity.” Anti-Defamation League CEO Jonathan Greenblatt said that Putin “bizarrely has resorted to the blame game by pointing the finger at Jews and other minorities in his country.”

With his words, Putin is ”giving new life to classic anti-Semitic stereotypes,” said Greenblatt, who also referenced “the Protocols” – an anti-Semitic forgery that was created in Russia in 1903.

Putin was slammed as well for allegedly suggesting that Russian Jews are not really Russians at all. Why single out ethnic minorities, some asked on Twitter, unless to suggest that minorities, just like Ukrainians, aren’t Russian?

The Russian Jewish Congress and the Euro-AsJewish Congress did not immediately reply to JTA’s request for comment on Putin’s remark. Neither group has criticized the Russian leader for what he said.

According to Gorin, “What Putin said seems to have been lost in translation — twice.”

The first time, Gorin suggested, was when the NBC interpreter used the term “Russki” in posing NBC’s question to Putin about Russians who special counsel Robert Mueller has accused of manipulating the election.

That’s significant because in Russian, Russki does not mean a citizen of Russia (the word for that is “Rossianin”) but a person of Russian ethnicity. And since Jewishness is widely recognized in Russia as an ethnicity as opposed to just a religion, Russian Jews are not really considered as ethnic Russians, though they are certainly accepted as Russian citizens.

Russian Jews by and large do not self-identify as ethnic Russians, traditionally followers of Eastern Orthodox Christianity. Indeed, doing so for many Russian Jews would be akin to American Jews declaring themselves White Anglo-Saxon Protestants.

But the adjective “Russian” in English does not have this distinction — that’s why Gorin had to be asked three of four times about his connection to Russia before he understood the subject was not about his ethnicity (a perfectly common and politically correct question in Russia) but his citizenship.

“Putin was asked about the Russian ethnicity, so he replied about that,” Gorin said. “I understand it can appear shocking. I think what he meant to say also is that the people who interfered in the elections were maybe part of the diaspora of former Russian citizens. That’s why he named a few of the largest groups, including Jews.”

Ultimately, Putin was trying to distance Russia from the intervention in U.S. elections — not blame Jews for it, Gorin suggested.

Across Eastern Europe, this linguistic distinction has plagued how officials’ statements are perceived abroad — not least in Poland. Amid rising diplomatic tensions with Israel over rhetoric on the Holocaust, the Polish attorney general, Zbigniew Ziobro, said in January that “after Nazi Germany attacked, millions of people were murdered in occupied Poland, including 3 million Poles.” That seemed to be in reference to the 3 million non-Jewish Poles killed during World War II, suggesting he didn’t consider the 3 million Polish Jews who were exterminated as Poles. But in reality, the word “Jews” in Polish is used to reference primarily ethnicity, not nationality.

Putin’s answer in the NBC interview was translated into English without the nuance crucial to understanding it, said Gorin, who is a senior aide to Russian Chief Rabbi Berel Lazar, the head of the Chabad movement in Russia.

Lazar and his Federation of Jewish Communities of Russia are often accused of supporting Putin unconditionally in exchange for his regime’s seal of approval for Chabad, which has helped the group become the dominant Jewish force in Russia. In reality, Lazar’s group speaks out in harsh terms against expressions of anti-Semitism, including by Putin’s party and officials.

Gorin recently called the ousting of a Chabad rabbi from Russia on vague security-related allegations a “dark day in the history of the Jews in Russia.” And he likened a Russian court’s blacklisting of a rabbi’s book to Holocaust distortion in Lithuania. Gorin also criticized as “patently false” Putin’s assertion that Jews dominated the first communist government — a statement with serious consequences in a country with bitter memories of Soviet oppression.

Gorin’s benign view of Putin’s remark is shared by the chief rabbi of Moscow, Pinchas Goldschmidt. He does not belong to Chabad and in the past has clashed with representatives of the Hasidic group in Russia. Goldschmidt, too, said the outcry abroad over Putin’s remark came down to linguistics.

“The question posed to Putin was most probably whether Russians [meaning Russian nationals] meddled in the elections and it was translated as  ‘Russkis’ [ethnic Russians] meddled in the elections,” Goldschmidt said. “To which he answered, ‘It could have been ethnic Jews, Ukrainians, Tatars with Russian nationality.’ I think this is exactly what happened.”

Whereas other minorities, including homosexuals and some Muslims, have seen their rights significantly curtailed under Putin, Jewish spiritual life is experiencing a renaissance.

The Russian judiciary cracked down on anti-Semitic intimidation that had gone unchallenged under his predecessors. Local authorities have given back dozens of synagogues and buildings that have been confiscated from Jewish communities. And Putin himself urged support for Moscow’s $50 million Jewish Museum and Tolerance Center, which opened in 2012. And next month, Chabad will open Russia’s first Jewish university in Moscow.

Many observers have linked Putin’s favorable policy to the deep impact that Jews have had on Putin from his early childhood in St. Petersburg. In the building where he grew up, he was cared for as a boy by an elderly Jewish couple who lived next door from the future KGB agent and Russian president’s hard-working parents. After his mentor and judo coach, Anatoly Rakhlin, died in 2013, a visibly grief-stricken Putin attended the funeral and ditched his security detail to pensively walk a lonely mile around the corner. Putin even bought his late German teacher, Mina Yuditskaya, an apartment in Tel Aviv.

But Gorin isn’t buying it, he said.

“A lot has been said of the special love that Putin supposedly has toward Jews. I never believed it,” the rabbi said. “Putin is a politician, and the Jewish ethnic minority is just that.”

Russia’s long history of anti-Semitism is evidently behind the indignation by some Jewish Americans over Putin’s remark. But some insist the current reality is more complicated.

“Russia’s history of anti-Semitism goes back centuries,” the Washington, D.C.-based National Coalition Supporting Eurasian Jewry said in its measured statement about Putin’s words. “It is unfortunate that President Putin, who has gone out of his way to support the Russian Jewish community, resorted in this interview to promoting old and offensive stereotypes.”