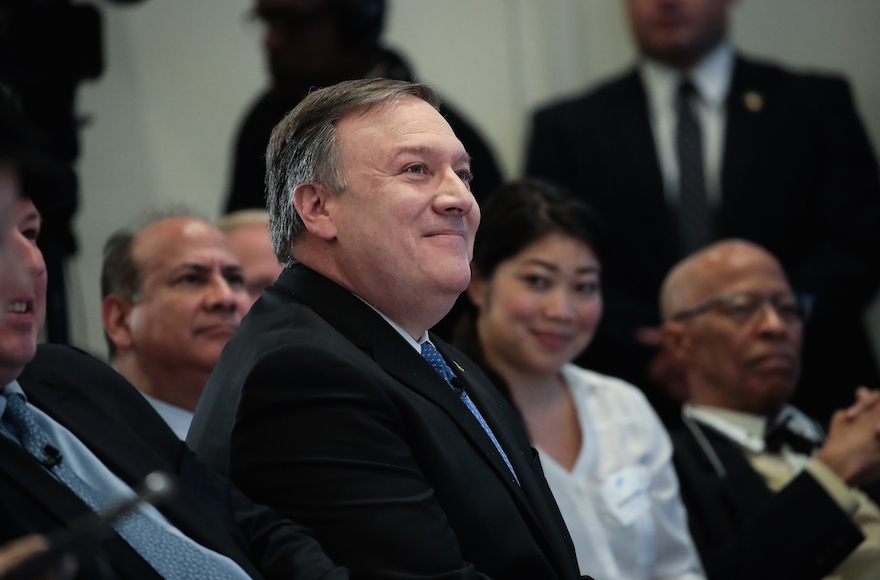 Mike Pompeo, then the director of the CIA, at the American Enterprise Institute in Washington, D.C., Jan. 23, 2018. (Drew Angerer/Getty Images)
Advertisement

WASHINGTON (JTA) — President Donald Trump took to Twitter to sack his secretary of state and replace him with CIA director Mike Pompeo, an Iran hawk who once said that the United States and allied military might handily destroy Iran’s nuclear capability. Naming Pompeo is a signal that Trump could soon abandon the Iran nuclear deal.

“Mike Pompeo, Director of the CIA, will become our new Secretary of State,” the tweet Tuesday said. “He will do a fantastic job! Thank you to Rex Tillerson for his service!”

Trump named Pompeo’s deputy, Gina Haspel, a longtime career officer at the CIA, as the new head of the spy agency. Both positions must be confirmed by the Senate.

Tillerson was one of the Cabinet-level officials staying Trump’s hand on the Iran deal, advising him to stick with what he saw as a bad deal and amend it. Iran is hewing to the narrow parameters of the agreement signed in 2015, and the thinking by Tillerson and others, including Defense Secretary James Mattis, was that the United States would lose the leverage to persuade allies to pressure Iran by other means should Trump seek to kill the deal.

Pompeo, a Republican congressman before assuming his CIA role, opposed the deal, which trades sanctions relief for a rollback of Iran’s nuclear program. One rationale for the pact advanced by the Obama administration, which brokered the agreement, was that the only alternative was a military strike, which Obama officials believed would not necessarily kill Iran’s nuclear program and lead to open-ended war.

Pompeo as a congressman once said that a military strike was doable.

“In an unclassified setting, it is under 2,000 sorties to destroy the Iranian nuclear capacity,” the Kansas Republican said in 2014. “This is not an insurmountable task for the coalition forces.”

Pompeo was also close to Israel when he was in Congress and had praised Prime Minister Benjamin Netanyahu, a fierce opponent of the Iran deal.

Trump must consider by May whether to continue to waive sanctions on Iran, a key element of the deal. He is said to be chafing at abiding by the agreement, and naming Pompeo is a signal that he may be ready to leave it.