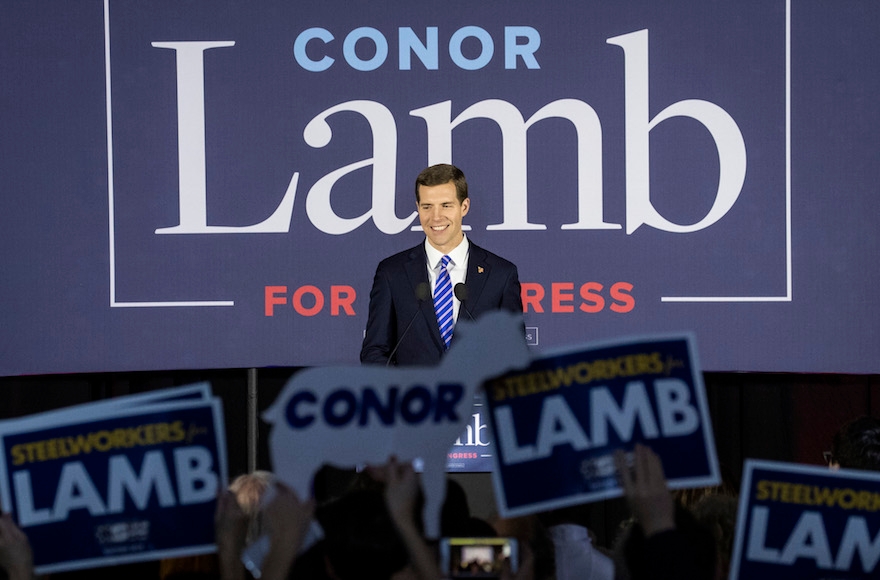 WASHINGTON (JTA) — Liberal Jewish groups hailed the upset victory of a Democratic congressional candidate in a special election in a Pennsylvania district that President Donald Trump won by 20 points in 2016.

Conor Lamb, a former U.S. Marine and prosecutor who rejected the Democratic establishment in his campaign — but ran on a traditional Democratic platform of opposing tax cuts and preserving social safety nets — eked out a win Tuesday in Pittsburgh’s exurbs.

Trump campaigned personally for Saccone, but dissatisfaction in the district with Trump’s failure to deliver on pledges to boost employment, as well as anger among minorities and women at Trump’s perceived broadsides against them, helped drive Democrats to the polls.

With a margin so thin, Jewish groups that had campaigned for Lamb were quick to say their contributions helped make the difference.

The Pittsburgh branch of Bend the Arc, a Jewish social action group, set up a phone bank and knocked on doors to get out the vote for Lamb, a spokesman said. The Jewish Democratic Council of America ran an ad in the Pittsburgh Jewish Chronicle and an op-ed by one of its board members.

The Republican Jewish Coalition targeted Lamb in an email blast after conservative media uncovered a comment that Lamb posted to the Daily Pennsylvanian when he was a student at the University of Pennsylvania during the second intifada in the early 2000s. In the comment, decrying an ad in the paper that said “We stand with Israel,” he said Israeli actions could be defined as “terrorism.”

A Democratic activist who spoke to Lamb said the candidate had told him that he did not recall posting the comment.

The election was held for the seat of Tim Murphy, a Republican, who resigned last year following revelations that he pressured a mistress to have an abortion and allegations that he abused his staff.