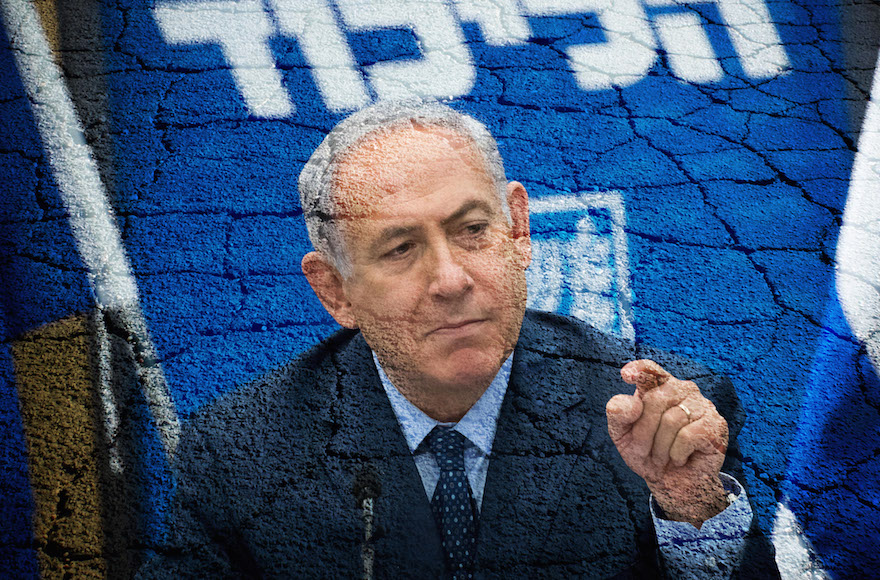 JERUSALEM (JTA) – Israelis tend toward hyperbole. It’s symptomatic of their manic-depressive reality, where a hair’s breadth separates them from tenuous peace and full-scale war with their neighbors.

Depending on whom you ask here, the situation is always “never better” or “never worse.” With Prime Minister Benjamin Netanyahu mired in scandal and Israel still teetering on the brink of elections, the pessimists now have the edge. The optimists need to seize back the initiative.

I worked for over a quarter-century in  the Prime Minister’s Office in Jerusalem, where I pledged to serve a cause larger than myself. Every minute in the building was an honor. I was a professional adviser to elected masters of different political allegiances. That experience inspires me now to sound the alarm.

Netanyahu stands accused of rife corruption. His erstwhile associates have turned state’s witness. Since he has pleaded innocence, a crippling crisis of political legitimacy is unfolding. The upheaval is paralyzing government decision-making.

This is a truly demoralizing moment. Israel’s inception heralded the return of an ancient nation to its ancestral homeland. After the horrors of the Holocaust, it was virtually unimaginable that the Jewish people could ever regroup, much less under its own sovereign flag. Ethical abuses, even if not criminal, are an abomination to this legacy.

Ironically, Netanyahu’s legal troubles come when Israel’s prestige is at its zenith. The country rounded out the Top 10 – just ahead of the U.S. – on Bloomberg’s 2018 ranking of the world’s most innovative economies. The perils of a nuclear Iran have induced rare convergence of interest between the Jewish state and the region’s Sunni monarchs. And Netanyahu himself has been warmly received on every continent save Antarctica. Undeniably, he has done many things right.

This paradox presents an agonizing dilemma for Israelis. Netanyahu’s supporters continue to overlook his apparent indiscretions, clamoring to retain an arguably adept prime minister. With hostilities raging on Israel’s borders, they assert, this is the wrong time to replace Netanyahu with an amateur. Cabinet members are resisting calls to hasten his resignation.

But what of Israel’s core values? The challenge of survival in a dangerous area commands Israelis to put security imperatives first, yet that must never be the sole parameter for leadership. Morality and good citizenship are no less vital to Israel’s health. With former Prime Minister Ehud Olmert just released from jail and Netanyahu facing a possible indictment, the implications for Israel’s future are menacing.

Similar dynamics impact the United States, where polarized politics have corroded the public square. Inexcusable behavior by senior administration officials goes unchecked by partisan allies of the White House. The message sent to our children when misconduct is condoned and civic institutions are disrespected is devastating. Their faith in liberal democracy is being destroyed.

Israel is spiraling toward the polls. Netanyahu’s haredi Orthodox associates, exploiting his vulnerability, nearly brought down his government this week. Palpable mistrust within its ranks all but guarantees continued strain and impending elections.

But this coalition crisis is fortuitous. Israelis should consider it an invitation for sweeping reform.

It’s time to dismantle the party list scheme, in which voters cast ballots only for parties, not individuals. An attempt to produce stable governance in the 1990s by directly electing the prime minister was scrapped five years later, but it was the experiment’s limited scope that preordained its failure. All candidates for parliament should answer to the unfiltered scrutiny of constituents. They need to know that their jobs depend on delivering for the people next door.

It’s also time for term limits. The hubris, entitlement and control accumulating to elected officials who become fixtures of power are sources of rot. Opponents will argue that Israel cannot afford to give the keys to minor leaguers, but the pool of retired generals and mayors is constantly replenishing. New blood is needed to revive the body politic and flush out the infection.

Checks and balances are not something that sitting representatives volunteer to impose upon themselves. But an absurd reality where an overburdened premier, with no designated alternate, can hoard multiple portfolios – or vet the solicitor who determines whether he gets indicted – cries for overhaul. Such repairs will facilitate more responsible management of public affairs and coffers.

Our freedoms become worthless when those who mock them are not held accountable. Voters deserve a process that promotes principled governance. And they are entitled to expect scrupulous behavior from their leaders. It’s intolerable that competence and virtue should be mutually exclusive. Israelis should clean their political homes for Passover, too.

If Netanyahu is indicted and eventually lands in prison, it will be a sad day for all Israelis. But this ordeal will be repeated unless all hands – left and right, conservative and liberal – unite to restore the integrity of law and ethics. A broken system needs to be fixed.

(Shalom Lipner [@ShalomLipner] is nonresident senior fellow at the Center for Middle East Policy at the Brookings Institution. From 1990 to 2016, he served seven consecutive premiers at the Prime Minister’s Office in Jerusalem.)