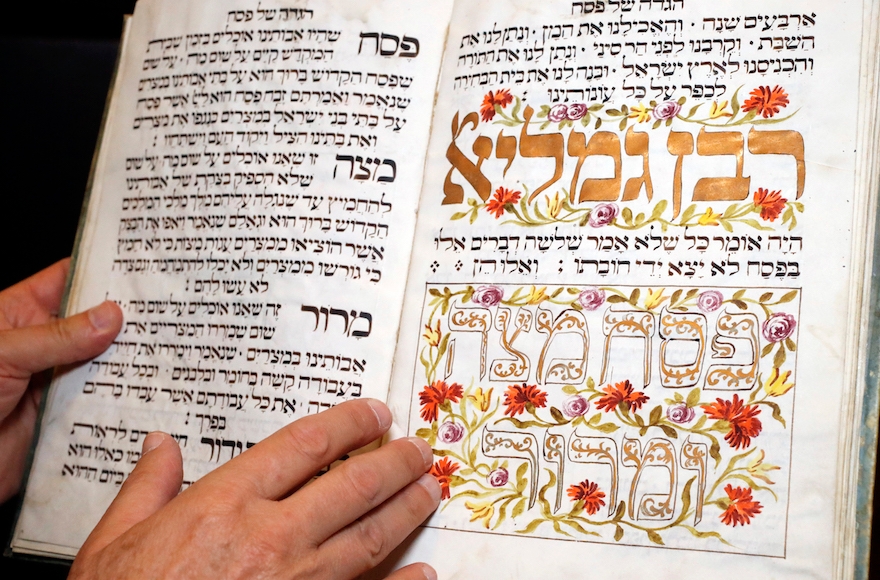 All Haggadahs can benefit from a link to the present. (Godong/UIG via Getty Images)
Advertisement

(JTA) — Although Jews have celebrated Passover by reading from the Haggadah in one form or another for 2,000 years, Jewish organizations and publishers strive each year to connect the holiday to modern times with fresh Haggadahs as well as supplements.

If you’re looking to give your seder a distinct 2018 flavor, consider these options — they bring up topics ranging from Donald Trump to Ethiopian chickpea matzah.

The American Jewish Joint Distribution Committee was sending aid to Jews in need decades before gluten-free matzah was a thing. But one of its newer initiatives for young adults, Entwine, has produced a hip and fun “global Passover toolkit” it’s dubbing “ReOrdered” (a reference to the word seder, which means “order” in Hebrew).

It’s free to order online and comes with several goodies, including a recipe book with traditional Passover recipes from around the world. Then there’s the four “Community Cards,” each highlighting an international Jewish community that the JDC has helped in the past: from Ethiopia, the Soviet Union, Morocco and Sarajevo (in Bosnia and Herzegovina). Each card has a story from someone in that community, a ritual Passover food and a traditional toast. The details are as delightful as they are educational: Did you know Ethiopian Jews make matzah out of chickpeas, or that Bosnian Jews turn eggs black by boiling them with coffee grounds?

The guide also includes a sheet meant to help the seder leader incorporate it all into the ritual meal, coasters and even a matzah box centerpiece with cards for the Four Questions meant to represent the supplies the JDC has sent around the world since World War I. It’s basically a historical, multicultural seder in a box — just add Haggadah and food.

The Trump Passover Haggadah: “People All The Time They Come Up To Me And Tell Me This Is The Best Haggadah They’ve Ever Read, They Do, Believe Me”

Topic: The 45th president of the United States

The Amazon description, like the title, will tell you this Haggadah isn’t for diehard fans of President Donald Trump: “The book guides Seder participants through a re-living of the Jewish people’s suffering under the Egyptians and celebrates their freedom from a vain, capricious, thin-skinned, small-handed, megalomaniacal, temperamentally unfit President— er, Pharaoh. If you’re an afflicted liberal Jew, with an unconservative sense of humor, and you find traditional Seders as dry as matzo, try these radically irreverent political parody Haggadahs this Passover.”

There isn’t much more information on the Amazon page, except that the Haggadah is an online best-seller. Judging from author Dave Cowen’s bylines in McSweeney’s and The New Yorker, it’s probably pretty funny, too.

Formerly the Hebrew Immigrant Aid Society, HIAS was founded in 1881 to help Russian Jewish immigrants settle into the U.S., but these days it lends a hand to all kinds of populations around the world. Its 11-page guide offers a blueprint for weaving refugee references and stories into almost every aspect of your seder, from an Ethiopian saga meant for one of the blessings over wine to a Rohingya mention in the seder plate discussion. It becomes explicitly political at the end and offers tips on how to take real-world action to help refugees.

“In the face of unprecedented efforts to limit refugees’ ability to seek safety in the United States – even as more people are displaced by violence and persecution than ever before – these powerful symbols of both the unimaginable suffering and the boundless resilience and hope of refugees feel particularly poignant,” a statement on the HIAS website reads.

“How do we connect the ancient story of Exodus to modern struggles for freedom as individuals and as a multiracial, multiethnic Jewish community?”

That’s the thinking behind this Haggadah insert and set of trivia cards from the nonprofits Repair the World and Be’chol Lashon, which help connect Jews with volunteer work and promote awareness of Jewish diversity, respectively. The insert asks seder participants to discuss the the Exodus theme, the Rev. Martin Luther King Jr. and what freedom means. The cards contain trivia about international communities, such as the Abayudaya Jews in Uganda or the Jews of Gibraltar.

A landing page for the materials claims that 20 percent of American Jews identify as African-American, Latino, Asian, mixed race, Sephardi and Mizrahi.

Have a non-English or non-Hebrew speaker coming to your seder? Want to brush up on the foreign language skills you haven’t practiced since college? In those cases, for example, you might be interested in a Haggadah in a different language. These offerings from the Kehot Publication Society, an arm of the Chabad-Lubavitch movement, aren’t brand new, but cultural diversity is of the moment. They are all 114 pages and inexpensive.