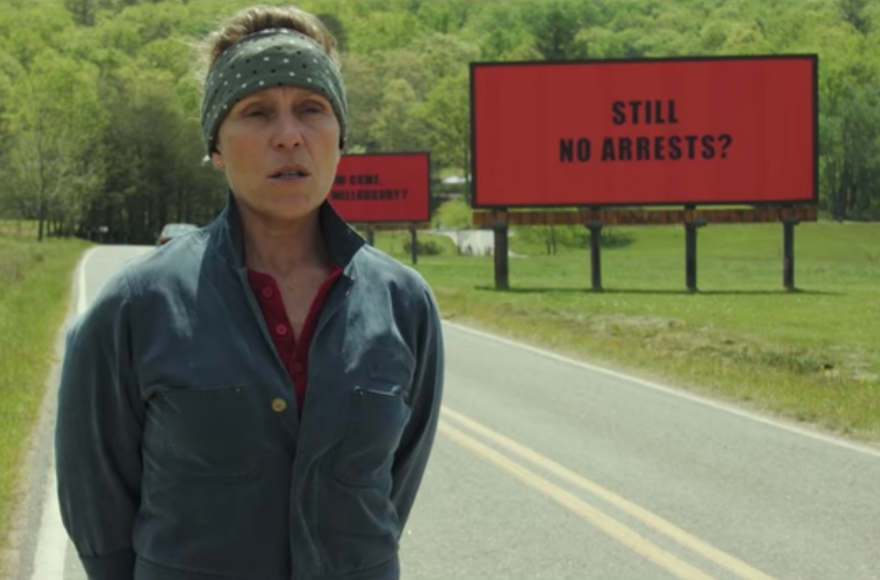 Frances McDormand in a scene from "Three Billboards Outside Ebbing, Missouri." (Screenshot from YouTube)
Advertisement

(JTA) — Inspired by an Oscar-nominated American film, activists against anti-Semitism in Britain raised thousands of dollars for erecting three billboards outside the headquarters of the Labour Party in London.

Days after setting up an appeal for donations on an online crowdfunding platform, the Community United against Labour Party Antisemitism, or Culpa, raised $4,860 of the group’s $6,300 goal for the sign campaign on Victoria Street. Some 100 donors gave to the appeal.

Labour under Jeremy Corbyn, the left-wing politician who was elected to lead the party in 2015, has faced criticism over an alleged failure to counter a proliferation of anti-Semitic rhetoric in the party’s ranks.

The idea for the three billboards came from “Three Billboards Outside Ebbing, Missouri,” a tragicomedy nominated for best picture at the Academy Awards about a mother whose daughter was murdered and puts up three billboards, each one displaying one short sentence accusing the local sheriff of inaction. Her introduction of personal accountability deeply impacts her small town’s social fabric.

The film has inspired several protest actions, including by an activist group called Avaaz that put mobile billboards on trucks and drove them around Miami to call out U.S. Sen. Marco Rubio of Florida for his response to the high school shooting in Parkland last month that left 17 people dead.

The Culpa appeal for donations does not say what messages would be displayed on the billboards, but it does include three short sentences: “Corbyn is a friend of dictators and terrorists”; “Enough is enough. He needs to go. #CorbynOutNow”; and “The Labour Party has no future under Jeremy Corbyn.”

Corbyn called Hezbollah and Hamas his friends in 2009 and said it was an honor to host representatives from those terrorist groups in parliament. He has vowed to kick out any Labour member caught making racist or anti-Semitic statements. Dozens were expelled but many others accused of these actions were allowed to stay or were readmitted.

British Jews and an interparliamentary committee of inquiry have dismissed as unsatisfactory an internal Labour audit that largely cleared the party of anti-Semitism allegations. Earlier this month, Corbyn was found to have been a member for two years of a Facebook group that featured Holocaust denial and anti-Semitic rhetoric. He denied knowing about the content.

On Sunday, two Jewish lawmakers in the municipality of Haringey, near London, said that Momentum activists routinely target them with anti-Semitic comments online.