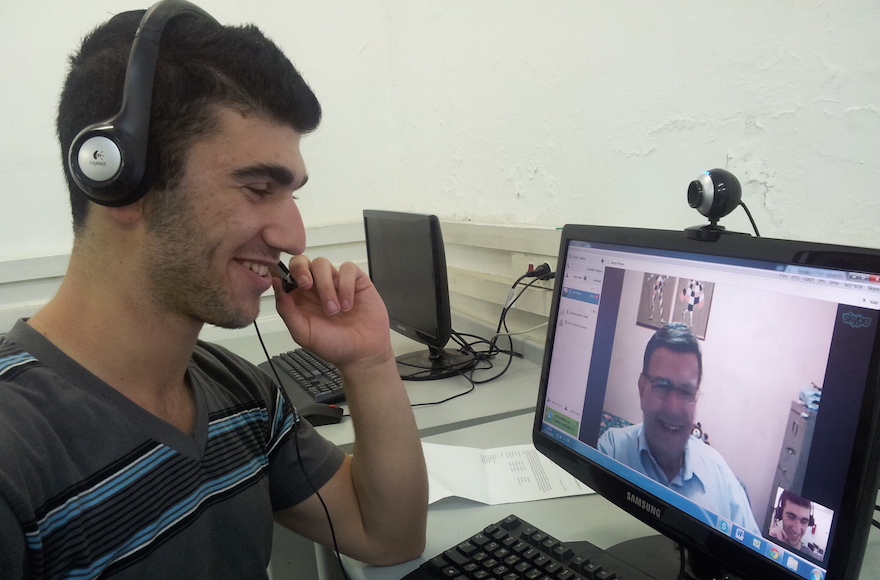 (JTA) — There’s no reason Hodaya Koskas and Barrett Brickell would know each other.

Koskas, 14, is a high school student from a small city in central Israel who takes ballet classes and hopes to be a dancer. Brickell, 71, is a retired schoolteacher from Ottawa, Canada.

But they’ve been video chatting every week since September. The unlikely pairing begins by having Koskas read a one-page English description of a place in Israel — perhaps the Western Wall or a mall. Then they shift into talking about their lives.

Koskas talks about an upcoming ballet competition that, if she wins, could lead to a trip to New York City. Barrett talks about life in Canada — the snow outside his window, the particulars of the local malls. Koskas says she now understands that in Canada, people hit the malls with a bigger bag than in Israel, so they can buy more stuff.

“I feel a connection to another world,” Koskas told JTA of the conversations. “I talk about what’s done there and what’s polite there. We talked about how they shop and how we shop.”

The Israeli teen and the Canadian retiree are participants in Israel Connect, a program where older North American adults tutor Israeli kids in English once a week via video chat. For seniors like Brickell, the program is a relatively easy way to connect with Israel and help kids. For kids like Koskas, the sessions expand their vocabulary, improve their pronunciation and introduce them to North American culture (she now knows how to pronounce “read” in the past tense, for example).

“I want to find out about their personal lives,” said Brickell, who taught fifth and sixth grade for nearly 20 years, and now tutors three kids as part of Israel Connect. “I end up liking them a lot. The time I get to spend with young people is very meaningful to me, and I have a feeling that they enjoy it.”

The program began in 2011 as a side project of Sarah Gordon, a Canadian with Israeli parents who taught Hebrew in Ottawa. A former classmate of Gordon who taught English in Israel told her about some of her Arab-Israeli students who were struggling to pick up what would be their third language. So Gordon matched them with Canadian seniors she knew who could tutor them from afar.

Since then, Israel Connect has mushroomed. It spread to Toronto and a few areas in the United States, from New Jersey to Baltimore to Florida. It now has 400 volunteer tutors, mostly baby boomers and older, and 500 Israeli high school students from 35 schools. Gordon said baby boomers are a good fit because they wake up early and tend to have free time.

The schools are mostly on Israel’s periphery — smaller and often poorer towns that are distant from Jerusalem and Tel Aviv. The students themselves come from a range of religious, ethnic and socioeconomic backgrounds. Gordon said she has a waiting list of 100 schools that want to join, and is hoping to expand her volunteer base.

“Most of our volunteers are connecting with students in towns they’ve never heard of before,” said Gordon, who now co-directs the organization full-time with her husband. “We take the ones that have the strongest need. Some of the schools we work in don’t have English teachers. We have schools where we are the English program — we do not recommend that.” 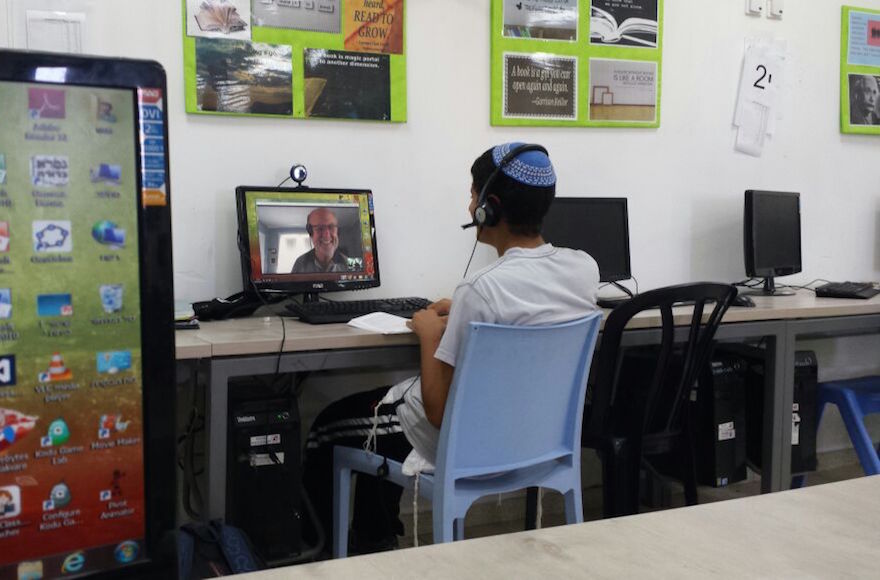 English is usually a key part of the school curriculum in Israel, and is viewed as a gateway to cultural exposure, academic excellence and professional success. Students in Israeli high schools receive four to five hours of English education per week, and an entire section of Israel’s version of the SAT is devoted to English proficiency. But Gordon said most of the students’ practical knowledge of English comes from pop culture.

“They watch a lot of TV and listen to a lot of music,” she said. “It’s not uncommon for them to show up the first week and [as] they’re talking with a retired dentist or brain surgeon, they’ll say, ‘Hey, what’s up, dude.’ And the teacher will say, ‘We start with ‘Hi, how are you?’”

The core of Israel Connect’s curriculum is the one-page handouts on Israeli locales, which come with pictures. Volunteers will help the students read through the paragraphs, and then will discuss them before pivoting to casual conversation.

The only restriction Gordon gives is to avoid politics. Some of the participating schools are in West Bank settlements, and Gordon stresses that the program does not take political positions and aims to serve Israeli kids regardless of where they are. Retired doctors are also told not to provide medical advice.

But Gordon emphasizes that the point of the program is to rigorously teach English, not just to create informal video pen pals. Most of the students’ chats happen while they’re at school, under a teacher’s supervision. Gordon said that out of 300 alumni of the program, all but four scored over 90 percent on the English comprehension section of the standardized test.

“They’re more confident in reading, in their interactions talking with the volunteers,” said Ofira Mor, a teacher at Koskas’ high school. “They have a wider vocabulary.”

But volunteers say that aside from the tutoring, they enjoy having direct exposure to life in Israel through young people’s eyes. Beverly Grostern, a volunteer from Ottawa, took her first trip to Israel in decades after a year of tutoring an Israeli girl.

“It’s reintroduced me to Israeli life, to their food, to their attitude,” she said. “They’re like your typical teenager anywhere. I ask them something, what’s your favorite activity, what do you like to do, and nine out of 10 it’s like, ‘I like to go shopping, I like to visit my grandmother, I like my computer.’”