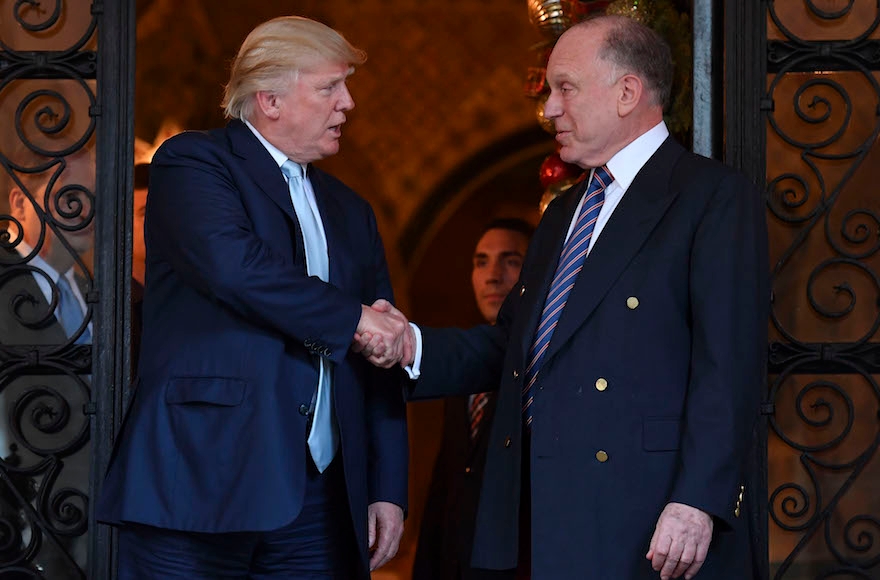 WASHINGTON (JTA) — Twice in 20 years Ronald Lauder made noise by breaking with what is supposed to be a sacrosanct rule of the establishment American Jewish leadership: Don’t hector Israel’s elected government on life and death issues.

In 2001, Lauder, then the chairman of the Conference of Presidents of Major American Jewish Organizations, appeared at an anti-government rally in Jerusalem. Organizers opposed concessions to the Palestinians proposed by then-prime minister Ehud Barak in a bid for a final status deal with the Palestinians that would culminate in a two-state solution.

“All the world should know that you are not alone,” Lauder told the protesters.

This week, Lauder, the president of the World Jewish Congress, took to the Op-Ed pages of the New York Times to warn Benjamin Netanyahu’s government that it risked losing the support of Diaspora Jews — in part because its settlements policies are endangering the two-state solution.

“The specter of a one-state solution and the growing rift between Israel and the diaspora are endangering the future of the country I love so dearly,” he wrote.

What happened? We asked Lauder for comment, but his spokesmen said his Op-Ed speaks for itself. But a dive into the recent past shows how one Jewish philanthropist, with ties both to Netanyahu and President Trump, is able to inject himself into diplomatic wrangling at the highest levels.

The World Jewish Congress is not the Conference of Presidents

Lauder, now 74, may have raised eyebrows in 2001, at the tender age of 56, when he discarded the establishment consensus not to criticize Israel on security matters. His participation at the rally spurred the Presidents’ Conference, the foreign policy umbrella body for U.S. Jewry, to create a rule forbidding chairpeople from speaking out of turn on matters of consensus.

Nowadays, as the leader of the World Jewish Congress, Lauder’s critique is less remarkable. The WJC historically stakes out a more nuanced position than the Presidents Conference when it comes to Israel. WJC leaders have over the years spoken out against Israeli policies if they felt the policies could harm Diaspora Jewish communities.

Nahum Goldmann, the co-founder of the WJC who was its president from 1949-1977, worked tirelessly in diplomatic circles to advance the founding of the state of Israel. He then proceeded for decades to annoy its leadership for failing to more forcefully engage the Arabs in peacemaking. In 2003, Edgar Bronfman, whose presidency ran from 1982-2007, co-signed a letter to President George W. Bush urging him to press Israel not to build its separation barrier.

Things have gone south with Bibi

Netanyahu was out of politics in 2001 when Lauder spoke out against the Barak government’s peace proposals. But Netanyahu was very much active behind the scenes, and still in touch with the American benefactors who backed him during his first term as prime minister, from 1996-1999. Among these was Lauder, who did not fund Netanyahu directly, but who steered funds to Israeli institutions that advanced Netanyahu’s hawkish agenda.

Alleged favors Lauder delivered to Netanyahu over the years led police to interrogate Lauder last year as part of an ongoing corrruption probe. That can’t be a good feeling for any man who hopes to leave his mark on Israel. Lauder, in Jerusalem this week to attend the Global Forum for Combating Antisemitism, was also present at the inauguration of a plaque bearing his name on the Israeli Chief Rabbinate’s building.

Netanyahu and Lauder also had a falling out in 2011: Lauder had a part ownership stake in an Israeli television channel, and refused to block a report it broadcast that was unflattering to Netanyahu and his wife, Sara.

Lauder, someone close to him confided to JTA, has also realized in recent years that attaching oneself to a single leader (Netanyahu), a single party (Likud) and a single outlook (conservative) will not get him the attention he seeks to burnish his credentials as an original thinker. Mixing it up helps Lauder accrue influence, this thinking goes.

Notably, Lauder appears also to be hedging his bets. His staffers are distributing a Hebrew version of the Op-Ed that speaks of Israel in more personal terms than the New York Times version. Whereas in the Times, Lauder expresses pride that “the Israeli Army is stronger than any other army in the Middle East,” in the Hebrew version he recounts the particular fears he felt on the eves of the 1967 Six-Day and 1973 Yom Kippur wars.

“I gave my all in the good days and the bad,” he writes in the Hebrew version, addressing his readers as “brothers and sisters.”

It’s been 17 years, and things have changed, maybe not for the better

That’s what helped propel Ariel Sharon (who had replaced Netanyahu as Likud Party leader) to the prime ministership within weeks of the Jerusalem protest. It’s also why the Presidents Conference, four years later, backed Sharon’s withdrawal from the Gaza Strip and part of the West Bank, despite opposition from its hawkish members.

That alarms some mainstream U.S. Jewish groups. The American Israel Public Affairs Committee this month for the first time got out ahead of both the Israeli and the American governments and emphatically embraced a two-state outcome.

Lauder in his Op-Ed suggested he no longer could look the other way. “Sometimes loyalty requires a friend to speak out and express an inconvenient truth,” he wrote.

Naftali Bennett, the education minister and the leading Israeli Cabinet official opposed to the two-state solution, rebuked Lauder publicly at the anti-Semitism conference.

“I read your piece in the New York Times, not a great piece, I very much respect you – but I disagree,” he said. “I also do not see moral equivalence of settlement building, what I call building communities in our homeland, and Palestinian incitement. It is not the same thing.”

Lauder has been friendly with Donald Trump since they were both second-generation moguls in the 1980s — Lauder, running the cosmetics empire founded by his mother Estee and Trump, a real estate business founded by his father Fred. No other established Jewish leader appears to be as close to Trump. When even Trump’s most ardent defenders in the Jewish community criticized the president for leaving Jews out of a statement marking International Holocaust Day in 2017, Lauder rose to Trump’s defense.

Trump officially is agnostic on the two-state solution, and little is known about the peace proposal he plans to unveil soon, drafted by his son-in-law, Jared Kushner. The likelihood, however, is that it will advance the two-state solution, even if not in explicit terms. Trump’s top negotiator, Jason Greenblatt, has called on the parties to adhere to previous precepts, including President George W. Bush’s 2003 Road Map — a plan that culminates in two states.

Lauder’s Op-Ed could be a signal to Netanyahu not to scuttle the Trump-Kushner-Greenblatt initiative even before it is born. It’s noteworthy that Lauder made his warning not in an Israeli newspaper, or in a speech delivered in Israel, but in The New York Times — a newspaper that Trump is known to obsessively read, however much he says he reviles it.