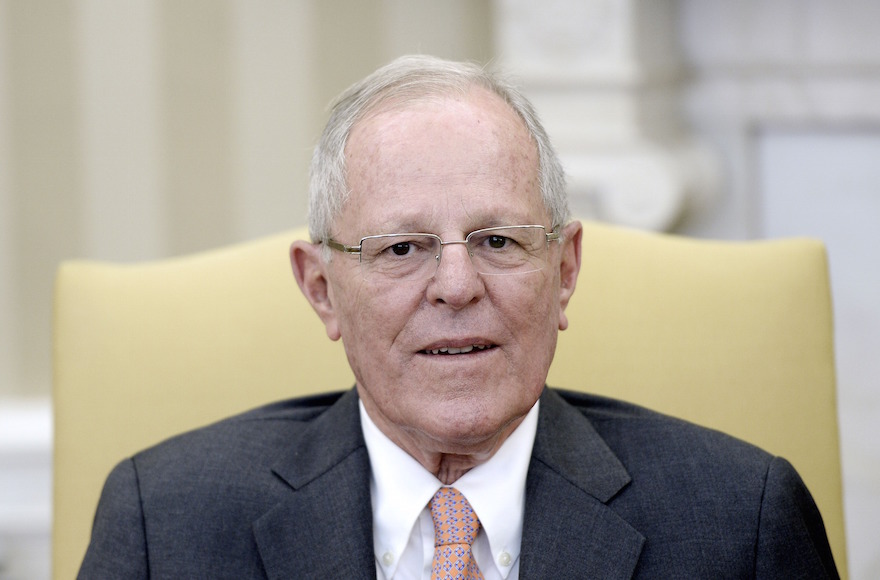 WASHINGTON, DC - FEBRUARY 24: (AFP OUT) President Pedro Pablo Kuczynski of Peru looks on during a meeting with U.S. President Donald Trump (not pictured) in the Oval Office of the White House on February 24, 2017 in Washington, DC. (Photo by Olivier Douliery - Pool/Getty Images)
Advertisement

RIO DE JANEIRO (JTA) — Peru’s president, whose father was a Jewish refugee who fled the Nazis, offered his resignation a day after the release of videos that showed key allies trying to buy the support of opposition lawmakers.

Pedro Pablo Kuczynski, 79, spent months fighting off attempts to oust him and had vowed not to resign. But he faced an impeachment trial set for Thursday, which he appeared likely to lose, and the release of the videos made his decision inevitable.

“I don’t want to be an obstacle for our nation as it finds the path to unity and harmony that it needs so much,” Kuczynski said Wednesday in a televised statement on the grounds of the presidential palace.

Born in Lima to a French Protestant mother and German Jewish father who fled Nazi Europe in 1933, Kuczynski was elected president of the Latin American country less than two years ago.

Late last year, after he had been accused of wrongdoing in an international graft scandal involving construction contracts, Kuczynski pardoned former President Alberto Fujimori, who had been convicted of human rights violations. The pardon appeared to be part of a deal with one of Fujimori’s sons, a congressman who controlled enough votes to save Kuczynski from being removed from office at the time.

The secretly recorded tapes, which appeared to show allies of Kuczynski soliciting support with offers of big rewards to lawmakers, prompted his resignation decision. It is still unclear whether the Peruvian Congress will decide to accept Kuczynski’s resignation or choose to impeach him anyway.

The U.S.-educated former Wall Street banker, who renounced his American citizenship to run for Peru’s presidency, took a strong stand against President Donald Trump’s “America First” agenda while many in the region remained silent.

Peru’s former president, Alan Garcia, once slammed Kuczynski for not having “a single gram of Peruvian blood. He has Polish, Jewish, French, but Peruvian, zero.”

He held positions at both the World Bank and the International Monetary Fund before being designated as general manager of Peru’s Central Reserve Bank. He later served as minister of energy and mines in the early 1980s, and minister of economy and finance before he became prime minister.