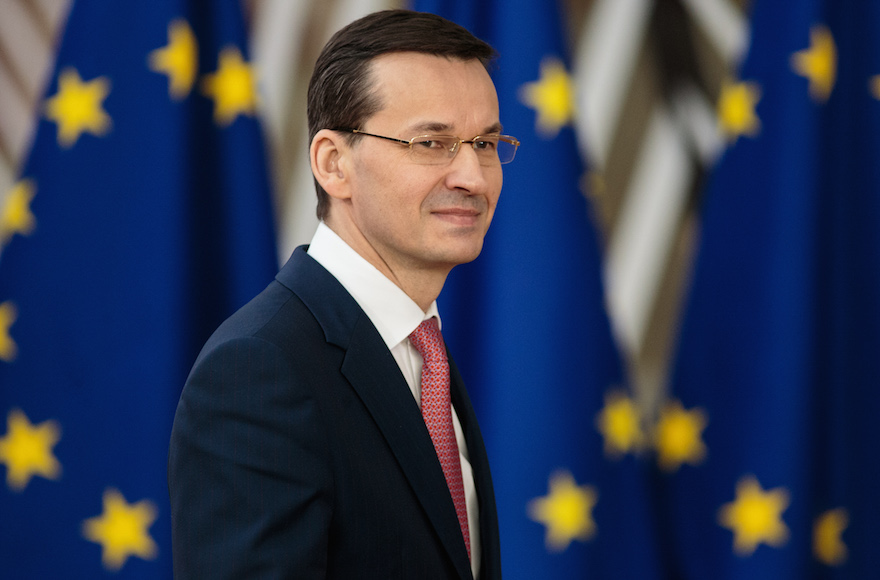 (JTA) — Fifty-nine U.S. senators have co-signed a bipartisan letter urging Poland to amend draft legislation on a restitution bill that they say discriminates against survivors living in America.

The letter sent Monday to Prime Minister Mateusz Morawiecki concerns a measure from October that would require claimants to be citizens living in Poland and excludes all heirs except “first-line heirs,” meaning spouses, children or grandchildren.

“We are deeply concerned that the bill, in its current form, would discriminate against virtually all American survivors and heirs on the basis that they are not currently citizens of Poland and that they were not residents of Poland when their property was nationalized,” the letter says.

The letter comes amid a crisis in Israel’s relations with Poland over the enactment last month of a law that criminalizes blaming Poland for Nazi crimes. Jewish groups, which said the law prevents debate and research into the actions of thousands of Poles who collaborated with the Nazis, also harshly criticized Poland.

According to the Polish media, the country’s most senior leaders are not welcome at the White House because of the legislation.

The World Jewish Restitution Organization welcomed what its chair of operations, Gideon Taylor, called the senators’ “call for justice for Holocaust survivors and their families.” With fewer and fewer Holocaust survivors alive today, “we call on Poland urgently to address this historic wrong,” Taylor said in a statement and thanked the lawmakers.

Noting the part about the first-line heirs, the letters says the provision “would disproportionately impact Jewish victims and their families.”

Israel’s ambassador to Poland, Anna Azari, also complained about discrimination in the bill in a rare move by her Foreign Ministry. Israel usually refrains from speaking out publicly about restitution issues.

In their letter, the senators also tied the legislation to the future of U.S.-Poland relations.

“We urge you to work with the Polish Parliament to pass fair and just restitution legislation that would both fully realize the goals of the Terezin Declaration and further strengthen the bond between our countries,” they wrote.

Restitution experts estimate that following the Holocaust, Jewish individuals and institutions in Poland lost property with a combined value exceeding $1 billion. Poland does not have laws for restitution for privately owned property. It passed a law on communal property in 1997 and has returned some of it, but thousands of claims in that category have gone unaddressed.

About 90 percent of over 3 million Polish Jews were killed in the Holocaust.