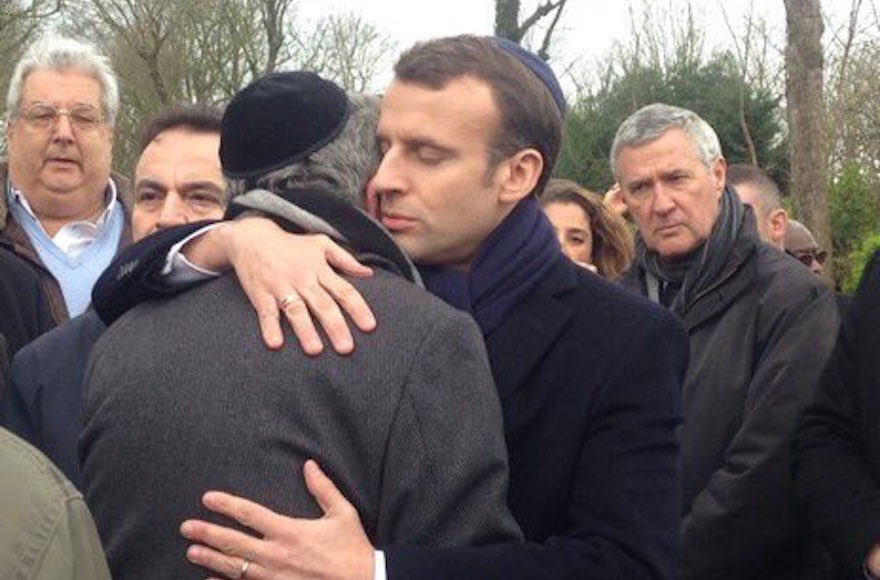 (JTA) – French President Emmanuel Macron attended the funeral for a Holocaust survivor who allegedly was murdered by her Muslim neighbor.

At the ceremony on Wednesday in the Paris suburb of Bagneux, Macron said Mireille Knoll, 85, was killed because she was Jewish.

Knoll’s attacker “murdered an innocent and vulnerable woman because she was Jewish, and in doing so profaned our sacred values and our history,” he said.

The president was seen wearing a kippah and talking with Knoll’s relatives and friends.

Macron had also commented about the March 23 slaying on Twitter, calling it “appalling.”

“I am deeply affected by the appalling crime committed against Mrs. Knoll. I reaffirm my resolute determination to fight against anti-Semitism,” he wrote.

Knoll’s torched body was found with 11 stab wounds inside her apartment.

Prosecutors on Monday indicted two defendants, including one of her neighbors, in connection with what is being tried as a murder with aggravated circumstances of a hate crime. They are also charged with robbery.

On Wednesday, hundreds of French Jews and non-Jews are scheduled to attend a silent march in her memory in Paris.

Sammy Ghozlan, founder of the National Bureau of Vigilance Against Anti-Semitism, or BNVCA, told JTA on Tuesday that “authorities on the national level acted swiftly and correctly” in dealing with the investigation. He said it was “a lesson learned” from the handling of the slaying last year of another Jewish woman, Sarah Halimi.

In April, BNVCA and the CRIF federation of French Jewish communities were among several French Jewish organizations that protested the omission of hate crime charges from the draft indictment of a Muslim man who confessed to killing Halimi, a 66-year-old physician, in her apartment.

The defendant, Kobili Traore, was heard calling Halimi, his neighbor, “a demon.” Halimi’s daughter said he had called the daughter a “dirty Jew” two years before he pummeled her mother in her apartment for over 30 minutes and threw Sarah Halimi to her death from her three-story home.

CRIF called the omission of hate crime charges a “cover-up.” They were finally included in a revised indictment following weeks of vocal lobbying by Jewish groups.

The controversy was among several similar cases in recent years, including a case last month in which a judge scrapped hate crime charges from the indictment of Arab youths who allegedly assaulted a Jewish teenager and took his kippah.

A similar exchange occurred after French prosecutors last year dropped hate crime charges in the case of four men suspected of rape and robbery at a suburban Paris home they acknowledged was targeted because it belonged to Jews. Following protests, the aggravated element also was added to their indictment.