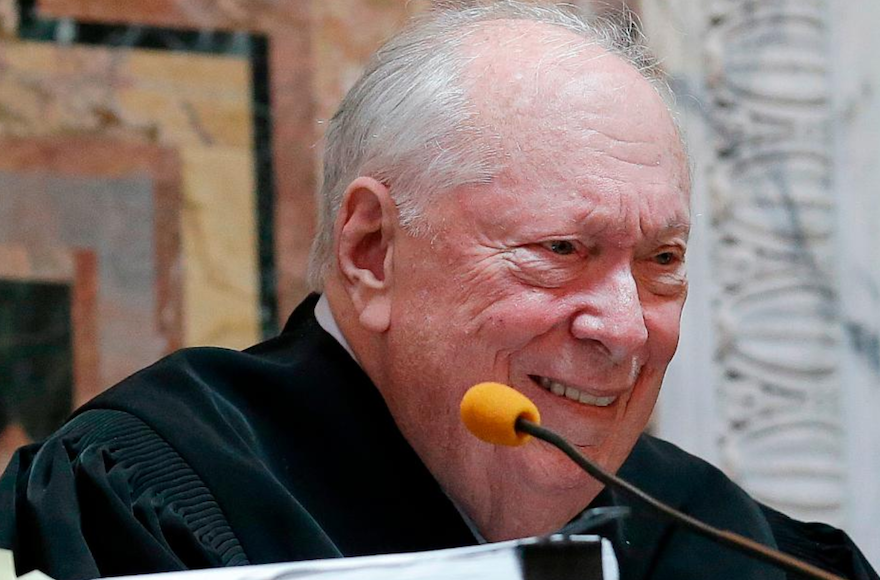 LOS ANGELES (JTA) – Judge Stephen Reinhardt, dubbed the “liberal lion” of American jurisprudence and an outspoken advocate on Jewish as well as legal issues, has died at 87.

Reindhardt died of a heart attack during a visit Thursday to a Los Angeles dermatologist, according to a spokesman for the U.S. 9th Circuit of Appeals, on which Reinhardt served from his 1980 appointment by President Jimmy Carter until his death.

“Reinhardt was deeply principled, fiercely passionate about the law and fearless in his decisions,” Chief Judge Sidney  Thomas of the 9th Circuit — whose jurisdiction includes the Western United States, Alaska and Hawaii –- told the Los Angeles Times. “He will be remembered as one of the giants of the federal bench.”

His rulings were frequently overturned by a more conservative U.S. Supreme Court, to which Reinhardt responded that he was not about to help the Supreme Court take away the rights of citizens.

Among his more controversial decisions was that the words “under God” in the Pledge of Allegiance were unconstitutional, as were bans on same-sex marriage and physician-assisted suicide.

Reinhardt was born in New York as Stephen Shapiro, but changed his name when his mother divorced his father and married Gottfried Reinhardt, a screenwriter, director and producer (“The Red Badge of Courage,” “Town Without Pity”) who introduced the boy to the Hollywood community.

Stephen Reinhardt’s even more famous grandfather was Max Reinhardt, who revolutionized the German stage and then created Hollywood Bowl spectacles after fleeing Hitler.

The trauma of those days also deeply affected Stephen Reinhardt, and he spoke passionately about Jewish issues.

His first wife, Maureen Kindel, told Citizen Magazine in an interview that her husband “thinks about his Jewish heritage a lot, very much so. He also thinks about the discrimination against Jews that he suffered when he was younger. I’m sure that has formulated his views about being protective of people’s rights.”

In 1990, in an address to the City Club of Los Angeles that was labeled “provocative” by the media, Reinhardt maintained that Jews were drastically underrepresented on the U.S. Supreme Court, adding that if some were added, “the result would be a better, kinder and gentler nation.”

According to the Times, Reinhardt was close to former 9th Circuit Judge Alex Kozinski, a conservative. Kozinski retired under pressure in December in response to a sexual harassment allegation.

Reinhardt is survived by his wife, Ramona Ripton, the longtime former head of the American Civil Liberties Union of Southern California; three adult children — Mark, a political science professor; Justin, a musician; and Dana, a novelist — and seven grandchildren.