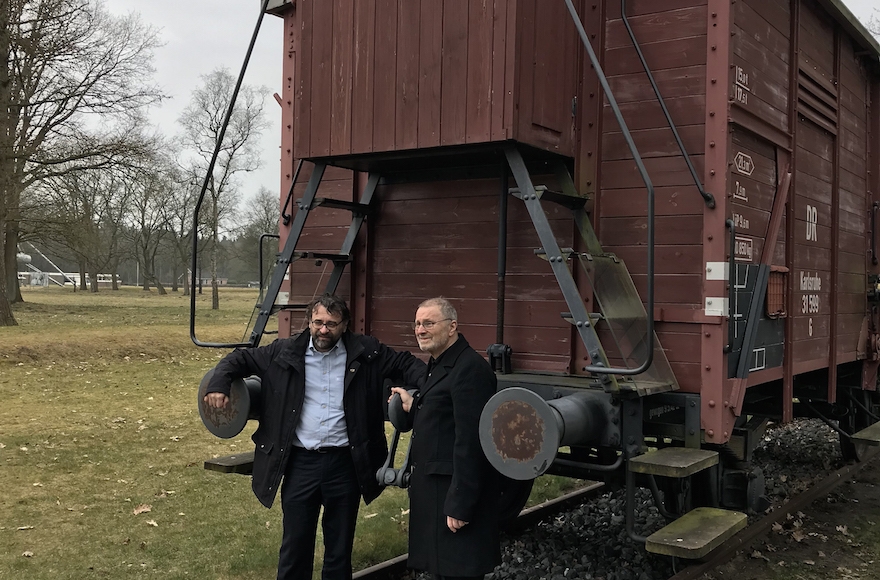 WESTERBORK, Netherlands (JTA) — On a foggy Sunday, cheerful cabaret music pierces the silence that hangs over this former concentration camp, one of the largest facilities of its kind in Nazi-occupied Western Europe.

Blasting from the recorder of an Israeli visitor last month, the music draws disapproving looks and remarks from several locals touring the grounds in respectful silence. They find the sound of music inappropriate at a place whose name in the Netherlands is synonymous with wholesale murder.

But to the visitor and his five Jewish companions, Westerbork is perhaps the most appropriate place in the world to play these tunes. After all, the upbeat music was composed and performed here by inmates of the camp before the Nazis shipped them to their deaths at Auschwitz.

Those inmates include Max Ehrlich, a celebrated German comedian in the 1930s who settled in Holland and was sent to Westerbork after Germany invaded in 1940.

On March 25, his nephew Alan Ehrlich, an amateur historian of the Holocaust, led a tour of the camp for an international delegation that also included a musicologist and three journalists.

The visit is part of a unique project spearheaded by the Jewish National Fund in the United Kingdom that is breathing life into musical works that were written during the Holocaust and almost lost forever — and in the case of Max Ehrlich’s work, reconstructing compositions based on texts he smuggled out of the camp.

“Notes of Hope” features performances in Israel by the Ashdod Symphony Orchestra together with young musicians from Israel’s south. Culminating around Israel’s Holocaust Remembrance Day this month, the project offers another way to teach about the Holocaust as the number of eyewitnesses dwindles, said Samuel Hayek, chairman of JNF-UK. 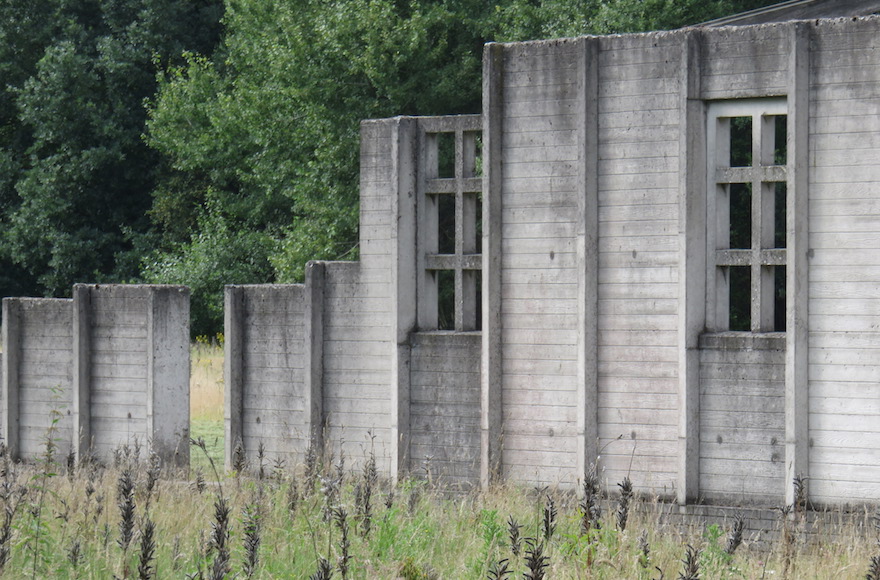 A view of the former Westerbork camp near Amsterdam, from which tens of thousands of Jews were deported from Holland to Nazi death camps. (Wikimedia Commons)

But to Alan Ehrlich, the reconstruction of his uncle’s works 75 years after their creation carries more than symbolic significance, he says during the visit to Westerbork, where he listens to those compositions playing from the recorder.

“Above all, it’s a historic document that tells of the great determination to survive by prisoners who would do anything, whatever it took, to stay alive,” he says.

In the case of Max Ehrlich, trying to survive meant producing with the Westerbork theater group of approximately 20 prisoners the most entertaining, wittiest and glitziest productions possible.

Ehrlich ultimately was deported to Auschwitz and murdered. But before that, his lives and that of his crew depended on their stagecraft. The camp’s Nazi commander, Albert Konrad Gemmeker, was “stagestruck,” as Alan Ehrlich describes it. Serving as a warden in a prison in a remote corner of the Netherlands, he was probably starving for the music and entertainment to which he was accustomed in Germany.

Like Max Ehrlich, other German Jewish artists fled Nazi Germany for Holland, including his fellow composer Willy Rosen. When Germany invaded, “Gemmeker suddenly found himself running a camp that had star inmates, a Hollywood cast at his disposal,” says Alan Ehrlich, a New York native who lives with his wife and two children in Switzerland.

For months, Gemmeker kept the names of his theater group off the weekly transport lists of people who were to be murdered in Auschwitz, Sobibor and other extermination camps in the east.

“At the height of the Westerbork Theater Group, they had a full production crew, lighting technicians and all,” Ehrlich says. “The lives of the people in that crew depended on their ability to put on a good show.”

Gemmeker would invite his buddies from other SS units to show off his Jewish theater, according to research by Ehrlich and Katja Zaich, who wrote her doctoral thesis, titled “I Urgently Request a Happy Ending,” about German Jewish theater productions by exiles in the Netherlands. The Nazi spectators would occupy the two front rows of a theater that was constructed especially for cultural events at Westerbork.

But Max Ehrlich, an eternal optimist who knew he wanted to be a performing artist from a very young age, nevertheless recognized that Gemmeker would grow tired of the distraction he and his crew provided.

“He sensed, he was aware of a big unrest among the people in Westerbork,” Ehrlich says. “People were shipped every week on trains east never to be heard of again.”

Aware that memories of the performances would be erased along with their creators and performers, Max Ehrlich approached a non-inmate who paid a rare visit by an outsider to the camp. He asked the visitor — a relative of a prisoner whom Ehrlich knew — to smuggle out some lyrics, notes and scripts. Decades later, the works were found in a Dutch attic and were given to Alan Ehrlich, who donated them to a Dutch museum.

“I was deeply moved. I had works my uncle wrote in his last days before he was sent to his death,” Ehrlich says. 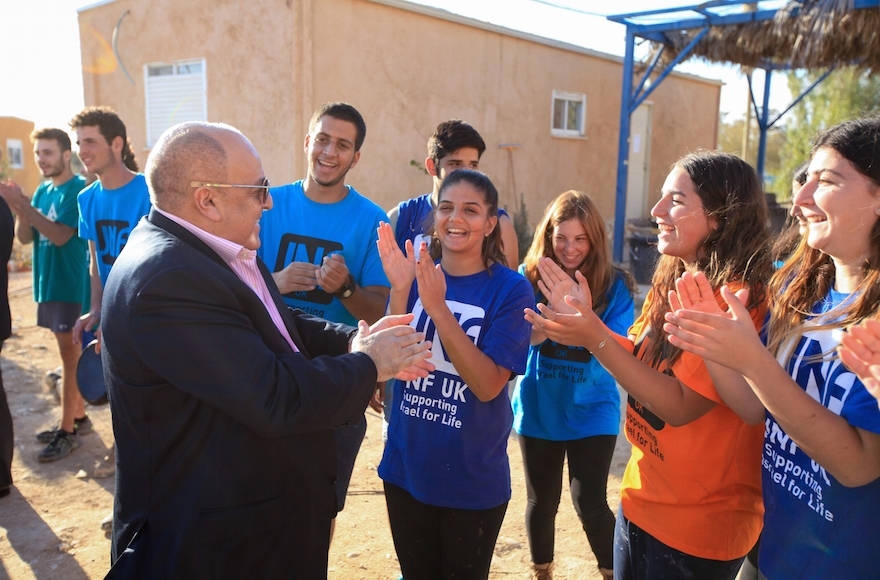 His father, Max’s brother, was a cinema owner who immigrated to the United States when Max Ehrlich went to Holland. Ehrlich says that his father’s greatest regret in life was not being able to arrange a visa for Max.

“I wanted to at least bring Max Ehrlich’s last works to light as a tribute to my father, who died in 2008,” Ehrlich says.

But the discovered documents contained no musical score or any other indication of a melody. Ehrlich, Zaich and Francesco Lotoro, a Jewish musicologist from Italy who specializes in works written during the Holocaust, went about reconstructing the music. They recorded Westerbork survivors who either saw the performances or participated in their production. They struck gold with Louis de Wijze, a survivor who delivered an accurate rendition of several numbers and even funded a studio recording of the tunes.

One is titled “Tatata,” a jaunty song in German composed by Max Ehrlich and Rosen. It describes an experience of a camp resident whose life is punctuated by the “sound of gramophone and saxophone.” Another, “You Already Want Someone Else,” is a jilted spouse’s lament. Given the circumstances in which it was written, it may well have referred to the life that the inmates were forced to leave behind.

Max Ehrlich’s songs are only a part of the repertoire of Holocaust-era works that the Ashdod Symphony Orchestra will perform on April 15, three days after this year’s Holocaust Remembrance Day, or Yom Hashoah. Many of the works were reconstructed by Lotoro and will be performed for the first time since the genocide.

To some observers today, the creation of art under the threat of annihilation is a triumph of humanism over barbarity. But to others, it’s the chilling result of behavior that borders on collaboration.

Etty Hillesum, a lawyer who wrote a diary during her imprisonment in Westerbork before her murder at Auschwitz, referred to the theater group in the diary as “buffoons” fulfilling a macabre mission for the Germans. She wrote that the performances were designed to inject a false sense of normalcy into the lives of people they sought to subdue in order to facilitate their murder.

Ehrlich is not quick to dismiss this allegation.

“Was it collaboration on the part of the Jews or was it resistance? It was something that, in the very beginning, troubled me a lot, too,” he says. “What is the morality of them having participated in these theater presentations?”

It’s a question he has raised in interviews with dozens of survivors, especially with those who participated in the Westerbork theater group.

The most pungent answer came from Louis de Wijze, the man who reconstructed Max Ehrlich’s tunes and survived Westerbork largely thanks to his superb skills at soccer.

To him, the morality debate is a moot point.

“You just do anything to survive,” he told Alan Ehrlich. “Under those circumstances, surviving is your only mission in life. Everything else is a side note.”