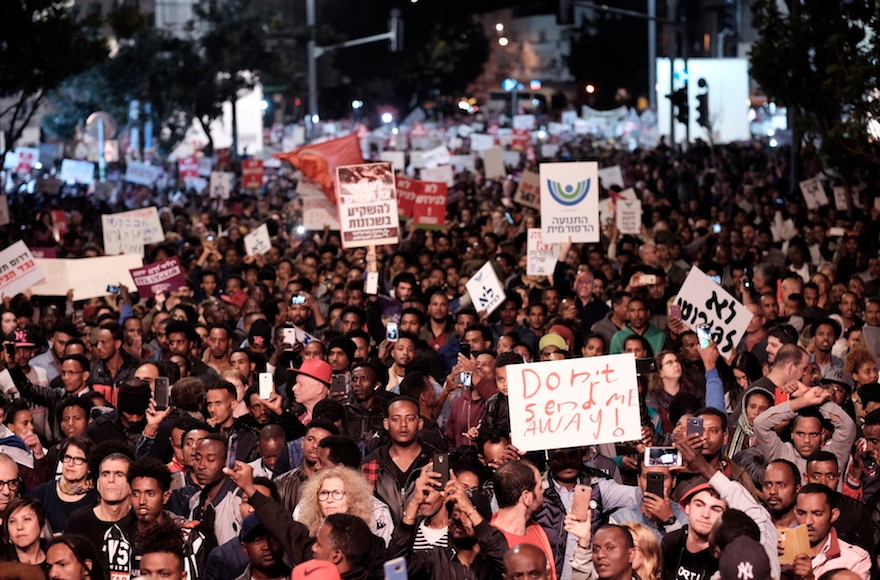 JERUSALEM (JTA) — Israel has reached an agreement with the United Nations that will see nearly half of the African asylum seekers it planned to deport go to Western countries.

The U.N. High Commission for Refugees has committed to finding places in Western nations for at least 16,250 of the African migrants from Eritrea and Sudan. In return, Israel will legalize the status of the remaining asylum seekers, the Prime Minister’s Office said in a statement.

As many as 39,000 illegal immigrants from Africa are living in Israel, about 5,000 of them children.

The new formula reportedly will take up to five years to implement, and will include a plan to improve the living conditions in southern Israel, as well as redistribute the African population throughout Israel.

The asylum seekers will go to countries such as Canada, Germany and Italy, as well as Scandinavian countries, Prime Minister Benjamin Netanyahu said Monday.

Israel had been scheduled to begin deporting the migrants next week under a plan and budget approved by the country’s Cabinet in January. The Supreme Court had frozen the deportations in mid-March after a petition filed by opponents, and had been waiting for the government to respond to the petition.

According to the government plan, migrants who had chosen to leave by March 31 would receive a payment of $3,500 as well as free airfare and other incentives.

The Prime Minister’s Office said in a statement that the original mass deportation plan was canceled “because of legal considerations and political difficulties on behalf of third-party countries.”

Attorney General Avichai Mandelblit has approved the new arrangement and it meets the standard of international law, according to the statement. The statement also said that the new plan means that more immigrants will leave the country than under the previous plan.