Dublin’s mayor was supposed to be kept out of Israel. Here’s how he got in. 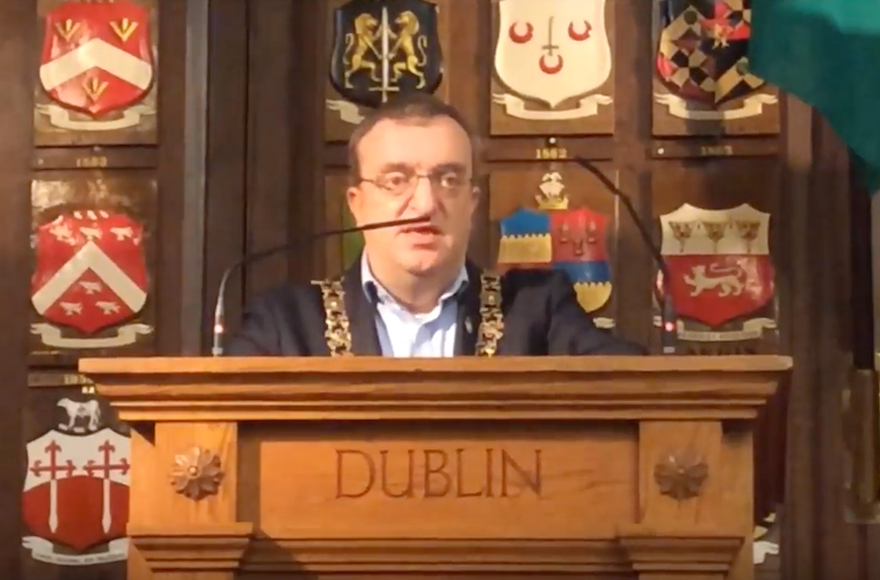 JERUSALEM (JTA) — The mayor of Dublin entered Israel despite instructions from the Israeli government that he be kept out due to his ties to a group that promotes boycotts of Israeli companies and firms that do business with Israel.

Mícheál Éamonn Mac Donncha, a member of the leftist Sinn Féin party, came into the country through Ben Gurion Airport on Tuesday night. He reported shortly after that he had traveled to the West Bank city of Ramallah, the seat of the Palestinian Authority government, at the invitation of the Palestinian Authority for a conference on the status of Jerusalem. Donncha is involved with the Ireland Palestine Solidarity Campaign, which appears on an Israeli government blacklist of groups that support BDS.

Interior Minister Aryeh Deri had instructed that Donncha be turned away, but claims the Ministry of Strategic Affairs misspelled his name in the document it gave to border control and thus the order to detain him did not show up on the border control computer.

A Ministry of Strategic Affairs official told Ynet that “the ministry gave the Population and Immigration Authority the Dublin mayor’s full and correct name as it is spelled on his official website.”

Deri told Ynet that “after the Dublin mayor leaves Israel and in light of his activity against the state, I have instructed authorities to hand him a letter banning him from entering Israeli territories in the future.”

A day before Donncha left for Israel, the Dublin City Council passed a nonbinding resolution to expel Israel’s ambassador to Ireland in response to the killing of Palestinians during the Gaza border demonstrations over the past two weeks.

“The city of Dublin adopted a shameful and ridiculous resolution, in the hateful spirit of Hamas and similar organizations,” said a statement issued by Israel’s Foreign Ministry. “It is utterly unacceptable that the capital city of a country which is a member of the European Union adopts a resolution that is entirely a boycott, hateful and racist. We expect a scathing Irish condemnation of this despicable resolution.”

Last year, the Dublin City Council voted to fly the Palestinian flag above City Hall in a show of support for Palestinian statehood and considered a boycott of companies doing business with Israel. Ireland is rumored to be ready to recognize a Palestinian state. It was the first European country to recognize the Palestine Liberation Organization and has traditionally been one of Israel’s harshest critics in the European Union.