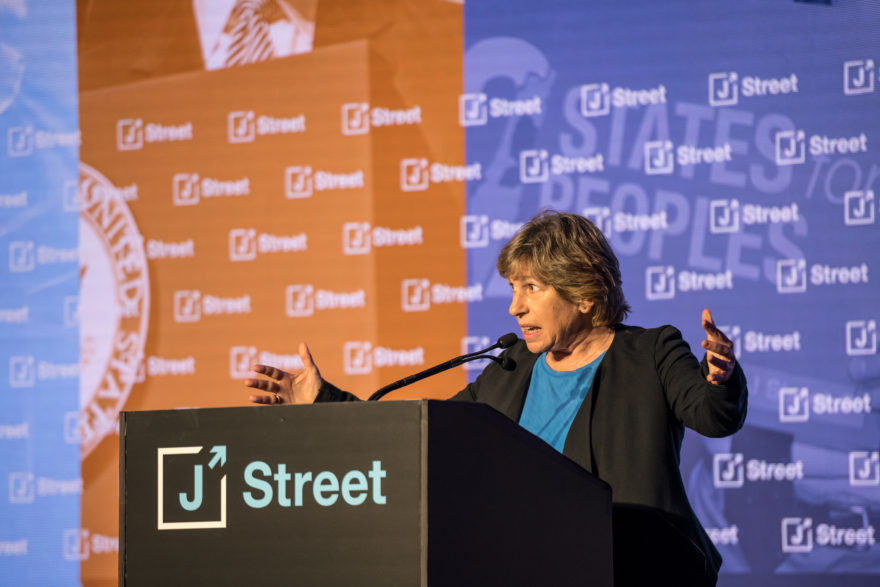 Randi Weingarten, the president of the American Federation of Teachers, speaks on April 14 2018 at the annual J Street conference in Washington DC. (J Street)
Advertisement

WASHINGTON (JTA) — J Street, the liberal Jewish Middle East lobby, launched its 10th anniversary conference with repeated and unflattering comparisons of the two leaders of the countries it straddles, Israel and the United States.

“All across the globe liberal democracy is in retreat,” Jeremy Ben Ami, J Street’s president, said Saturday as the conference opened. “J Street proudly opposes these trends, and we couldn’t be clearer in the threat President Trump and Prime Minister Netanyahu pose.”

Beyond the fiery rhetoric, the conference reflected the anxieties of a group — and a larger leftist movement — that is seeking means of influence while conservatives control, for now, all the levers of power in the United States and Israel.

‘We are here to call out — and to change — a right-wing, populist government, with a leader who thrives on hatred and division, who mocks and attacks the press, and who sees the strangers among us as a danger to be feared and mistreated, not as fellow humans,” said keynote speaker Randi Weingarten, the president of the American Federation of Teachers.

“Hmm…about which country am I speaking?” she continued, to laughter. “The truth is that Israel beat us to it, with a right-wing leadership years before we had Donald Trump, before right-wing populists captured leadership in Europe, but here we are—the similarities are abundant.”

The abatement of J Street’s status seemed palpable: J Street, influential enough during the Obama administration to require the massive Washington Convention Center, was holding this year’s conference at a hotel. (Organizers said the hotel was booked just prior to Trump’s election.) Over 3,000 activists were in attendance this year.

J Street was instrumental in 2015 in helping to pass the Iran nuclear deal. Trump appears ready to dismantle it next month. J Street’s operating credo when it was established in 2008 was to advance the two-state solution; Trump and Netanyahu have both retreated from commitment to a two-state outcome.

The unfavorable comparisons of Netanyahu to Trump and vice versa included allegations that each leader undercuts democratic norms by marginalizing dissent, delegitimizing media and demonizing immigrants.

“In both countries we see the same contempt for civil rights, racism, xenophobia, politics of fear starting at the highest levels of government,” said Tamar Zandberg, the new head of the opposition Meretz Party in the Knesset. She excoriated Netanyahu and Trump for forming alliances with the European far right, where expressions of anti-Semitism still proliferate.

There also were multiple references to Netanyahu’s recent broadsides against the New Israel Fund, the umbrella fundraiser for a number of civil society groups, which Netanyahu blames for efforts to thwart his plan to deport tens of thousands of African asylum seekers in Israel.

The unity of purpose in facing down Trump and Netanyahu did not entirely paper over substantial differences. A panel on Sunday morning on combating the boycott, divestment and sanctions movement featured at time fraught exchanges over whether the BDS movement deserved opposing. (J Street, as an organization, opposes BDS.)

Weingarten noted the difficulties of grappling with a far left that opposes Israel’s existence. She praised J Street for persisting “even while the rest of the world ignores your work, even sometimes our progressive allies condemn you.”

Zandberg offered unqualified praise to the United States, Britain and France for launching missile attacks over the weekend on targets in Syria believed to be the origin of chemical weapon attacks on civilians. Ben Ami said there was a need to stop the Assad regime in Syria, but said Trump needed to seek congressional approval for his actions.

Zandberg also decried the likelihood that Trump will kill the Iran deal, which swaps sanctions relief for a rollback in Iran’s nuclear program. (Trump says the deal is fatally flawed, and is to Iran’s advantage.)

But she added a component no one else mentioned: Iran, which is helping to prop up the Assad regime, must under no circumstance remain in Syria.

“We cannot accept the military presence of Iran, the only country in the world that threatens to destroy Israel, on our northern border,” she said.