Romania has no plans to move its embassy to Jerusalem, president says 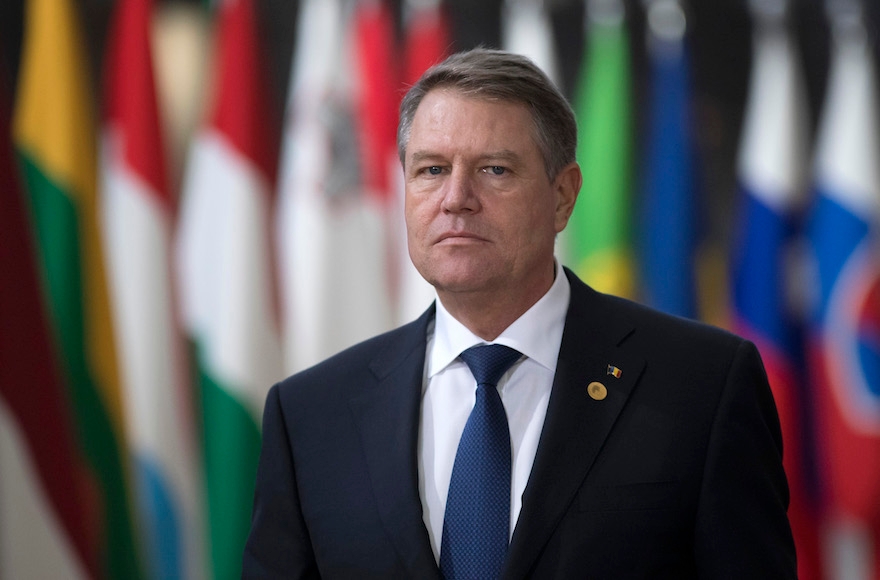 (JTA) — The president of Romania dismissed claims by a senior lawmaker in Bucharest who said his country would be the first European Union member state to move its embassy in Israel to Jerusalem.

On Friday, President Klaus Iohannis denied the veracity of assertions made the previous day by Liviu Dragnea, president of the Chamber of Deputies, the lower house of the parliament. The president has the final word on foreign policy issues.

“The President, as the maker of foreign policy decisions in Romania and as representative of Romania abroad in accordance with the constitutional provisions, reiterates that the constant position of our country regarding the Middle East Peace Process remains unchanged,” a statement by Iohannis’ office read.

Romanian officials officials have said repeatedly that the country’s position on the Israeli-Palestinian conflict is identical to that of the European Union, of which it is a member. EU officials said the bloc will recognize Jerusalem as Israel’s capital only following a mutually agreed-upon peace deal between Israel and the Palestinians, who also claim Jerusalem as their capital in a future state.

In an interview for the Antena 3 television channel Thursday, Dragnea said “The government has adopted a memorandum that decides to begin the procedures for moving the embassy” in Israel to Jerusalem.

This “has huge symbolic value for a state that has a tremendous influence in the world, with over 500,000 Romanians living in it, and is deeply valued by the U.S. administration,” he said.

But neither the Romanian Foreign Ministry nor the office of Prime Minister Viorica Dăncilă confirmed the initiation of any such procedures, according to the French news agency AFP.

In December, the president of the Czech Republic, Milos Zeman, said he supported the U.S. recognition of Jerusalem as Israel’s capital earlier that month and said Prague may follow suit, diverging with the position of his country’s Foreign Ministry.

However, his country’s Foreign Ministry said in a statement that “the Czech Republic together with other EU member states, following the EU Foreign Affairs Council Conclusions, considers Jerusalem to be the future capital of both states, meaning the State of Israel and the future State of Palestine. The Ministry can start considering moving of the Czech embassy from Tel Aviv to Jerusalem only based on results of negotiations with key partners in the region and in the world.”