Hurricane Harvey destroyed our synagogue. Here’s how we’re moving on. 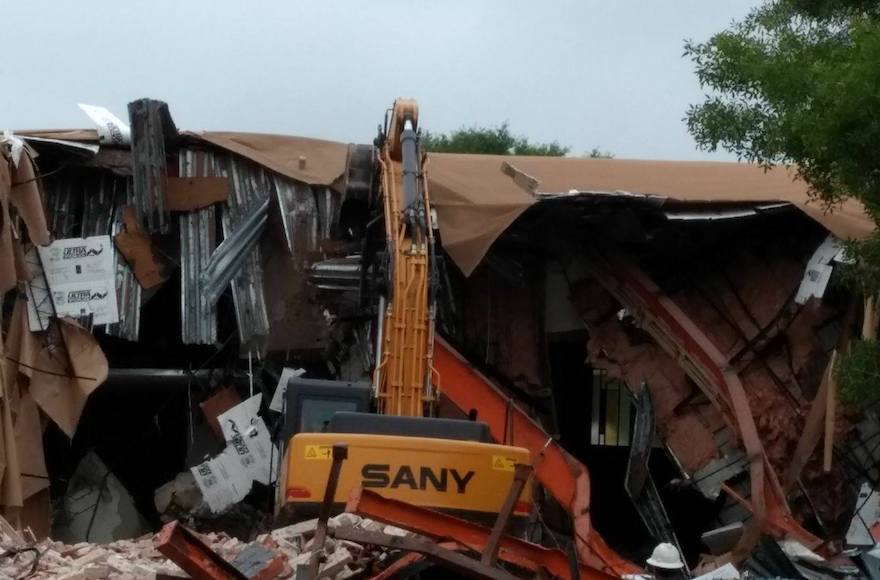 HOUSTON (JTA) — Over a four-day period at the end of August, Hurricane Harvey drenched this city with over 50 inches of rain, inflicting $125 billion in damages.

The result of the flooding was especially devastating for the tight-knit and geographically close Jewish community of Houston. Seven major Jewish institutions have been severely impacted by Harvey, and an estimated 2,000 Jewish families were affected by the floodwaters.

United Orthodox Synagogues was particularly hard hit, as approximately one-third of our member households was damaged by the flood. The waters also destroyed our beautiful sanctuary, and ruined our daily and High Holidays prayer books as well as our extensive Judaica library.

Our current building has been the home of our merged congregation since 1960. Harvey was only the latest in a series of floods, including in 2015 and 2016. As I write these words, the main sanctuary, executive wing and classrooms are being demolished. A room that holds memories of so many happy occasions has become a place of tears.

We recently held a “farewell” to the building and joined together one last time in our beautiful sanctuary for morning services. It was a morning of mixed emotions as many spoke about memories of growing up in our synagogues. Others spoke about the “end of an era,” while others sat alone in small groups or alone and just cried.

Many were relieved to know that the monumental stained glass mural that served as a dramatic backdrop to our bimah was going to be removed and safely stored away. We all hope to see it incorporated somehow in the new sanctuary.

I shared some thoughts with the congregation:

These walls brought together three different congregations and ultimately combined them into one united synagogue. The seats of this sanctuary cradled generations of families … grandparents, parents and their children, who came to pray here, to cry here and to rejoice here.

These walls have absorbed the sounds of our prayers and the wisdom of our Torah. This room has been the setting where we offered thanksgiving for our greatest triumphs and called out to God in turbulent times.

We have expressed our greatest hopes and dreams here.

Echoing off the walls of this holy chamber is the lifetime of our community … the multigenerational and diverse sounds that can only be created by a community like ours.

So many of us have seen our kids graduate from UOSGMS [the local Jewish Montessori preschool/kindergarten program] and RMBA [Robert M. Beren Academy, our Modern Orthodox day school] on our bimah. And how many hundreds and hundreds of lollipops have been distributed up there … reminding our kids that Torah, shul and community are the sweetest treats they will ever get.

Yet there was also hope in the room that day. While it is simplistic and often insensitive to say things like “it’s just a building” or “it’s just stuff,” the community is resolute in believing that its strength derives from our members. 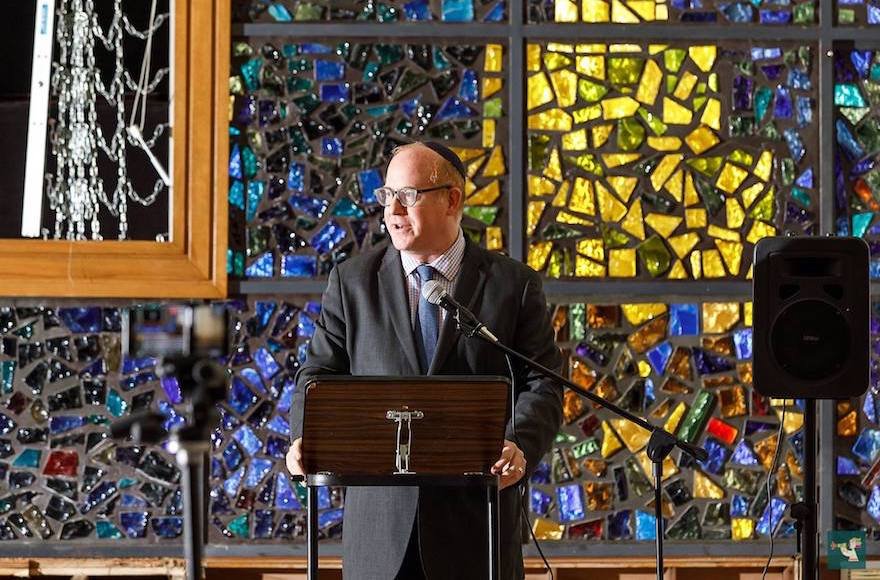 Barry Gelman, rabbi of United Orthodox Synagogues of Houston, speaking at a “farewell” to the building, which was later demolished after suffering extensive damage in Hurricane Harvey, Feb. 4, 2018. (Amalya Shandelman, courtesy of UOS)

We are facing a choice of how to rebuild our synagogue and where exactly in the neighborhood it will be. These are important questions, even as we know that we are each others’ most important resource. For now we will hold services and events in Freedman Hall, a nearby building that has the advantage of being elevated.

Since the flood, our community has seen its prayer books and library replaced, and funds have been raised to help our families recover from the devastation. The outpouring of concern, expressed by hundreds of volunteers coming to our neighborhood to help and provide food for flooded families for a full month after the hurricane, have been nothing short of extraordinary.

One of the most astonishing aspects of our recovery, however, is how flooded families have been helping each other.

Despite individual suffering and anguish, members of our community have continued to reach out to others. It is so easy (and understandable) for those suffering from loss to close in on themselves and focus only on their own challenges, of which there are many — economic, psychological, social. I have not seen that. I have seen the opposite.