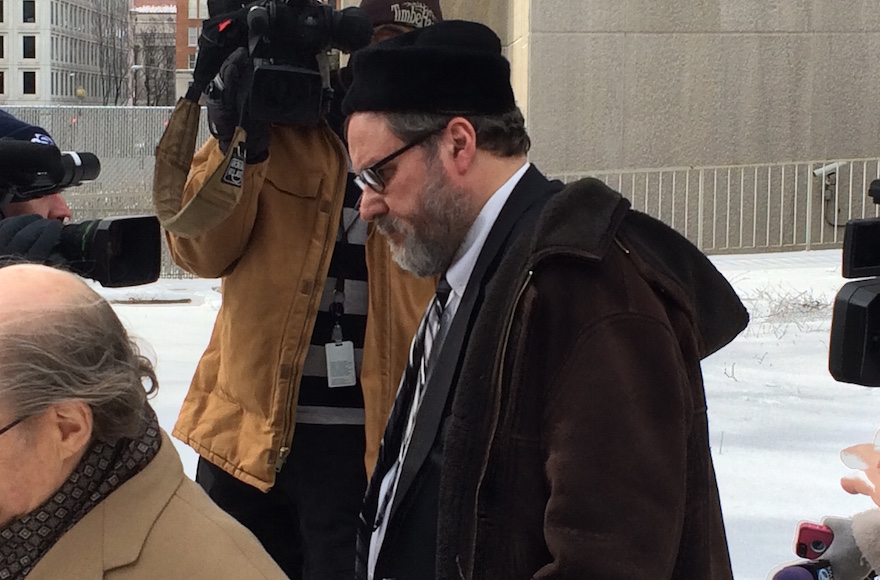 This item has been updated to reflect new information received from the District of Columbia’s Department of Corrections, correcting the date on which Rabbi Barry Freundel can expect to be released from prison.

(JTA) — Two victims of Rabbi Barry Freundel, a once-prominent Modern Orthodox rabbi in Washington, D.C., now in jail for secretly videotaping women in his synagogue’s mikvah, said they received notices that he will be released before the end of his six-and-a-half year sentence.

In a tweet Wednesday, Bethany Mandel called the automated email from the Washington Corrections Department “a nice punch in the gut.”

“He got 6.5 years three years ago, and we were promised repeatedly there was no possibility of early release,” Mandel posted. “This is not how I expected to be using my mental energy today. Nor do I appreciate this being thrown at victims via an automated notification system.”

Mandel initially cited an alert from the D.C. Department of Corrections saying Freundel would be released on Aug. 21, of this year. On Thursday afternoon the D.O.C. sent out another notification saying he would not be released until Aug. 21, 2020, one year earlier than his original sentence.

Freundel’s lawyer, Jeffrey Harris, and the D.O.C. did not return requests for comment by JTA.

Lauren Landau posted a screenshot of the first automated email, which states that Freundel will be released on Aug. 21.

“Barry Freundel was supposed to get out in 2021. … So anyway, how’s your Wednesday going,” she tweeted.

She also tweeted: “The nice thing about knowing your abuser is in jail, is every time you *think* you see him, you can shake it off. That peace of mind ends when his sentence does.”

Barry Freundel was supposed to get out in 2021.

Freundel, 66, who began serving his sentence in May 2015, was sentenced to 6 1/2 years in jail after pleading guilty to 52 counts of voyeurism, a charge that carries up to a year’s incarceration.

The sentencing judge had ordered Freundel to serve 45 days on each count, with the sentences to be served consecutively.

Prior to his arrest in 2014, Freundel was the longtime rabbi of Kesher Israel in the Georgetown section of Washington and an active member of the Rabbinical Council of America, an Orthodox rabbinic group.

Freundel is believed to have violated the privacy of at least 150 women, whom he filmed while they undressed and showered at the mikvah, or ritual bath, including members of his synagogue, candidates for conversion to Judaism and students at Towson University in Maryland, where Freundel taught classes on religion and ethics.