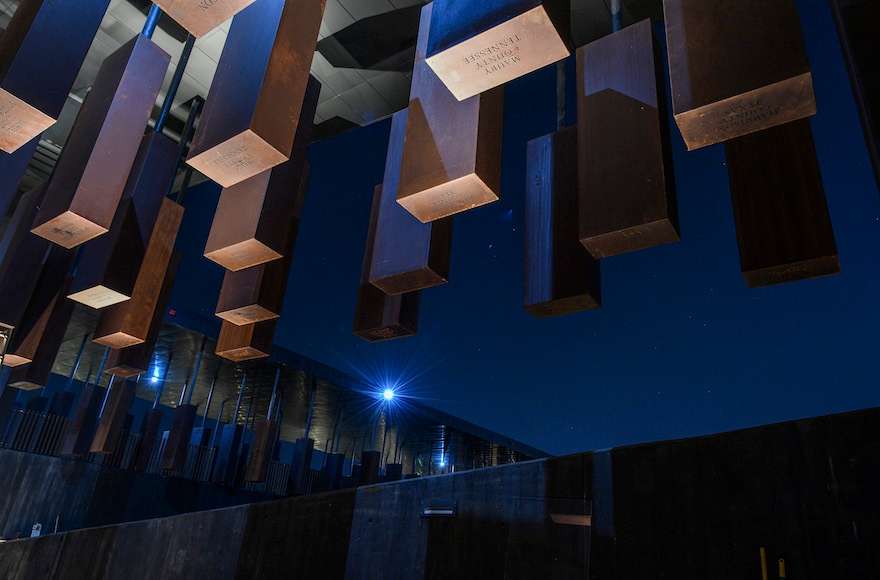 The names of lynching victims are inscribed on corten steel monuments at The National Memorial for Peace and Justice in Montgomery, Ala., seen on April 20, 2018. (Ricky Carioti/The Washington Post via Getty Images)
Advertisement

(JTA) — When Bryan Stevenson set out to build a memorial to the thousands of black people lynched in the United States, he thought about Germany and Poland.

Those countries, where millions of Jews died at the hands of the Nazis, have made sure to preserve the memories of the victims — and the places where they were killed. It’s inescapable when you walk the streets of Berlin, where “stumbling stones” bearing the names of murdered Jews protrude from the pavement. And it’s in stark view when you visit Auschwitz, the Nazi death camp in Poland that remains largely intact more than 70 years after it was liberated.

“In Berlin there are dozens of markers and stones placed next to the homes of Jewish families that were abducted,” Stevenson, founder of the Equal Justice Initiative in Montgomery, Alabama, told JTA in a 2016 phone interview. “Auschwitz is a place you visit. It sobers you with the horrors of the Holocaust. When you leave these places, you want to say, ‘Never again should we commit this kind of suffering and abuse.'”

Stevenson wanted to evoke the same feelings in Americans in the design for The National Memorial for Peace and Justice, which opened Thursday in Montgomery, the first physical space dedicated to the victims of slavery, lynching, segregation and mass incarceration. The memorial and nearby museum was spearheaded by Stevenson’s nonprofit, which provides legal aid to those wrongly convicted of crimes.

On a hill overlooking the State Capitol building, which once housed the government of the Confederacy, 800 steel columns are suspended in a massive shed  — one for each county where a lynching took place. A museum next door takes visitors through the history of American racism, from slavery to the present day. 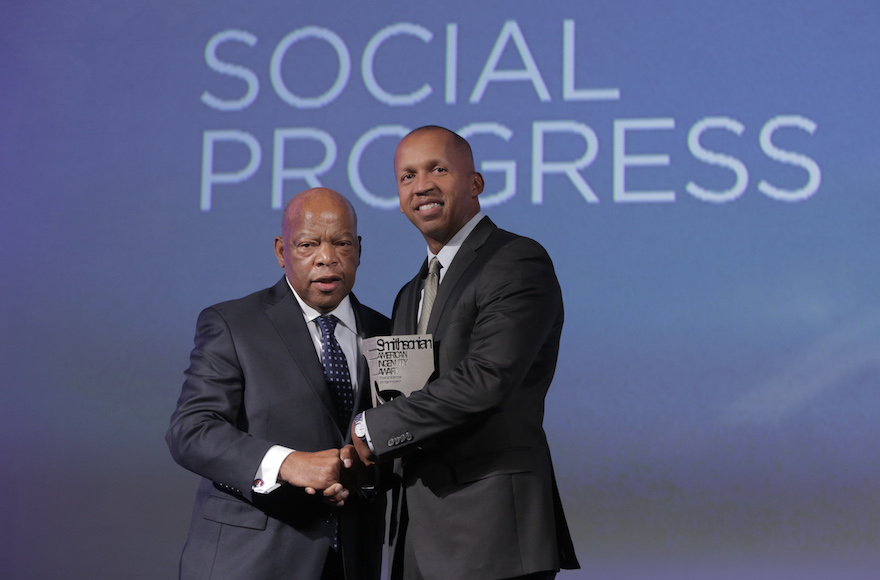 Nearly 4,400 people were victims of white supremacist lynchings between 1877 and 1950, according to original research by the Equal Justice Initiative — about 800 victims more than had been previously documented.

“When you come to the United States, the landscape is largely empty of any reckoning, any acknowledgement of the horrors of our history,” Stevenson told JTA. “There are virtually no places that deal honestly with the legacy of slavery. We tell a fictional story, a glorified story, a romantic story, about the era of the Confederacy.”

“The absence of any public acknowledgement of that history, I think, adds to the wound and the trauma,” he added. “The same can be said of the segregation era. We have not fully acknowledged the humiliation and damage that was done through the industry of segregation.”

The steel columns, hanging in rows above a descending slope, display the names of individual victims of lynching, with others bearing only the word “unknown” for victims who have not been identified. Summaries along the walk tell the stories behind some lynchings. Sculptures outside represent the anguish of black Americans terrorized by white supremacy.

The initiative also has duplicates of the columns ready to send as memorials to counties where the lynchings took place, provided the groups requesting them have made efforts to advance racial and economic justice. And in the museum, housed nearby in a former warehouse of a slave market, shelves hold jars filled with soil from the sites of lynchings.

Stevenson told The New York Times that he does not intend for the museum to be punitive. Rather, he hopes it will help “liberate America” from a racist history that has taken different forms over the years.

“I would not be comfortable traveling to Germany today as an African-American, knowing about that history, unless I knew German society had changed,” he told JTA. “We cannot expect people across the world to travel to the American South or feel comfortable in the American South until we reject this history of racial inequality.”

Germany, Stevenson said, was not the only country that has done a better job than the United States of confronting its sins. He pointed to the Kigali Genocide Memorial in Rwanda, which tells the story of that country’s genocide, its prelude and its aftermath through documents, photos, artifacts and video testimonies. He also praised the “cultural response” to apartheid in South Africa, which has its own museum about that era in Johannesburg.

“Collective shame about mass atrocities is a healthy thing because it moves you to get the point where you say ‘never again,'” Stevenson said. “We don’t say those words when it comes to the history of racial inequality.”