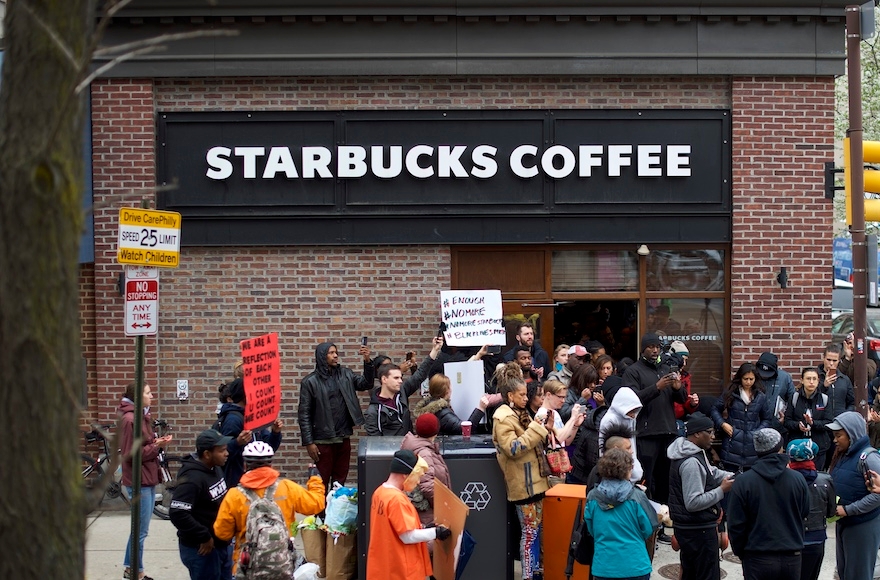 (JTA) — The Anti-Defamation League is no longer taking a leading role in next month’s diversity training at Starbucks stores across the United States, serving instead in an consulting role.

Initially, the group’s CEO, Jonathan Greenblatt, was one of four civil rights leaders tapped to develop the coffee giant’s all-day anti-bias training next month across its 8,000 U.S. locations. The training was announced following outrage at the arrest of two black men waiting to start a meeting at a Philadelphia Starbucks store.

The other three civil rights leaders — Sherrilyn Ifill of the NAACP’s Legal Defense Fund, Bryan Stevenson of the Equal Justice Initiative and Heather McGhee off the liberal think tank Demos — will still be leading the training.

But Starbucks announced in a Wednesday press release that the ADL will now be one of “a diverse array of organizations and civil rights experts” that Starbucks will consult. Other groups in the consulting role include those combating anti-Muslim, anti-LGBT and anti-Latino bigotry.

Starbucks did not specify why Greenblatt is no longer among the originally named experts, although Greenblatt noted in a tweet that the training will focus specifically on race. The three activists leading the training are all people of color. The ADL combats bigotry of all kinds, but focuses on fighting anti-Semitism.

Greenblatt appeared to react positively to the scaled back role. He tweeted that the ADL “will be there every step of the way” to assist Starbucks, and acknowledged that “this is an issue of race. And so we are ready to listen, learn &share our expertise+experience where we can.”

Humbled at prospect of working w/partners & pioneers @NAACP_LDF @eji_org @Demos_Org @civilrightsorg @WeAreUnidosUS @MuslimAdvocates etc. And yet we know, first & foremost, this is an issue of race. And so we are ready to listen, learn &share our expertise+experience where we can

Greenblatt’s original role was criticized by left wing activists who objected to, among other things, ADL’s work with police departments and its support of Israel. One of the most prominent critics was Tamika Mallory, one of the leaders of the Women’s March, whom the ADL has criticized for supporting Louis Farrakhan, a virulent anti-Semite.

One of the groups that had protested the ADL’s role was Jewish Voice for Peace, which advocates for a boycott of Israel. JVP, which has campaigned against an ADL program that brings American police officers to Israel for counter-terrorism training, praised Starbucks in a press release.

“The demotion of the ADL from a leadership role is a clear reflection of the recognition by a wide variety of social justice organizations and individuals that the ADL’s status as a civil rights organization is compromised given its history and practices of anti-Muslim, anti-Palestinian, and anti-Black racism,” Rebecca Vilkomerson, JVP’s executive director, said in the press release.

Much of their criticism is based on an allegation, which ADL and participants deny, that American police officers learn techniques in Israel that they use to abuse minority communities back home.