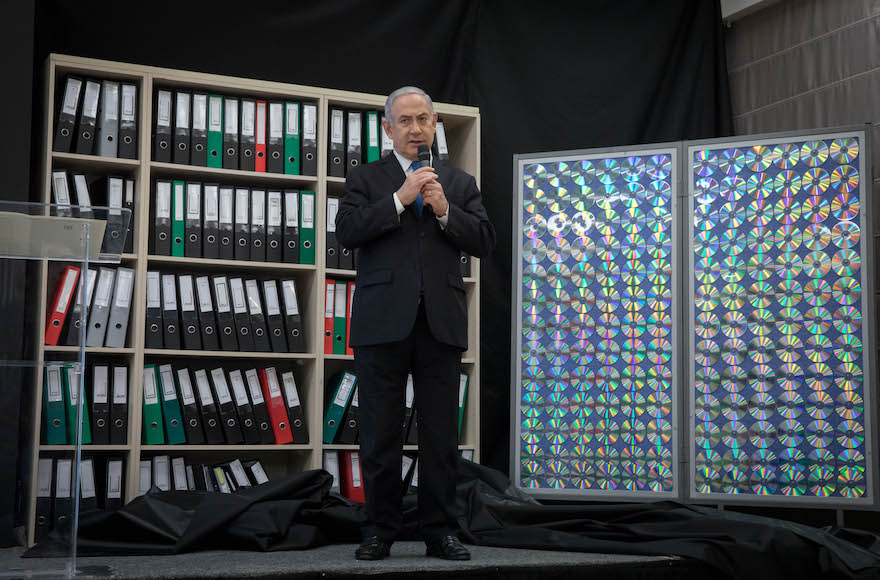 (JTA) — Israel’s Mossad intelligence service broke into the anonymous Tehran building that housed Iran’s secret nuclear files and smuggled half a ton of documents and compact discs back to Israel the same night.

The New York Times in an article posted on its website Monday night quoted a senior Israeli official who spoke on condition of anonymity as saying that the Mossad discovered the warehouse in February 2016 and since then kept the building under surveillance.

Mossad operatives broke into the building in January, took the original documents and returned to Israel the same night, the official told The Times.

In his nationally televised broadcast, first in English, on Monday night, Prime Minister Benjamin Netanyahu described the hiding place of the documents.

“This is where they kept the atomic archives. Right here. Few Iranians knew where it was, very few, and also a few Israelis,” the Israeli leader said. “Now, from the outside, this was an innocent looking compound. It looks like a dilapidated warehouse. But from the inside, it contained Iran’s secret atomic archives locked in massive files,” he said.

On stage with Netanyahu were shelves of binders and a moveable wall of CDs.

“And here’s what we got. Fifty-five thousand pages. Another 55,000 files on 183 CDs. Everything you’re about to see is an exact copy of the original Iranian material,” he said, adding: “You may want to know where are the originals? Well, I can say they’re now in a very safe place.”

The unnamed official told the newspaper that President Donald Trump was told of the operation to retrieve the documents by Mossad Director Yossi Cohen when he visited Washington, D.C., in January.

The material was not unveiled until now because the documents had to be analyzed and translated from Persian, the official said.

Trump is set to decide by the middle of next month whether the U.S. will remain in the Joint Comprehensive Plan of Action, as the deal is known.

In a meeting with reporters in the White House Rose Garden shortly after Netanyahu’s presentation, Trump said that the disclosure “showed that I was 100 percent right” in criticizing the Iran nuclear deal.

“That is just not an acceptable situation,” he also said.

Trump declined to say what he would decide on the Iran nuclear deal.

“We’ll see what happens. I’m not telling you what I’m doing, but a lot of people think they know,” he said. “On or before the 12th, we’ll make a decision. That doesn’t mean we won’t negotiate a real agreement.

In a statement following Netanyahu’s presentation, the U.S. press secretary said “The United States is aware of the information just released by Israel and continues to examine it carefully.”