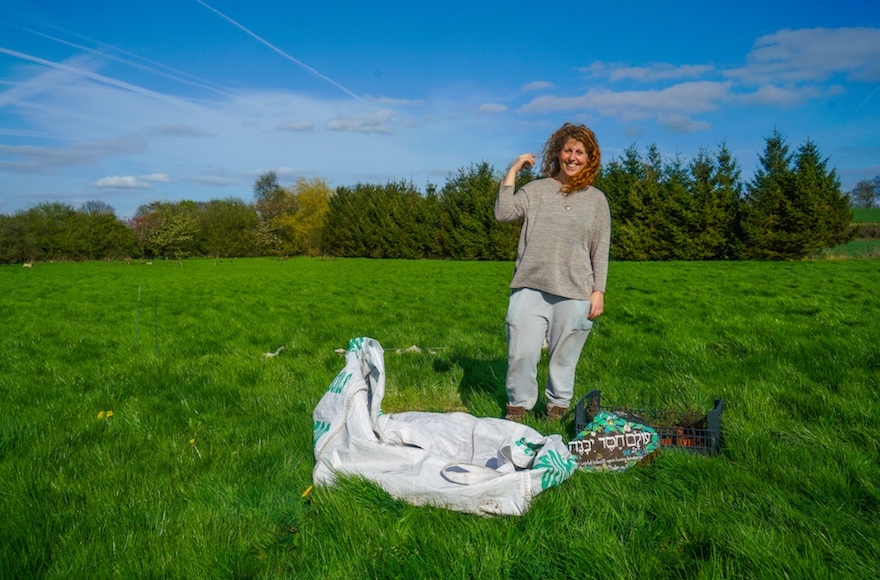 CHELSFIELD, United Kingdom (JTA) — Five years ago, Talia Chain and her husband had the best-laid plans for living in a central London apartment surrounded by young and hip high-tech professionals like them.

Unaffordable to most Britons, this English dream was well within reach for Chain, the founder of a fashion marketing startup, and Josh Charig, a successful data analyst and beer connoisseur.

But through an unlikely turn of events, the Jewish couple from London city instead moved last year to the capital’s agricultural outskirts, where they are both involved in setting up the first Jewish communal farm on British soil in decades.

With funding from a local philanthropist and online donors, the couple, both 29, and a handful of staff and volunteers have created a space where Jews of all ages can connect to farming and the environment through their faith — and vice versa.

“Judaism is at its core an agricultural religion, but so many of us have lost touch with that cornerstone of our faith,” said Chain, a self-described “city girl” whose new look features baggy pants, low-heeled boots and a wild mane of wavy red hair. But amid growing popularity for environmentalism, especially among young Jews who shun organized religion, “there is a great potential for engagement,” she said.

That’s why in 2016, Chain set up Sadeh farm, whose name means “field” in Hebrew, at the Skeet Hill House — a Jewish community resort 15 miles southeast of London’s center. It has an indoor swimming pool, kosher kitchen, dormitories and a large plot of land that once was disused and covered in weeds.

A year into the project, the weedy field has a compost heap full of organic waste from the kitchen; a growing orchard with biblical fruit trees including a fig and an apple; a Havdalah circle where visitors and residents of the farm gather weekly for a religious ceremony marking the end of Shabbat; and a shmitta area — a part of the land that is allowed to lie fallow for one year out of every seven, as commanded in the Torah. In the future, Chain said, the farm will also feature animals and even wildlife.

Sadeh welcomes hundreds of visitors each month, many of whom are students from Jewish schools in the London area who stay overnight, but also workers from Jewish and other organizations who come for a weekend retreat.

The traffic is not a new development. Jewish groups have been coming here since the Skeet Hill House’s establishment in the 1940s as a resort for poor Jewish children in bombed-out London. Jewish guests ever since have come to Skeet Hill House to frolic in the pool, play soccer and ride horses.

“But, astonishingly, there wasn’t any Jewish farming done on this, well, Jewish farm,” Chain said.

This has changed, though, thanks to a donation of $200,000 by David Dangoor, an Iraq-born British philanthropist. Children visiting the site get to work the soil, tend to plants and work the compost heaps. Adults on company retreats attend pickling workshops led by Chain and her handful of volunteers. Sadeh has raised an additional $23,000 through crowdfunding online. The farm still needs at least that much money for Chain to realize her plans for it, she said.

Workers and visitors pray and sing outdoors, discuss Jewish texts about nature and learn hands-on about the countless Jewish laws and customs connected to farming and how they can be applied for stopping waste, helping the poor and sustaining the planet, Chain said. There is also a Wednesday morning prayer service.

The guests also get to sleep in an old, squeaky three-story English dower house from the 18th century, complete with a fireplace, large garden-view windows and a resident friendly ghost named Lady Cynthia. Local legend has it that she was hanged after trying to escape through a secret tunnel from the Hart Dyke family, which once owned Lullingstone Castle and its lands, including what is now Sadeh. There is no historical evidence to support the myth, but it makes for scary stories on rainy English nights, Chain said. 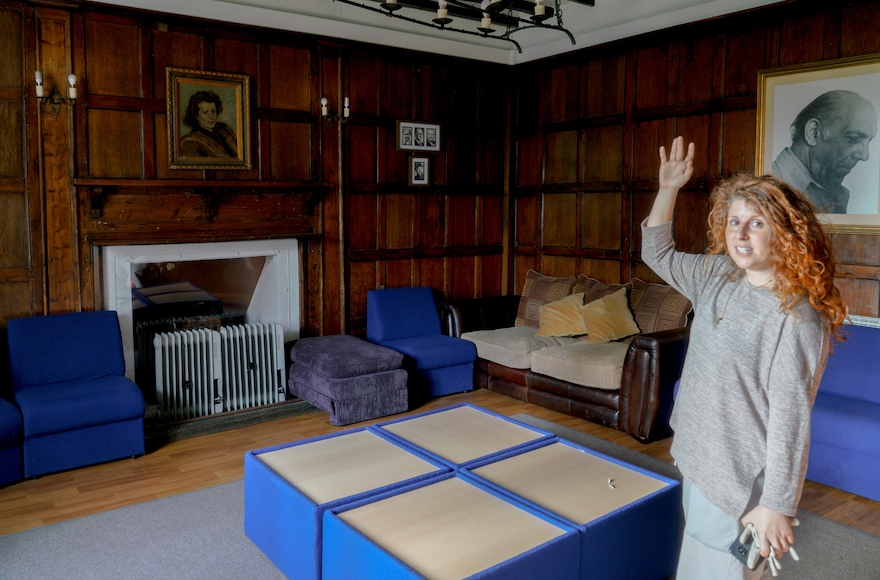 When Chain first began receiving guests at Sadeh, she was shocked at how some Jewish students “were disgusted to even touch the soil, they think of it as dirty.” Some “don’t dare eat a leaf” straight from a lettuce or bean plant.

“I think it’s devastating,” she said. “It’s a major disconnect between our people and our Torah, our faith, the basis for our entire tradition.”

In North America, Jewish farming is a pretty established phenomenon, with organizations like Hazon working to engage young Jews who care about the environment through Judaism’s agricultural elements.

There’s the Pearlstone Retreat Center outside Baltimore and Shoresh and its farmlands around Toronto. In 2010, California saw the opening of Urban Adamah — a West Coast sister farm of the Adamah – Hebrew for earth – a farm founded in 2003 in Falls Village, Connecticut. Its website says it “cultivates the soil and the soul to produce food, to build and transform identities.” Yiddish Farm in New Hampton, New York is, well, a farm for Yiddish speakers.

But Jewish farming was nonexistent in Britain, where this activity last happened on a large scale decades ago, at training camps for prospective immigrants to Zionist settlements in Israel.

It was during a three-month fellowship in 2015 at Adamah in Connecticut that Chain was inspired to establish something like it back home.

“When I went on the fellowship, I was bored with my job and feeling a disconnect with my Judaism. At Adamah it all fell into place,” said Chain, who is a granddaughter of the German-born British biochemist Ernst Chain. In 1945, her grandfather won a Nobel Prize for the discovery of penicillin, along with Alexander Fleming and Howard Florey.

Talia Chain’s passion for farming according to biblical principles is still unusual in the United Kingdom.

But her feeling of growing alienation from organized religion is quite common among British Jews, according to a 2016 study by Britain’s Institute for Jewish Policy Research. It found that synagogue membership in 2016 had declined by 20 percent since the 1990s in the United Kingdom, down to 79,597 Jewish households across the country. It is the lowest figure on record in decades.

This background had a significant role in David Dangoor’s decision to fund Sadeh, he said.

“Today it’s become more difficult for young, educated people to engage with Judaism. They’re just not attracted by the old paradigms and institutions,” he said. But the meeting point of environmentalism and Jewish spirituality, he said, could provide a new avenue for greater engagement.

Anti-Semitic persecution like the one that forced Dangoor’s family out of Iraq in the 1950s has prevented Jews from relying on the land in the Diaspora, he said.

“We’ve relied on our brains, instead, drifting away from the land.” Still, he added, “going back to the land is something that is almost instinctively built into us.”