Iran will not ‘renegotiate or add onto’ nuclear deal, its foreign minister says 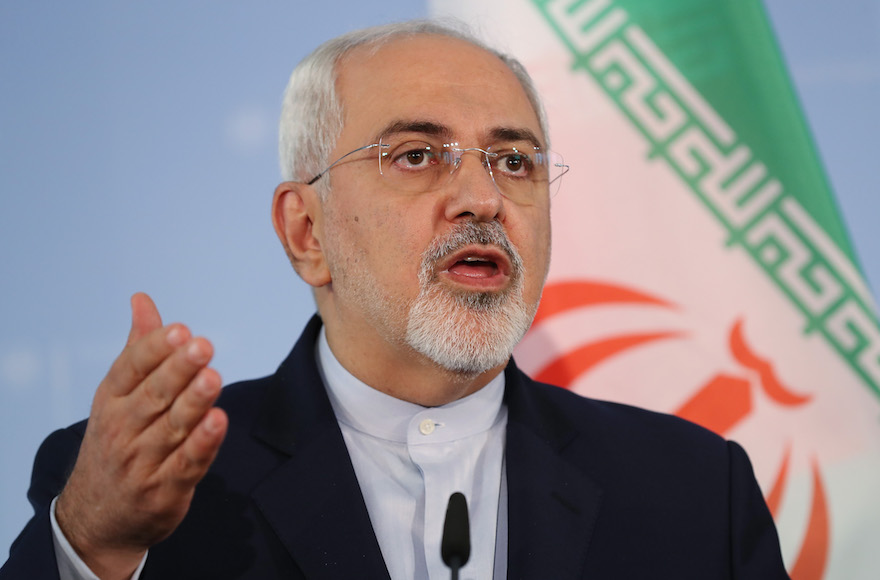 (JTA) — In a message aimed at President Donald Trump and the United States, Iran’s foreign minister released a video statement saying that Iran will not “renegotiate or add onto” the nuclear deal it signed with the world powers in 2015.

On Thursday, Mohammad Javad Zarif published the five-minute video, in which he speaks in perfect English, on YouTube and Twitter.

Zarif accused the United States of violating the deal, particularly by “bullying” others to prevent them from doing business with Iran.

“In the last year or so, we’ve been told that President Trump is unhappy with the deal, and it now appears that the response from some Europeans has been to offer the United States more concessions from our pocket,” Zarif said.

“This appeasement entails promises of a new deal that would include matters we all decided to exclude at the outset of our negotiations, including Iran’s defensive capabilities and regional influence. But please understand on both issues, it is Iran, not the West, that has serious grievances and much to demand.”

He went on: “Let me make it absolutely clear once and for all: We will neither outsource our security nor will we renegotiate or add onto a deal we have already implemented in good faith. Thus, the U.S. is well advised to finally start honoring its commitments or it, and only it, will have to accept responsibility for the consequences of not doing so.”

Trump has said he will decide by May 12 whether the United States will remain part of the deal known formally as the Joint Comprehensive Plan of Action.

On Wednesday, Reuters reported that Trump has “all but decided to withdraw” from the deal by that date, citing two unnamed White House officials and “a source familiar with the administration’s internal debate.”

The report said it is “unclear” exactly how Trump would leave the deal, and that there is a “chance” he would stay in to appease French President Emmanuel Macron.